Syrian government, Russia not given GPS data of clinic hit by strike 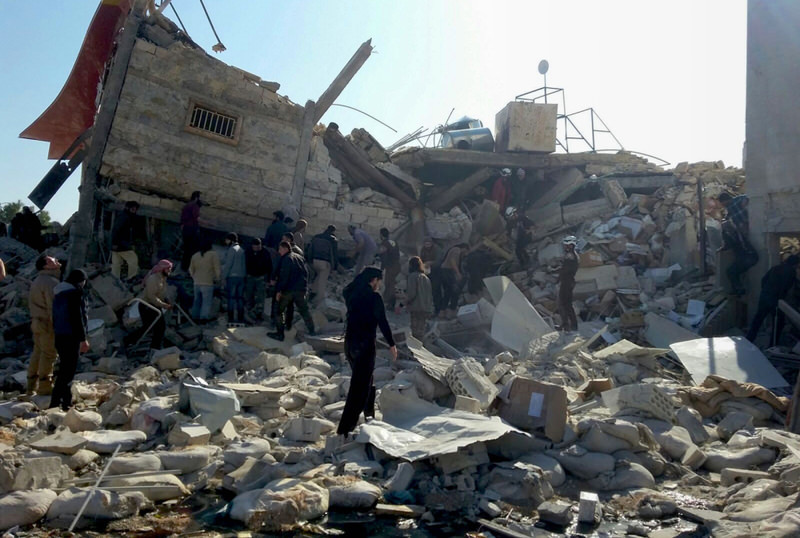 Syrians gathering outside a hospital supported by Doctors Without Borders in Syria's northern province of Idlib on Feb. 16, after the building was hit by suspected Russian airstrikes the previous day. (AFP Photo)
by Daily Sabah with AP Feb 20, 2016 12:00 am

Doctors Without Borders (DWB - MSF) said on Thursday that it took the wrenching decision not to formally inform Syria's government or its Russian allies about the location of some medical facilities such as the one hit by a deadly airstrike this week, amid concerns that doing so could open them up to being targeted amid the recent violence that has killed many civilians.

The charity said repeated attacks on health facilities during Syria's five-year civil war have led medical staffers to ask the group not to provide the GPS coordinates of some sites. This was the case with the makeshift DWB clinic in the Syrian town of Maaret al-Numan, which was hit four times in attacks on Monday, killing at least 25 people.

"Deliberate attacks against civilian infrastructures, including hospitals struggling to provide life-saving assistance, are routine," DWB International President Joanne Liu told reporters in Geneva. "Health care in Syria is in the crosshair of bombs and missiles. It has collapsed. Let me be clear: Attacks on civilians and hospitals must stop. The normalization of such attacks is intolerable."

Liu's comments came as the U.N. made new aid deliveries to five besieged towns and said it plans additional deliveries, hopefully to the 4.6 million Syrians living in hard-to-reach and besieged areas, as called for in an agreement by 18 key nations in Munich on Feb. 12. That agreement also calls for a cessation of hostilities within a week, which would mean Thursday, but there is no sign of a halt to fighting. U.N. spokesman Stephane Dujarric said Secretary-General Ban Ki-moon wants to see movement toward de-escalation of violence and a cessation of hostilities as soon as possible. "What we've seen recently goes against that," he said. "We see very worrying escalation of military developments."

Liu said DWB does not know who was responsible for the strikes, but the "probability" was that Syrian or Russian air power was to blame. She said DWB's policy of not informing Syrian or Russian officials about the location of health facilities has become a "hot topic" inside the organization. Also on Thursday, the head of a U.N. task force on humanitarian aid for Syria said that 114 "big trucks" delivered life-saving supplies over the past 24 hours for 80,000 people in five besieged areas of the country.

U.N. special envoy to Syria, Staffan de Mistura, said from Damascus that the International Syria Support Group is "very encouraged by the fact" that the 114 trucks were able to reach thousands of people in need and appealed for more such action.

"I must say that this was a difficult test for the United Nations to show they could do it, for the government and for the armed opposition," de Mistura was quoted as saying in a statement. "Of course, we should go beyond that, we should go far beyond that in order to be able to reach everyone in Syria who is either besieged or in need of being assisted." He added that the idea of air drops in areas besieged by DAESH and other factions has become a concrete proposal that the U.N. wants to work on.

In Brussels, European Union leaders were expected to call on Russia and Syrian President Bashar Assad's forces to halt attacks on moderate opposition groups and immediately end all airstrikes. A draft statement for their summit starting Thursday, seen by The Associated Press, calls on "Russia and the Syrian regime to stop at once attacking moderate opposition groups" and for "an immediate cessation of aerial bombardments in civilian areas."

DWB said that since the war broke out in 2011, the Syrian government has not granted permission for it to provide medical aid in the country, despite its repeated requests. Because of that, its work has been limited to areas held by opposition forces. After the latest strikes, DWB operations director Isabelle Defourny said she expects affiliated medical staffers in Syria will now ask that their locations be specified to government officials.

"We gave to the Russian ambassadors in Paris [and] in Geneva coordinates for three hospitals located in very intense conflict zones, but not for all of them, and it was a decision taken together with the medical staff of the health facilities that we support," she said. "It was a huge discussion inside [DWB] and mainly with the medical directors of the health facilities that we support inside Syria," Defourny added. "The staff of the hospital [and] the director of the hospital didn't know if they would be better protected if they give the GPS or not."

She said the Maaret al-Numan hospital was widely known and had already been hit by strikes in the past. "Those are not underground or invisible hospitals," she said of the medical sites, alluding to the difficulty of the decision not to formally identify its location.

Even giving GPS coordinates is no guarantee of protection, she said, citing a deadly U.S. airstrike in October that destroyed a DWB hospital in Kunduz, Afghanistan. That hospital had been identified to both Afghan and U.S. forces fighting an insurgency there.

Also on Thursday, DWB provided a report documenting war wounded and deaths that draws on information from 70 "makeshift hospitals" and clinics it works with in Syria. While only "a small fraction of the health facilities in Syria," those medical facilities recorded a total of 7,009 people dead and 154,647 people wounded last year.

The Syrian civil war has entered its fifth year and it is estimated that more than 300,000 Syrians have lost their lives and 11 million displaced during the war.
RELATED TOPICS