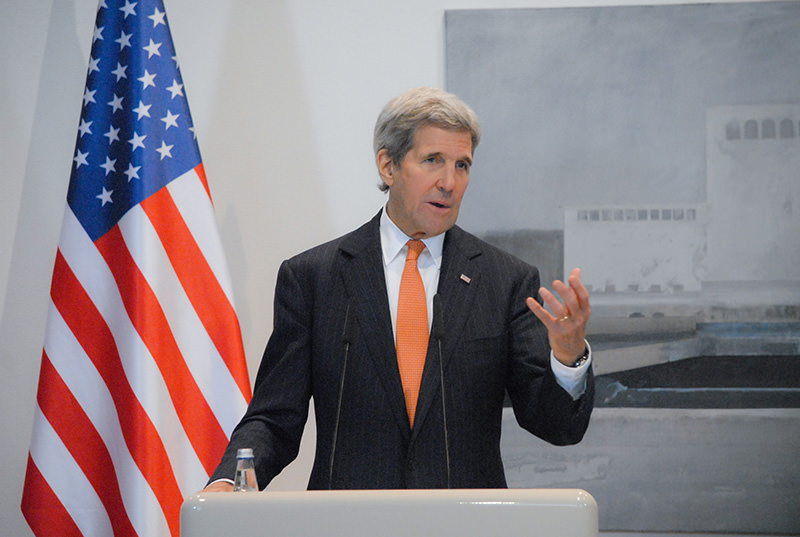 by Associated Press Feb 21, 2016 12:00 am
Secretary of State John Kerry said Sunday that a "provisional agreement" has been reached on a cease-fire that could begin in the next few days in Syria's five-year civil war.

Kerry said he spoke in the morning with Russian Foreign Minister Sergey Lavrov to discuss terms of a cease-fire and the two now must reach out to the parties in the conflict.

He declined to go into the details of the agreement, saying it "is not yet done." But he said he hoped President Barack Obama and Russian President Vladimir Putin would talk soon and that after that, implementation could begin.

The Russian Foreign Ministry seemed to stop short of Kerry's announcement. The ministry said Lavrov and Kerry spoke on the phone Sunday for a second day in a row and discussed "the modality and conditions" for a cease-fire in Syria that would exclude groups that the U.N. Security Council considers terrorist organizations.

Fighting has intensified in Syria during recent weeks and an earlier deadline to cease military activities was not observed. The United States, Russia and other world powers agreed Feb. 12 on a deal calling for the ceasing of hostilities within a week, the delivery of urgently needed aid to besieged areas of Syria and a return to peace talks in Geneva.

U.N. envoy Staffan De Mistura halted the latest Syria talks on Feb. 3, because of major differences between the two sides, exacerbated by increased aerial bombings and a wide military offensive by Syrian troops and their allies under the cover of Russian airstrikes. The humanitarian situation has only gotten worse, with an estimated 13.5 million Syrians in need of aid, including 6 million children.

"Peace is better than more war," Kerry said, standing next to Nasser Judeh, the foreign minister of Jordan, which hosts 635,000 Syrian refugees. "A political solution is better than then a futile attempt to try to find a military one that could result in so many more refugees, so many more jihadists, so much more destruction, and possibly even the complete destruction of Syria itself."

However, he reiterated the long-time U.S. position that any political solution to the conflict will not work if Syrian President Bashar Assad remains at the helm of the nation. "Make no mistake. The answer to the Syrian civil war will not be found in any military alliance with Assad," Kerry said. "Let me make that clear."

He said Russia now has to talk with the Syrian government and Iran, which backs Assad, and the U.S. has to talk with the opposition and members of the International Syria Support Group. He said he knows that not every party will automatically agree to the agreement reached for a ceasefire.

"There is a stark choice for everybody here," Kerry said.

"I know how much work remains and I don't know if everyone is going to meet their commitments," Kerry said. "I can't vouch for that the United States can't make certain of that."

He said enforcement issues still need to be resolved in addition to how any breeches will be addressed.

"These are details that have to be determined if it going to be effective," Kerry said.
Last Update: Feb 21, 2016 2:37 pm
RELATED TOPICS