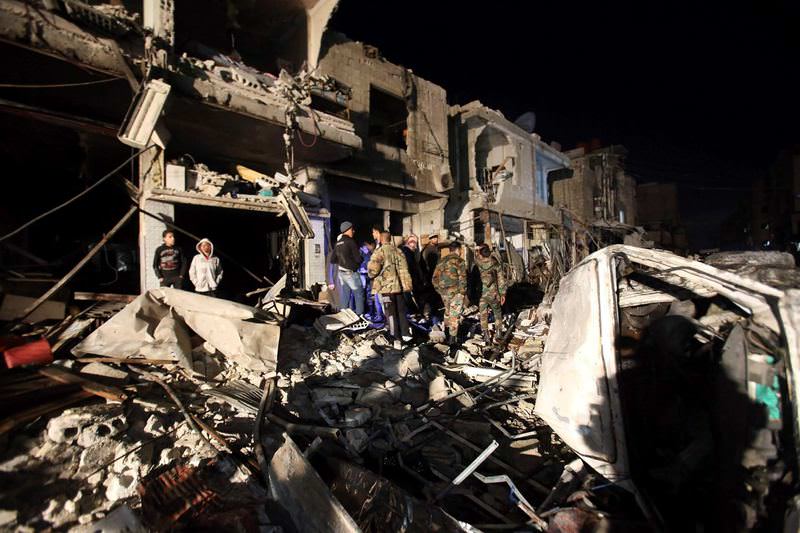 Syrians inspect a damaged building in Damascus after DAESH carried out suicide attacks that left dozens dead.
by Daily Sabah with Wires Feb 23, 2016 12:00 am

DAESH bombs rocked Damascus and Homs and killed nearly 130 people as the U.S. and Russia were struggling for a local cease-fire between the Syrian regime and moderate rebels. U.S. President Obama and Russian President Putin are expected to discuss the truce this week

Bombings claimed by DAESH in the Syrian cities of Damascus and Homs killed nearly 130 people on Sunday, highlighting the threat posed by the extremists as the country's warring factions fight for the northern city of Aleppo and world powers chase an elusive cease-fire. The blasts came as U.S. Secretary of State John Kerry said that a "provisional agreement" has been reached on a cessation of hostilities that could begin in the next few days. But he acknowledged that it's not finalized and all parties might not automatically comply.

A series of blasts ripped through the Sayyida Zeinab suburb of Damascus, killing at least 83 people and wounding more than 170, the official SANA news agency said. The Britain-based Syrian Observatory for Human Rights, which relies on local Syrian activists, said the blasts killed 62. SANA said the bombs went off near schools during the afternoon rush hour. The bombings in the central city of Homs killed at least 46 people and wounded dozens, according to Syria's Foreign Ministry. The Observatory said 57 people, including 11 women, were killed by two car bombs set off in a mostly Alawite neighborhood. Syria's Bashar Assad hails from the Alawite minority.

DAESH claimed both attacks. The deadly blasts may strengthen the government's argument that it should press ahead with a major offensive in the north of the country, where troops backed by Russian airstrikes are close to sealing off Aleppo, once Syria's largest city and commercial hub. Syrian insurgents, including Western-backed rebels, seized several neighborhoods in 2012. The heavy fighting near Aleppo led to collapse of peace talks earlier this month. World powers later agreed on a "cessation of hostilities" to begin within a week, but the deadline passed with no letup in the fighting. Kerry has since reached out to his Russian counterpart, and during a visit to Jordan on Sunday, said they had struck a "provisional agreement" and must now reach out to the opposing sides on the ground. Russia is a key ally of Assad's government, while the U.S. backs some of the rebels fighting to overthrow him. Kerry declined to go into the details of the agreement, saying it "is not yet done." "The modalities for a cessation of hostilities are now being completed," Kerry said, adding that it was "possible over the course of these next hours."

Efforts intensified for a partial truce in Syria as fighting raged near Aleppo on Monday and after the country suffered its bloodiest extremist attack in nearly five years of war. U.S. President Barack Obama and Russian counterpart Vladimir Putin are expected to speak in the coming days after Washington announced a provisional agreement had been reached on an imminent 'cessation of hostilities'. The partial ceasefire would not extend to international efforts to combat DAESH and other militant groups, complicating its implementation. Announced by top diplomats in Munich earlier this month, the ceasefire failed to take hold by last Friday as initially planned.

Syria's main opposition umbrella group, the High Negotiations Committee (HNC), was meeting in the Saudi capital Riyadh on Monday for talks on the ceasefire and peace talks efforts. Spokesman Monzer Makhous told AFP the meeting was expected to continue for two or three days. The HNC has said any ceasefire must include provisions for Russia, Iran and foreign militia forces backing the regime to stop fighting. Russia launched air strikes in Syria last September against what it said were "terrorists" but has been accused of bombing non-extremist rebel forces in support of Assad, a longtime ally. Iran has sent military advisors to Syria and the Tehran-backed Lebanese Shiite movement Hezbollah has deployed at least 6,000 militants to fight with Assad.
RELATED TOPICS