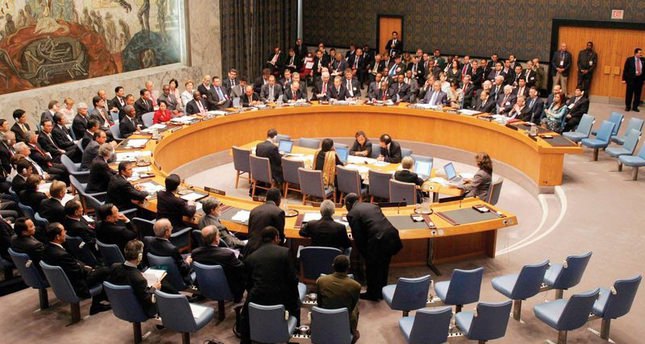 by Daily Sabah with AP Feb 23, 2016 12:00 am
War crimes are "rampant" in Syria, and the conflict has become "a multisided proxy war steered from abroad by an intricate network of alliances," U.N. investigators said in a new report Monday.

In a swipe at the U.S., Russia and their allies, the Independent International Commission of Inquiry on Syria said the international powers and regional countries ostensibly pushing for a peaceful solution are the same nations that "continue to feed the military escalation."

The new report came as U.S. officials said the U.S. and Russia had agreed on a new "cessation of hostilities" in Syria that will take effect on Saturday. A similar cessation announced Feb. 11 and set to begin last week did not take place, while Russian airstrikes continued to support a Syrian government offensive in the northern province of Aleppo.

Paulo Sergio Pinheiro, chair of the commission established by the U.N. Human Rights Council, enthusiastically welcomed efforts launched in Vienna and Munich to find a political solution to the conflict, which will enter its sixth year in March with over 250,000 people killed.

The U.N. investigators warned that "the fractured Syrian state is on the brink of collapse" and said there is a growing risk of "internationalization of the conflict."

Crimes against humanity continue to be committed by government forces and the Daesh terrorist organization, their report said.

"The fight for control of areas in the hands of enemy forces is carried out with blatant disregard for human life and the laws of war," Pinheiro told a news conference launching the report. "Not a single warring party respects international humanitarian law, the Geneva conventions, all the conventions of human rights."

The investigators urged the U.N. Security Council to take action to bring the perpetrators to justice, possibly by referring the situation in Syria to the International Criminal Court or to "an ad hoc tribunal." Russia and China, allies of Syria, vetoed a referral resolution in May 2014.

"U.N. members need to step up and make clear that any plan for Syria's future, if it's to be meaningful and durable, will need justice and respect for human rights at its core," said Balkees Jarrah, senior counsel at Human Rights Watch's International Justice Program. "The brutality of the past five years is far too horrendous to be swept under the rug."

The report said the Syrian military is facing a severe shortage of manpower, which has forced it to rely on a growing number of foreign militia in recent attacks, "implying an increasing fragmentation of the government forces and the decentralization of Syrian state authority."

While Daesh remains in control of large swathes of east and northeast Syria, the investigators said it has recently come under mounting pressure from different fighting groups. One result is its reversion to tactics including the use of explosive devices and the carrying out of operations in enemy territory, often using sleeper cells.

"While no party seems able to achieve 'victory,' all appear to have sufficient capacity to sustain operations for the foreseeable future, perpetuating death and destruction along the way," the investigators said.

The report paints a grim picture of what the investigators called "the destruction of the country and the devastation of the nation" giving numerous examples of attacks carried out by government forces, opposition groups, Russia and the U.S.-led coalition that killed civilians.

The targeting of hospitals and medical personnel remain "an ingrained feature of the Syrian conflict," the investigators said.

According to the report, government forces targeted hospitals and medical clinics in areas not under their control, including in Aleppo where fewer than 10 of the 33 hospitals open in 2010 in what was once the country's largest city and commercial hub are still functioning.

Daesh has also directed multiple bombings at medical centers in areas recently seized by the Democratic Union Party (PYD) and its armed wing People's Protection Units (YPG) terrorists, including a triple bombing of a clinic in Tel Tamer on Dec. 10 that killed more than 50 civilians, it said.

The investigators also accused all warring parties of carrying out "deliberate and indiscriminate attacks on schools," which is one reason that more than 3 million children in the country aren't going to classes.

The investigators, who interviewed 415 witnesses and victims inside and outside Syria between July 2015 and January 2016, called the destruction of cultural sites by Daesh militants "a war crime."

They said civilians have been deliberately killed and persecuted for their ethnicity or religion.

The report also cites the Daesh's use of slave markets where fighters and civilian supporters buy Yazidi women and girls, some as young as 9 years old. Daesh and the al-Nusra Front terrorists also hold hostages for ransom to generate revenue, it said.
RELATED TOPICS