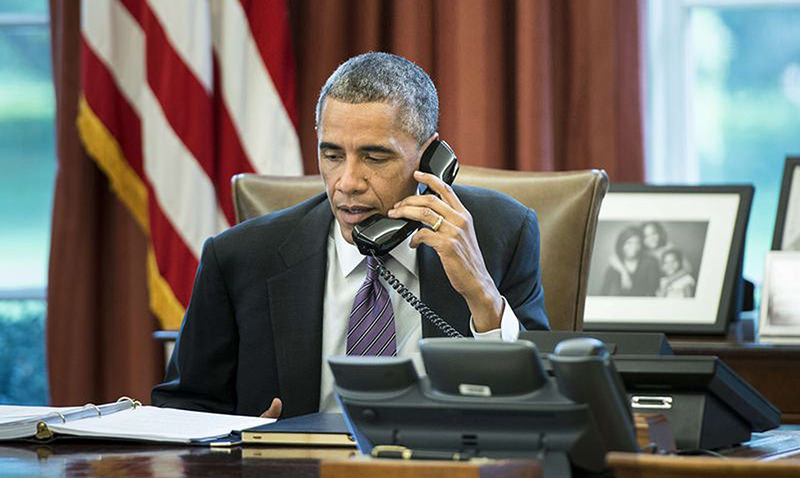 | AFP Photo
by Compiled from Wire Services Feb 23, 2016 12:00 am
U.S. President Barack Obama on Tuesday spoke with the heads of Germany, France and Britain about the agreement to end hostilities in Syria, the White House said.

The leaders "called on all parties to implement it faithfully," and "underscored the importance of an immediate halt to the indiscriminate bombing of civilian populations," the White House said in a statement.

U.N. envoy Staffan de Mistura halted the latest Syria talks in Geneva on Feb. 3 because of major differences between the two sides, exacerbated by increased bombings and a large-scale government offensive near the northern city of Aleppo.

It was not immediately clear if de Mistura will set a new date for the talks, initially scheduled to resume Thursday. He was quoted last week by the Swedish newspaper Svenska Dagbladet as saying they won't resume Feb. 25 because he cannot "realistically" get the parties back to the talks by then.

A new humanitarian aid convoy of 44 trucks entered the besieged Damascus suburb of Moadamiyeh, Syria's state news agency SANA reported Monday. The delivery was supervised by the Syrian Arab Red Crescent and the U.N., it said.

Assad regime on Tuesday accepted a proposed U.S.-Russian cease-fire that is to go into effect later this week, but reserved the right to respond to any violations of the truce. The main opposition and moderate opposition umbrella group also approved the deal and set its own conditions.