Next round of Syria peace talks to begin on March 9: UN envoy de Mistura 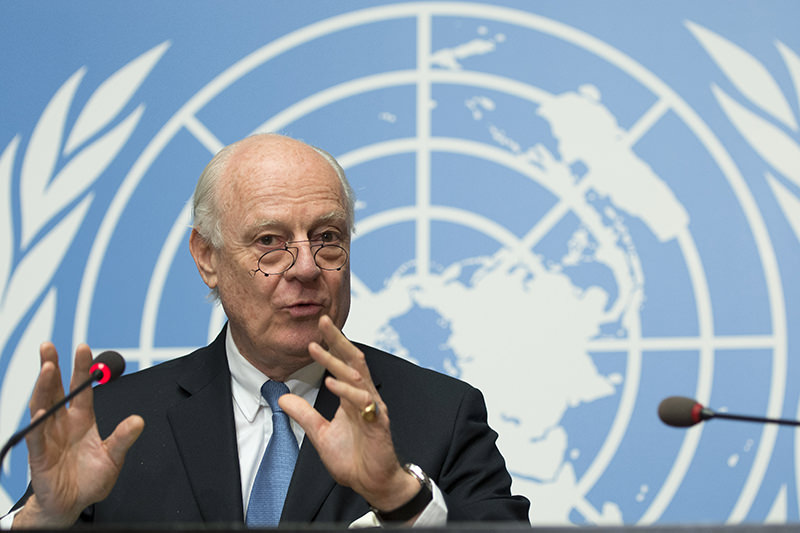 Staffan de Mistura, UN Special Envoy of the Secretary-General for Syria, speaks during a press conference about the beginning of a cessation of hostilities in Syria. (AP Photo)
by Mar 01, 2016 12:00 am
The United Nations will begin the next round of Syria peace talks on March 9, U.N. Syria envoy Staffan de Mistura told Reuters on Tuesday.

"We are delaying it to the afternoon of the 9th for logistical and technical reasons and also for the ceasefire to better settle down," de Mistura said. "I will not delay it further."

Since an agreement to halt nearly five years of fighting came into force on Saturday, the Syrian government and the opposition have accused each other of violating the deal although international observers have reported a decline in violence.

De Mistura said earlier that he could slightly delay the start of the Geneva talks, which had been pencilled in for Monday, March 7, depending on the situation on the ground.

"We don't want discussions in Geneva to become a discussion about infringements or not of the ceasefire, we want them to actually address the core of everything," he said in an interview.

The United Nations hopes that the cessation of hostilities will allow humanitarian aid to be sent into besieged areas and provide an opportunity to revive the peace talks, which collapsed before they even started a month ago.

It was up to the United States and Russia, who drew up the cessation of hostilities agreement, to share information and police the truce because the United Nations was not involved in that process, de Mistura said in an interview at the United Nations in Geneva.

This would require both sides to share common maps of the battlefield and monitor the situation with drones and satellites as it would not be possible to deploy thousands of observers on the ground. The United Nations only had general maps of the situation before the ceasefire, he said.

De Mistura said he expected to see attempts to disrupt the ceasefire, and these needed to be contained to avoid them spreading and undermining the credibility of the truce.

After an abortive first round of the Geneva peace talks, which ended on Feb. 3, de Mistura wants the Syrian sides to focus on constitutional reform, governance, and elections to be held in 18 months.

Prisoner releases would also be "very much up front on the agenda", he said.

The war has created more than five million refugees, who must have the chance to vote in any future election, de Mistura said.

He already had reports from Damascus that many who were thinking of leaving were rethinking that decision because of the cessation of hostilities, "as fragile and delicate as it is".

"The moment we have, God willing, a real cessation of hostilities, humanitarian access, and implementation of these three points - new governance, constitution and elections - I can bet that many of them not only will not leave but will return, especially if we have a massive 'Marshall Plan' to rebuild Syria," de Mistura said.