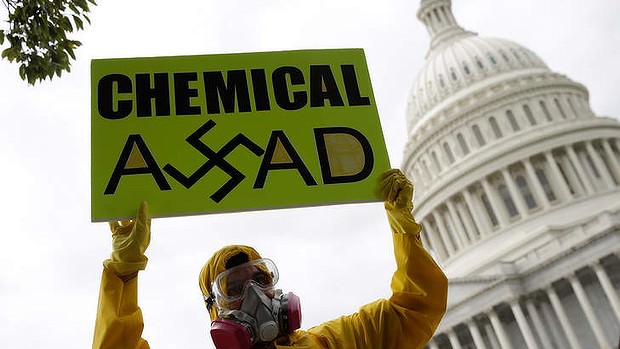 Syrian American protesters outside the US Capitol urging Congress to support President Obama in striking Syria for using chemical weapons against its own people. (AFP Photo)
by Daily Sabah with Wires Mar 02, 2016 12:00 am

The United States is concerned about reports of Syrian government tank and artillery attacks against civilians in several areas, as well as possible use of chemical weapons, despite the ceasefire declared on Saturday, said the U.S. State Department on Wednesday.

"We are concerned about reports of Syrian regime tank and artillery attacks against civilians near Latakia, near Homs and Hama, as well as around Damascus," State Department spokesman Mark Toner said at a news briefing.

He said the U.S. had shared their reports with other members of the International Syria Support Group, including Russia and Iran, and urged all sides to exercise restraint. Russia and Iran support the Syrian government in its war against opposition groups.

Israeli Defense Minister Moshe Yaalon stated on Tuesday that forces loyal to the Assad regime have used chemical weapons against civilians since the start of a ceasefire, aimed at preparing for an end to the five-year civil war.

"The regime used military grade chemical weapons and have lately been using materials including chlorine against civilians, including, in these very days after the supposed ceasefire, dropping barrels of chlorine on civilians," Israeli Defense Minister Moshe Yaalon said in a speech to a conference organized by the New Tech military and aviation group in Airport City, near Tel Aviv. He did not provide further details.

The putative ceasefire, sponsored by Russia and the U.S., began on Saturday and has been dogged by opposition charges of non-compliance by Damascus – something which Bashar Assad has denied. It does not apply to missions against DAESH and Jabhat al-Nusra terrorist organizations.

A U.S. Congress committee on Wednesday proposed a resolution urging the Obama administration to establish a U.N. tribunal to investigate war crimes by the Syrian government.

Condemning "gross violations of international law amounting to war crimes and crimes against humanity by the government of Syria, its allies, and other parties to the conflict in Syria," the resolution from the Foreign Affairs committee proceeded without objection, one day after being introduced by Republican congressman Christopher Smith.

The resolution urges the Obama administration to establish additional mechanisms to protect civilians and to ensure consistent access to humanitarian aid in Syria.

The Congress also proposed another resolution to express rejection of DAESH targeting Christians, Yazidis, Turkmen, Kurds and other ethnic minorities in the region that lawmakers said constitutes "war crimes," "crimes against humanity" and "genocide." None of the bills being promoted have the force of law.

Syria's five-year civil war has left at least 250,000 dead and more than 11 million displaced from their homes, according to the UN.