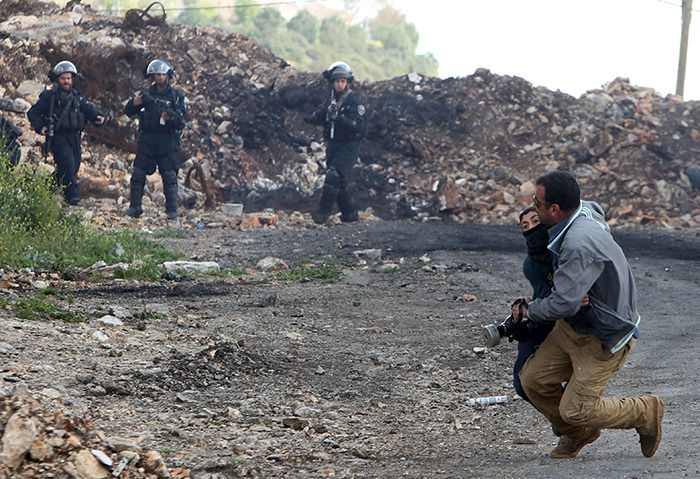 A Palestinian man carries a boy after he was injured during clashes with Israeli forces after a demonstration against the expropriation of Palestinian land in theWest Bank, March 4, 2016 (AFP Photo)
by Mar 04, 2016 12:00 am
Israeli forces demolished dozens of structures including a school in the northern West Bank this week, leaving 10 families homeless, the United Nations said on Friday.

The demolitions took place on Wednesday in the village of Khirbet Tana, south of Nablus in the northern West Bank.

In total, 41 structures were destroyed, displacing 36 Palestinians including 11 children, the .UN.'s humanitarian body said in a statement.

COGAT, the defense ministry body responsible for coordinating Israeli government activity in the Palestinian territories, put the number of structures at 20.

It said demolition orders were issued in advance.

The army regularly destroys homes it says have been built without permission from the Israeli authorities.

Palestinians and their supporters say it is extremely difficult for them to obtain permits in the part of the West Bank under full Israeli control, known as Area C, which accounts for about 60 percent of the territory.

Last week the European Union hit out at Israeli authorities after they demolished a school funded by the French government.

Nickolay Mladenov, U.N. special coordinator for the Middle East peace process, said last month the number of such demolitions has tripled on average since the start of the year.