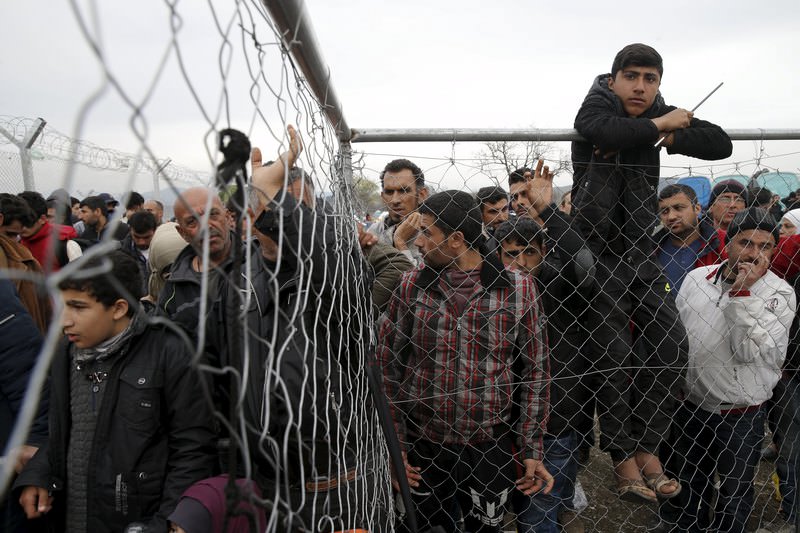 by Anadolu Agency Mar 06, 2016 12:00 am
"There is not enough space for everyone in Greece and in Turkey," Greek Foreign Minister Nikos Kotzias said Sunday.

"There is no way (to get) from Greece to Central or Northern Europe," Kotzias added, speaking to Anadolu Agency in an exclusive interview, ahead of Monday's EU-Turkey summit in Brussels on the constant refugee influx.

Greece is struggling to cope with the flow of people that are either escaping war zones or seeking a better life in developed European countries.

More than 25,000 refugees and migrants are stuck in the country, as governments in Balkans and Austria announced they will not allow in more than 580 refugees per day.

The bottleneck is expected to worsen as the number of refugees arriving at the shores of Greece's Aegean islands from Turkish coasts has not fallen.

"We wish and we hope that Turkey will keep the economic migration on their side," Kotzias said. "We hope that all this movement will stop".

Kotzias emphasized that implementation of the readmission agreements between Turkey and the EU, which is set to start in June, is important. The agreements entail that Turkey take back illegal immigrants if they traveled to EU countries through the country.

Turkey, which hosts nearly 3 million refugee and migrants, last week accepted more than 300 economic migrants-originally from Morocco, Algeria and Tunisia-from Greece, in line with the already existing readmission agreement between the two countries.

"The EU also has to take care to implement these agreements too. It is not only on Turkey," he said.

Kotzias said that at Monday's summit, a list will be drawn up of countries whose immigrants will not be granted refugee status, as the situation of Afghan migrants remains uncertain.

Many Afghans were stuck in the country in the last two weeks as they are sent back from the Greek border town of Idomeni, refused by Macedonian authorities. There are also more than 11,000 refugees waiting in camps near the border, since Macedonia allows only 300 people through on average.

Kotzias also criticized the new visa regimes of Balkan countries and Austria reached at a meeting month without inviting Greek authorities. At the meeting, which Greece called an "unfriendly act", police chiefs from Macedonia, Serbia, Croatia, Slovenia, and Austria agreed to limit the number of migrants crossing their borders.

"We are not living in the 19th century, during the times Austria was an empire. We cannot put decisions of police directors above the decision of elected members, prime ministers, presidents," Kotzias said.

"The members of the European Union are trying to find ways to implement a solution. Outside, they (Austria and the Balkan countries) are taking another way, they are holding a conference of police directors. There should be a European solution, not a nationalist one," he added.