Europe must share burden with Turkey by taking in 'hundreds of thousands' of refugees: UNHCR chief 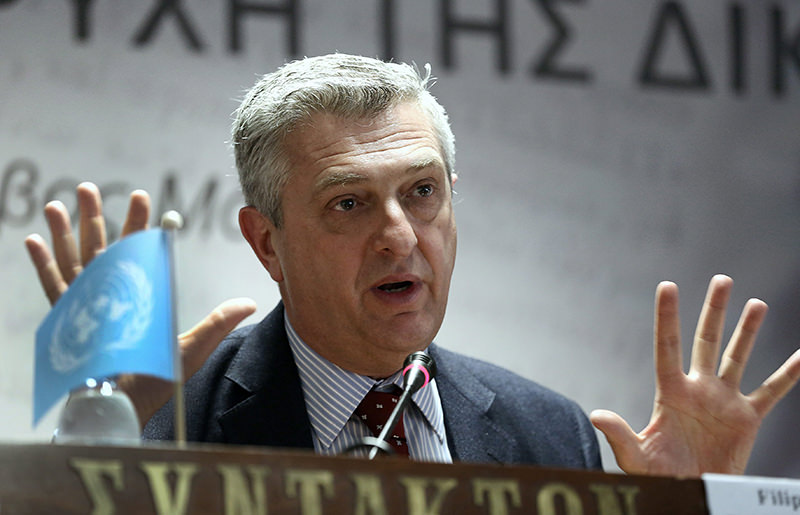 United Nations High Commissioner for Refugees, Filippo Grandi speaks during a press conference in Athens, Greece, 24 February 2016. (EPA Photo)
by Daily Sabah with Reuters Mar 07, 2016 12:00 am
The United Nations refugee chief said on Monday he was "very concerned" about what solution European leaders were debating and called for countries to share the burden with Turkey by taking in hundreds of thousands of Syrian refugees.

Filippo Grandi, U.N. High Commissioner for Refugees, told an event at the Geneva Graduate Institute: "In the joint action plan, the most important thing is to help Turkey bear the burden, responsibility by taking people ... not in the thousands or tens of thousands but in the hundreds of thousands".

Turkey offered the European Union greater help on Monday to stem a flood of migrants into Europe but raised the stakes by demanding more funds, accelerated membership talks and faster visa-free travel for its citizens in return.

"In the joint action plan, the most important thing is to help Turkey bear the burden, responsibility by taking people ... not in the thousands or tens of thousands but in the hundreds of thousands," Grandi said.

The European Union had failed to implement a series of "fairly good decisions" taken in 2015, including an agreement to relocate refugees from Greece and Italy to other EU states.

"If they had been implemented six or 12 months ago it would probably have made this whole flow more manageable," he told an event the Geneva Graduate Institute. "I am very concerned what the Council is debating and will conclude tonight."

This was "essentially still a refugee flow", dominated by Syrians, Iraqis and Afghans fleeing conflict, he said.

Grandi decried "a dangerous trend" along the Western Balkan migration route, where some authorities are excluding some nationalities, such as Afghans, without a fair individual hearing of their asylum claims, he said.

"It's all Syrians in, all Afghans out. We refuse that position, which may well prevail," he said.

Turkey is hosting more than two million Syrian refugees - the most of any country worldwide, providing protection and assistance and allowing some to work, Grandi said.

Peter Maurer, President of the International Committee of the Red Cross, told the annual conference that he had thought on taking up the post in 2012 that his agency "would never put our foot again on the European continent". But the ICRC now works on the Mediterranean's northern rim helping migrants.

"It is picking up the pieces of unilateral decisions of countries which don't care about the consequences on people or in humanitarian terms," he said.

EU leaders failed to agree on Monday to an ambitious plan put forward by Turkey to stop migrants flooding into Europe but welcomed the proposals and said that they will keep working on them in coming days.

At the emergency summit on the refugee crisis in Brussels, Prime Minister Ahmet Davutoğlu offered to take back all migrants and refugees who enter Europe from Turkey in future, in return for more money, faster visa-free travel for Turks and accelerated EU membership talks.

"Several countries really like the idea but cannot accept a deal tonight because of the very short preparation time. They will welcome the higher ambition but they can't nail down all the points today," the official said.

"There are some clarifications needed. We will work on it intensively in the coming days," he added.

The summit was continuing and EU leaders were due to meet Davutoğlu again for dinner later on Monday
Last Update: Mar 07, 2016 11:48 pm
RELATED TOPICS