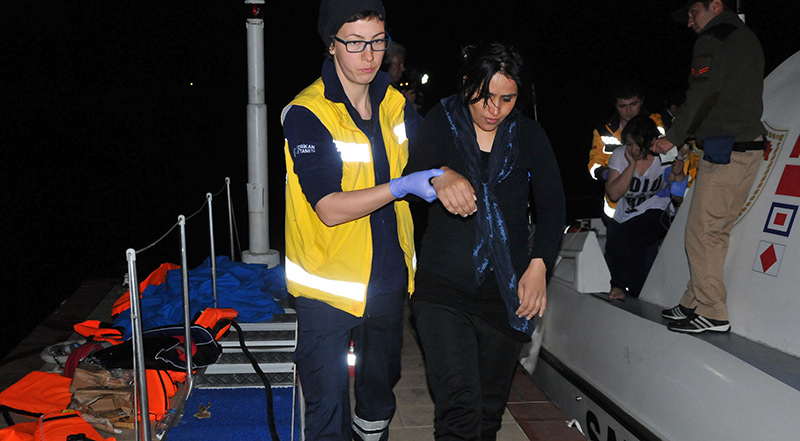 Rescuers give assistance to migrants arriving on the shore after being saved from the sea after their boat sank off on its way to Lesbos Island at Ayvacik district, Canakkale on March 10, 2016 (AFP Photo)
by Daily Sabah with Agencies Mar 10, 2016 12:00 am

A speedboat packed with Afghan and Iranian refugees sank off Turkey's Aegean Coast on Thursday. Five people aboard including a three-month-old baby girl drowned, while nine others were rescued by the Coast Guard. Two others aboard the boat are reported missing.

Authorities launched a search and rescue operation following the incident, while its cause remains unclear.

The refugees were among thousands who had flocked to Ayvacık, a Turkish town in the northwestern region of the country's Aegean shores, over the past two years. They had departed the coast only a few minutes before their boat started sinking, and were heading to the nearby Greek island of Lesbos.

Lesbos and other Greek islands lie near the Turkish coast, making them a favorable destination for hundreds of thousands of migrants who crossed to the islands aboard dinghies, speedboats and vessels last year and this year. Though the arrival of spring made the weather favorable for crossings, strong winds endangering the journeys remain prevalent in the region.

Though the majority of migrants seeking to reach Europe are Syrians fleeing the 5-year-old war raging on in their country, Afghans and people from other Asian countries also increasingly flock to Turkey's Aegean coast with the hopes of reaching Europe, where generous social benefits await them despite a tougher stance by the EU against admission of migrants.

Ayvacık is a town in the province of Çanakkale, which lies on the northwestern tip of Turkey's Aegean shore, a lengthy stretch of coastline with more than 2,800 kilometers. Elsewhere in Çanakkale, 16 Afghan migrants were injured when a minibus carrying them to the beach overturned yesterday. A pregnant woman among the injured remains in critical condition, while other victims are being treated for slight injuries at a hospital in Çanakkale's Bayramiç district. Authorities said the driver fled the scene after the accident.

On Sunday, a boat carrying Afghan and Syrian migrants sank off the coast of Didim, a town in southwestern Turkey, claiming the lives of 25 people in one of the deadliest disasters involving migrants. Four people accused of human smuggling were arrested following the incident.

Most migrants prefer sea routes due to the proximity of Turkey's coast to the Greek islands, but others prefer a land route from the northwest. Turkey is home to more than 2.5 million refugees from Syria where the war has displaced millions. Although Turkey has been praised for its exemplary hosting of refugees in camps and humanitarian aid to the displaced, it faces intense pressure by the European Union, which seeks to curb the exodus of refugees from Turkey into Europe.

Although the Aegean route is a shortcut to Europe for migrants, it is also probably the deadliest. Migrants are often forced to travel in shoddy, overcrowded boats and rafts with cheap life vests that are unable to keep them afloat if their boats sink. Strong winds on the Aegean Sea add to the dangers of the journey, although the onset of spring, which brings less severe winds, is expected to lead to a renewed influx of migrants who have mostly stayed away from the beaches in the past months.

Since January, the Coast Guard has intercepted 16,251 illegal migrants on the Aegean Sea and 171 people have died en route to the Greek islands. The International Organization for Migration (IOM) says more than 131,000 people arrived in Greece from the Eastern Mediterranean route, which includes the Aegean Sea, since Jan. 1, 2016. European Union Commissioner for Migration, Home Affairs and Citizenship, Dimitris Avramopoulos, has said Greece will likely receive another 100,000 migrants by the end of March. "Hundreds are arriving on a daily basis and Greece is expected to receive another 100,000 by the end of the month," Avramopoulos said earlier this month.

Ankara has sealed a draft deal with European Union to take back refugees who arrived in Europe in exchange of more funding to improve the lives of migrants in Turkey.