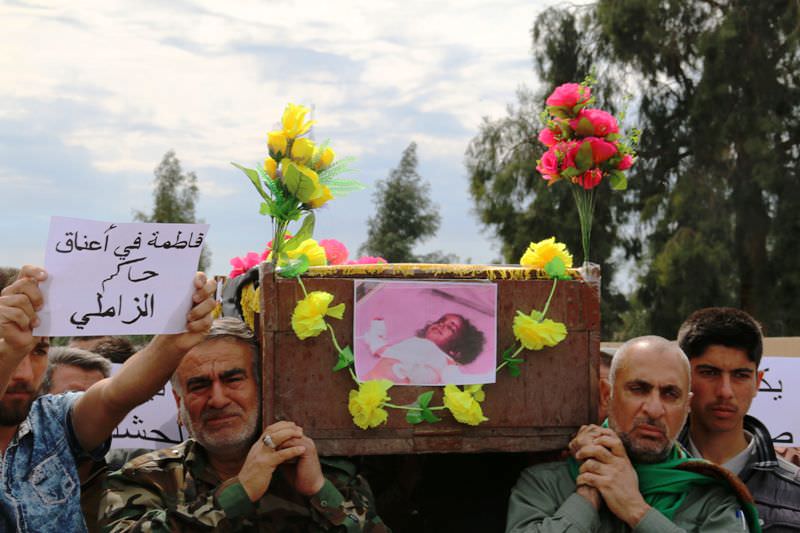 Iraqi Sameer Wais (R) carries the coffin of his three-year-old daughter, Fatima, who was killed following a chemical attack by Daesh. (AFP Photo)
by Mar 11, 2016 12:00 am

A three-year-old Iraqi girl wounded in a chemical attack by Daesh died in hospital Friday, medical sources and officials said.

"She died of respiratory complications and kidney failure... caused by the mustard agent used by Daesh in Taza," said Masrour Aswad, of the Iraqi Commission for Human Rights.

Fatima Samir was among the dozens of people hospitalised after a chemical attack carried out Wednesday on Taza, a town just south of the city of Kirkuk.

Aswad said the rockets fired on Taza from the nearby Daesh-held town of Bashir contained mustard agent. Other security officials said chlorine may have been used.

Intelligence officials have collected samples that are still being analysed.

Daesh has used both chemical agents in the past, a tactic which has caused few casualties and whose impact so far has been more psychological than military.

"International NGOs should come to the region to see the effects of such shelling and its consequences on the civilian population, including after the attack," he said.

The Pentagon announced on Thursday that the US-led coalition against Daesh had carried out air strikes on the jihadist group's chemical weapons sites.

It said the targets were identified following the capture in Iraq last month of a man presented as the group's top chemical expert.

The coalition's spokesman, Colonel Steve Warren, said Friday that the use of chemical weapons by Daesh was a concern but he also downplayed its importance.

"It's not a high threat... we're not losing too much sleep over it," he told reporters in a video call.