The cost of 5 years of conflict in war-torn Syria 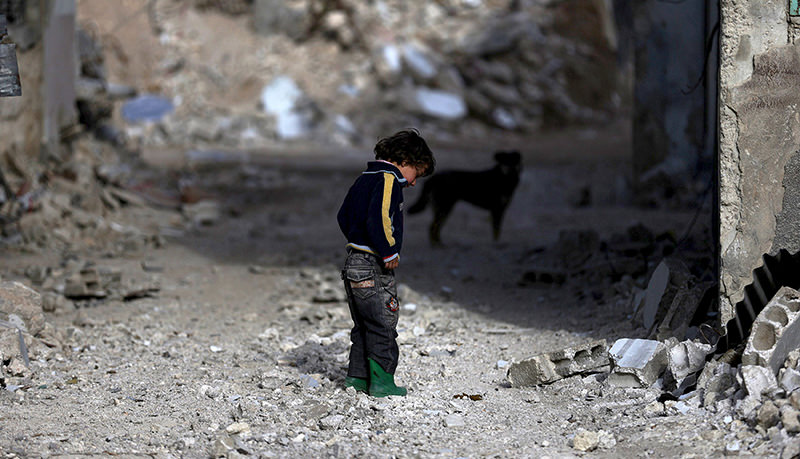 There are no reliably precise statistics on the number of people killed in Syria's war due to an inability to monitor on the ground. According to the U.N., over 250,000 people have been killed and well over a million wounded.

The cost of 5 years of conflict in war-torn Syriahttps://t.co/BI5WnuOthv#TheRevolutionContinues pic.twitter.com/icFN71OuVx

As the war in Syria enters its sixth year with no clear end in sight, here is a glance on what has been the cost of the war:

There are no reliably precise statistics on the number of people killed in Syria's war due to an inability to monitor on the ground. According to the U.N., over 250,000 people have been killed and well over a million wounded. But officials acknowledge that figure has not been updated in months. The Syrian Observatory for Human Rights, a Britain-based opposition group that monitors the war, puts the death toll at more than 270,000, while a recent report by the Syrian Center for Policy Research, an independent think tank, said 470,000 deaths have been caused by the conflict, either directly or indirectly.

Almost half of Syria's prewar population of 23 million has been displaced by the war. The U.N. refugee agency says there are 6.5 million displaced within Syria and 4.8 million refugees outside Syria. Much of the remaining population is in dire need of humanitarian assistance. The refugees have mostly fled to neighboring countries Jordan, Turkey, Lebanon and Iraq and a minority fled to Europe, where most arrive after a treacherous sea journey from Turkey.

Historic Aleppo, Syria's largest city and former commercial center, has been devastated. Its ancient souks and the famed Umayyad Mosque complex have been trashed, its 11th century minaret toppled. Homs city, Syria's third largest, lies in ruins, entire blocks reduced to rubble or uninhabitable husks of housing. Rebel-held towns around the capital Damascus such as Jobar, Douma and Harasta are now a vista of collapsed buildings and rubble. A preliminary World Bank-led assessment in six cities in Syria -- Aleppo, Daraa, Hama, Homs, Idlib, and Latakia -- released in January showed an estimated $3.6-4.5 billion in damage as of the end of 2014.

Almost all of Syria's UNESCO World Heritage sites have been either damaged or destroyed, including Aleppo in the north, the ancient town of Bosra in the south, the Crac des Chevaliers -- one of the most important preserved medieval castles in the world -- and the Palmyra archaeological site. Some have been damaged by fighting and shelling, others intentionally blown up or pillaged. The Daesh terror organization, which took control of Palmyra last year, destroyed many of its Roman-era relics, including the 2000-year-old Temple of Bel and the iconic Arch of Triumph. Numerous archaeological sites in Syria are being systematically targeted for excavation by criminals and armed groups. These include the Apamea archaeological site in Hama, the Tell Merdikh archaeological site in the Idlib region, and the Dura-Europos and Mari sites in Deir el-Zour.

There is no accurate estimate for the economic cost of the ongoing war. A recent report by the charity group World Vision and the consultant group Frontier Economics estimated that the conflict has so far cost Syria $275 billion in lost growth opportunities 150 times more than pre-war Syria's health budget. If the conflict ends in 2020, the cost of the conflict will grow to $1.3 trillion, it estimated. A World Bank report estimates the damage to the capital stock in Syria as of mid-2014 to be $70-80 billion. The situation has deteriorated greatly since then.

THE COSTS TO OTHERS

Turkey, Lebanon, Jordan and Iraq have borne the brunt of the economic impact of the war. Already in fragile situations, many of them are facing tremendous budgetary pressure. The World Bank estimates, for instance, that the influx of more than 630,000 Syrian refugees has cost Jordan over $2.5 billion a year. This amounts to 6% of GDP and one-fourth of government's annual revenue. Cash-strapped Lebanon is also stretched to a breaking point and Turkey says it can no longer afford to take in refugees.