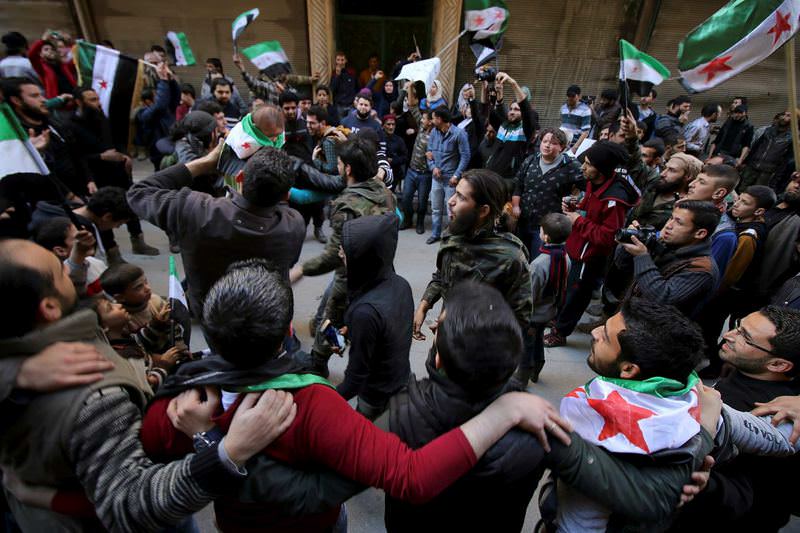 During the U.N.-brokered cease-fire Syrians organize peaceful anti-regime protests across the country.
by Daily Sabah with AFP Mar 14, 2016 12:00 am

As Syria marks the fifth anniversary of peaceful protests under a temporary cease-fire, the opposition said Bashar Assad has to leave his post while the regime said his ouster is a red line

Syria's warring sides clashed over the fate of Bashar Assad on Saturday, with the government vowing his ouster remains a "red line" for looming peace talks while the opposition vowed to see him go, dead or alive. The U.N.-brokered, indirect negotiations due to begin in Geneva on Monday are the latest international push to find a solution to Syria's five-year civil war, which has killed more than 270,000 people. Government negotiators are expected in Geneva on Sunday, where delegates from the main opposition group, the High Negotiations Committee (HNC) are already preparing.

But questions have been raised over whether the fresh talks will be more successful than the last round, which collapsed in February, as the two sides wrangled over the president's future. "We will not talk with anyone who wants to discuss the presidency... Bashar Assad is a red line," Syrian Foreign Minister Walid Muallem told a Damascus news conference. "If they continue with this approach, there's no reason for them to come to Geneva," he said. The HNC has repeatedly called for Assad's departure as a prerequisite for any deal, and chief opposition negotiator Mohammad Alloush said the president must go for peace talks to stand a chance. "We believe that the transitional period should start with the fall, or death, of Bashar Assad," he told AFP in a joint interview in Geneva. "It cannot start with the presence of the regime, or the head of this regime still in power." U.N. peace envoy Staffan de Mistura has said the Geneva meetings would not last more than 10 days.

The negotiations are set to cover the formation of a new government, a fresh constitution and U.N.-monitored presidential and parliamentary elections within 18 months. Assad's fate has been one of the main stumbling blocks in previous rounds, with key ally Russia rejecting any suggestion he should go while opposition-backer the U.S. has called for him to step down. Analysts have cast doubt on whether the latest efforts will be any more successful. "Assad is stronger than ever and is going nowhere," said Joshua Landis, director of the Center for Middle East Studies at the University of Oklahoma, adding the talks' agenda "is not realistic." Muallem said the U.N. envoy had no right to "discuss presidential elections," saying the talks aim to form a unity government to appoint a committee to either write a new constitution or amend the existing one. "Then we will have a referendum for the Syrian people to decide on it," he said. The HNC has called for the creation of a transitional body with full executive powers, and Alloush said Muallem's comments "show that the regime is not serious about the political process." There have also been questions about how far any deal would be felt on Syria's battlefields, where myriad groups have been competing for territory. Russia had called on De Mistura to include Syrian Kurds in peace talks, but the envoy told Swiss newspaper Le Temps that while they would not take part, they should be given a chance to express their views.

Fighting has eased across Syria since a landmark cease-fire between Syria's regime and rebels, bar some militant groups, took effect two weeks ago. U.S. Secretary of State John Kerry said the truce had reduced violence by 80-90 percent since coming into force on Feb. 27, which he described as "very, very significant" news ahead of the talks. He said U.S. and Russian officials would meet in Geneva and Amman on Saturday to discuss opposition complaints of violations. "We believe that the start of talks this next week in Geneva presents a critical moment for bringing the political solution to the table that we've all been waiting for," he said after meeting top officials in Saudi Arabia. Both sides have accused the other of breaking the truce, and Alloush said there have been 350 violations since it began, which showed the regime was "not serious" about the ceasefire. Regime air raids killed seven civilians in rebel-held areas of second city Aleppo on Friday, the Syrian Observatory for Human Rights said.

As the Syrians mark the fifth anniversary of the anti-regime protests which have started peacefully, hundreds of thousands of people died while the war has changed both regional and international balances due to the involvement of Russia and Iran. In March of 2011, Syrians were emboldened enough to raise their voices against the dictatorship. However, the regime's response was not as peaceful as the protests, and the country was subsequently dragged into a deadly civil war after opposition groups took up arms against the government. The emergence of radical groups like DAESH and al-Nusra Front has also changed the color of the war so that the U.S. expanded its so-called war on terror to Syria. The war also caused an unprecedented migration crisis as millions of Syrians, fleeing from the war, are knocking the doors of Europe.