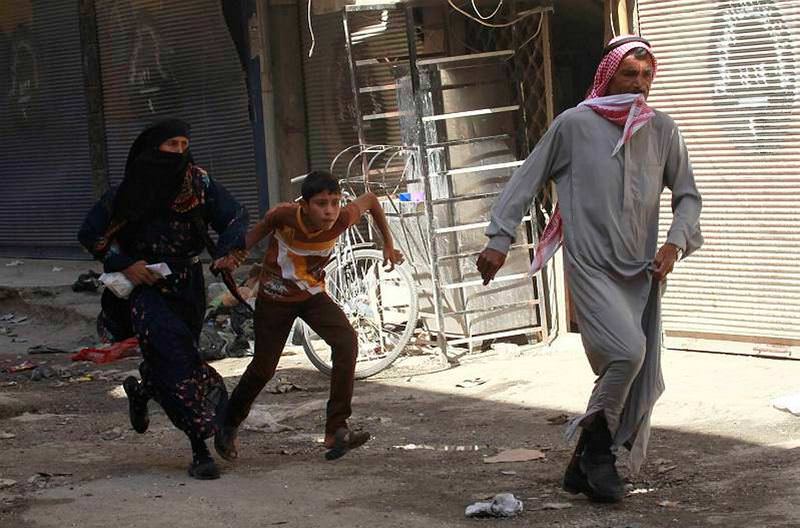 In this file photo, residents of Raqqa escape after an airstrike, conducted by the Syrian regime.
by Daily Sabah with Wires Mar 21, 2016 12:00 am

A series of Russian airstrikes on the DAESH's bastion of Raqqa killed at least 55 civilians, monitoring groups reported. Although Russia started withdrawing its military, attacks on DAESH-held areas continue

The death toll from Russian airstrikes on the DAESH-held city of Raqqa in the past 24 hours has climbed to at least 55, mostly civilians, Syrian opposition activists said Sunday. The extremist group has controlled the city in northern Syrian since 2013 and considers it the capital of its self-styled caliphate. It has recently become the focus of more intensified airstrikes.

Intensified airstrikes on Raqqa were ongoing Sunday. The Britain-based Syrian Observatory for Human Rights, which documents the conflict through activists on the ground, said 55 people have been killed, including 13 children and a pregnant woman, in what it said were Russian airstrikes that hit residential areas over the past 24 hours. The anti-DAESH activist group Raqqa is Being Slaughtered Silently also said the airstrikes were by Russian warplanes and put the number of deaths at 60. The DAESH-affiliated news agency Aamaq said 43 were killed and 60 wounded. It released a video that purports to show the "massacre committed by Russian aircraft in one of Raqqa's most congested streets." The video shows what appears to be dead babies as well as bombed out buildings, burning cars and other wreckage. The activist groups on Saturday said the air raids struck near the national hospital, a former army base and other neighborhoods.

Russia has been conducting air raids in Syria since Sept. 30. Moscow began drawing down its military presence in Syria over the past week after President Vladimir Putin ordered a partial pullout of Russian aircraft and forces in support of indirect peace talks in Geneva. On Thursday, Putin said Moscow would keep enough forces in Syria to continue the fight against DAESH, the al-Qaida-affiliated Nusra Front and other extremist organizations. DAESH is not included in the truce that was brokered by Russia and the U.S. and went into effect on Feb. 27, leading to a drop of violence in Syria. The air raids come at a time when DAESH has lost large swaths of territory in northern Syria, including in Raqqa province, in battles with the Syrian Democratic Forces. To the south, Syrian troops are on the offensive in an attempt to capture the ancient town of Palmyra, which has been under DAESH control since May. Opposition activists reported heavy airstrikes Sunday on the town that is home to some of the world's most precious archaeological sites. Several of those sites have already been damaged or destroyed by the extremists.

After months of losing ground in Iraq and Syria, DAESH is showing signs of wear and tear, and its opponents say they have seen an increase in desertions among the extremists. But the militants appear to be lashing back with more terrorist and chemical attacks. Under a stepped-up campaign of U.S.-led and Russian airstrikes, as well as ground assaults by multiple forces in each country, the militants are estimated to have lost about 40 percent of their territory in Iraq and more than 20 percent in Syria. At their highest point in the summer of 2014, the group had overrun nearly a third of each country, declaring a "caliphate" spanning from northwestern Syria to the outskirts of Baghdad.

The fifth-year-long Syrian civil war has caused the deaths of more than 200,000 people with at least 60,000 missing. The war has also displaced nearly 10 million people. About 13.6 million people, equivalent to the population of London, have been displaced by conflicts in Syria and Iraq, many without food or shelter, the U.N. refugee agency revealed. The 13.6 million include 7.2 million displaced within Syria – an increase from a long-held U.N. estimate of 6.5 million – as well as 3.3 million Syrian refugees abroad, 1.9 million displaced in Iraq and 190,000 who have left to seek safety. The vast majority of Syrian refugees have fled to Lebanon, Jordan, Iraq and Turkey. Western countries have been frequently criticized by aid agencies and the U.N. for not opening their borders to Syrian refugees, as the most developed countries have received the least number of refugees.