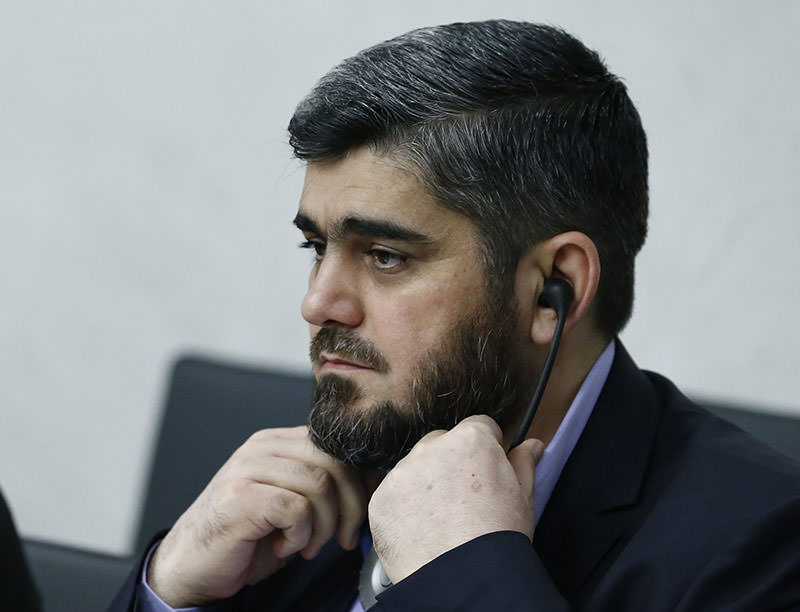 Mohamed Alloush of the Jaysh al Islam, and member of the delegation of the High Negotiations Committee attends meeting with UN mediator Mistura (not pictured) (EPA)
by Anadolu Agency Mar 21, 2016 12:00 am

Russian airstrikes killed only civilians especially in the Syrian cities of Palmyra and Raqqa, whereas Daesh terrorist organization's headquarters have not been touched, Mohamed Alloush, chief negotiator for the Syrian opposition, told Anadolu Agency (AA) in an exclusive interview with Anadolu Agency.

According to the chief negotiator, the last round of talks in Geneva "was hindered by a lack of humanitarian aid deliveries [in Syria] and stepped-up Russian bombardments [of opposition positions]." Since then, however, he added, "Russia has shown some flexibility and withdrawn some of its aircraft [from Syria]."

"But while Russian bombardments have stopped in some areas, they have continued in others," Alloush noted. "Those killed in the cities of Palmyra and Raqqa [by Russian airstrikes] are Syrian civilians, while Daesh's headquarters haven't been touched."

He went on: "Factions of the Free Syrian Army (FSA) have managed to liberate several villages in the Aleppo countryside from Daesh, which Russia and the international coalition weren't able to do. The Syrian people and various opposition factions -- including the FSA -- have been able to expel Daesh [from certain areas], while the international coalition and Russia have only hurt civilians."

"What's more, the regime uses hunger to subjugate the population," he said. "We therefore call on the international community to pressure Russia, because the reconciliation team is composed of Russian officers and because Russia plays a role in the zonal truces, which are based on the principle of reconciliation-for-food. This is a war crime, but the regime still does it."

Alloush also criticized the regime's decision to send Foreign Ministry officers to the talks in Geneva.

"That the regime sends Foreign Ministry personnel -- who don't have any authority to take decisions -- suggests that it doesn't want to find a solution; rather, it's just buying time to restore the balance of power which was changed by the Russian intervention."

He added: "If the regime really wanted a solution, it would send senior security officers."

Alloush went on to assert: "We participated in the current round of talks. It is now up to the UN. We won't stay here just to provide documents; we're here to get answers -- and these answers should come from the regime itself, not from a bunch of bureaucrats."

With regard to Russia's recent partial military withdrawal from Syria, the negotiator said: "Russian intervention [in Syria] was an act of aggression. It has led to dozens of massacres, the destruction of schools, medical centers and hospitals, and the displacement of tens of thousands of people."

He added: "Russia's recent partial withdrawal is attributable to the heavy cost [of intervention]. We believe it's a mere maneuver rather than a genuine withdrawal. A total withdrawal would be a very positive step."

Alloush went on to point out that the regime had continued to carry out acts of aggression in Syria despite an ongoing cessation-of-hostilities agreement.

"On Saturday, for example, the regime carried out several raids in different areas -- including Bala, Al-Marg, Harasta and Qantara in the countryside of Damascus -- while continuing to drop barrel bombs in Deraa and in other areas," he said.

"Regime forces remain mobilized on all fronts," he added. "They appear ready not just to break the ceasefire agreement, but to demolish it altogether."

As to whether the fragile truce will hold, Alloush said: "Every day, faction leaders on the ground reassess the situation. They retain the right to respond to each [ceasefire] violation firmly and forcefully; they are authorized to stop the regime from making any progress in strategic areas."

Alloush also spoke of the oppressive tactics upon which the Assad regime has long relied.

"The regime carries out various oppressive tactics against the Syrian people," he said. "It intervenes in all aspects of the people's lives: weddings, births? all need security approval."

"For example, if someone wants to grow a beard, he must first get a license from the Religious Endowments Ministry, along with permission from various security directorates," he added.

Last Wednesday, Bashar Jaafari, the regime's representative at the UN and a member of its negotiating team, said his condition for sitting down with Alloush was that the latter "apologize" and "shave his beard".

Alloush, who is also a leader of Syria's Jaysh al-Islam opposition group, responded to Jaafari's remarks by saying: "We came here [to Geneva] to defend the cause of the Syrian people and try to help the Syrians who have been detained and tortured [by the regime] and the Syrian refugees around the world who are drowning in the sea."

"The Syrians are our people, our children," he added. "We didn't come here to defend our beards."

Alloush pointed to the recent re-eruption of anti-regime street protests in several parts of Syria.

"Demonstrators' demands are greater than before; the Syrian people want the regime overthrown; they support our delegation's demands at these negotiations," he said.

"This delegation represents the Syrian revolution; we don't want stop-gap solutions. We're not negotiating for this ministerial portfolio or that -- give me this one and you take that one," Alloush added.

"We're confronting a criminal gang that for 50 years has monopolized the Syrian state, government and institutions," he said.

Staffan de Mistura, the UN's special envoy for the Syria crisis, the current round of negotiations -- slated to wrap up on March 24 -- will be followed by a recess period of a week or ten days before another two-week round of talks kicks off.