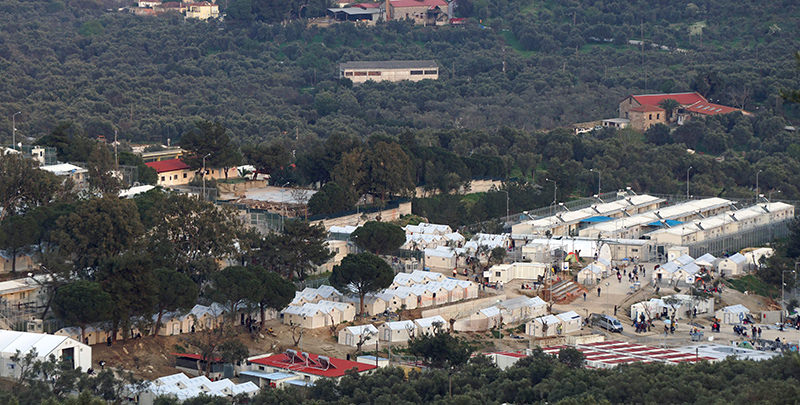 As part of the first stage of the EU-Turkey deal that aims to stem the flow of refugees to Greece, Turkish monitors have been deployed on two Greek islands to supervise the implementation process

​Monitors from Turkey have arrived on the Greek islands of Lesbos and Chios to help supervise an agreement aimed at limiting the number of refugees and migrants traveling to the European Union. The monitors arrived on Monday as Greek authorities scrambled to implement the landmark deal reached last week between EU and Turkish leaders that includes faster refugee relocations to EU countries as well as collective deportations of future migrants from Greek islands to Turkey. Government figures released on Monday said the number of stranded migrants in Greece exceeded 50,000 with no significant change in the number of daily arrivals. Under the terms of the deal, migrants arriving on Greek islands from Sunday onward will no longer be allowed to travel to the Greek mainland. Athens was due to deport refugees who reached Greek shores on Sunday, but Greek Prime Minister Alexis Tsipiras told ministers the country still needs more time to implement the deal. Under the agreement, for every migrant Greece sends back to Turkey, the EU will resettle one Syrian from Turkey's refugee camps. "The agreement to send back new arrivals on the islands should, according to the text, enter into force on March 20. But a plan like this cannot be put in place in only 24 hours," said Giorgos Kyritsis, a spokesman for the Greek government said on Saturday.

Turkey agreed to take back all migrants and refugees who cross into Greece via its territories illegally by sea starting from March 20. Refugees will be transferred to Turkey once they are registered and their asylum requests are assessed by EU authorities. The country struck the deal after tense negotiations with leaders of EU states looking to fend off the increasing influx of refugees, especially those from war-torn Syria. The continental body agreed to take in thousands of Syrian refugees from Turkey with direct flights in return, and pledged to fund services for refugees in Turkey, whose number amount to more than 2.7 million, such as education. Turkey, which has strove to join the EU for decades, is also being offered visa-free travel for its citizens as well as promises that new chapters in Turkey's EU membership process will be opened.

It is apparently a tentative deal at best with many in Europe voicing reservations about the benefits of the agreement, while Ankara says the refugee crisis cannot be solved without an end to the conflict in Syria. The government is also urging the international community to be more proactive to restore peace in its southern neighbor. Until then, refugees may remain a common sight on the long stretch of Turkey's Aegean coast a few sea miles away from small Greek islands dotting the sea, the easiest yet most dangerous route for them. At least 362 migrants died in the Eastern Mediterranean region including Aegean Sea in the first three months of 2016, according to the International Organization for Migration (IOM). Deaths are linked to bad weather that is prevalent despite the onset of spring and faulty dinghies overcrowded with migrants.