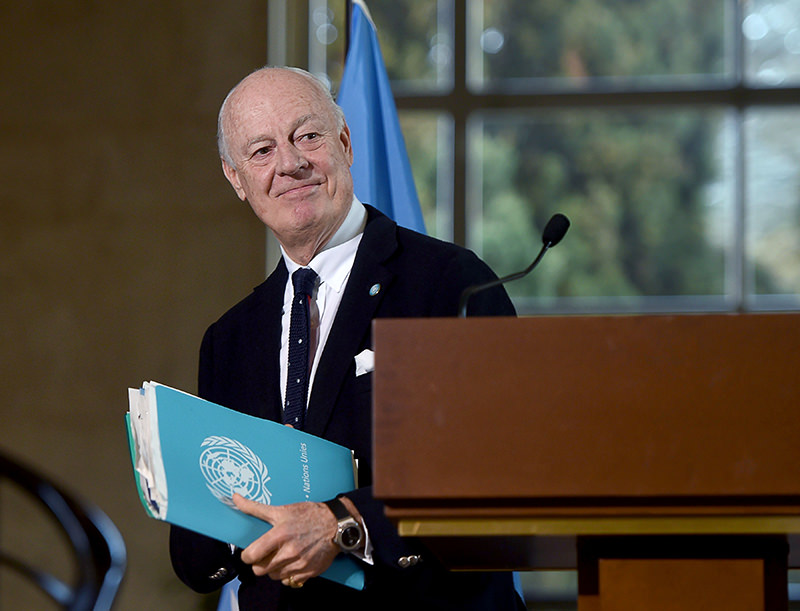 UN Syria envoy Staffan de Mistura leaves a press conference following a new round of negotiations of peace talks on Syria. (AFP Photo)
by Daily Sabah with Reuters Mar 21, 2016 12:00 am

The U.N. Syria special envoy said on Monday he was concerned by the slow progress of talks warning that without dialogue beginning on a political transition it would be difficult to sustain the cessation of hostilities and aid deliveries.

Speaking after talks with the head of the Syrian government delegation Bashar Ja'afari, Staffan de Mistura said that Ja'afari had told him it was too early to discuss political transition.

"He said it was premature at the moment to talk about it. Premature means imminent as far as we (U.N.) is concerned," de Mistura told reporters.

"Everyone more or less agrees, the cessation of hostilities is still holding and frankly largely. The same ... more or less for the movement on humanitarian aid. But neither of them can be sustained if we don't get progress on the political transition."

The Syrian opposition also accused the Syria regime delegation at peace talks in Geneva of wasting time by refusing to discuss the future of Bashar Assad.

"It is not possible to wait like this, while the regime delegation wastes time without achieving anything," said Salim al-Muslat, spokesman for the opposition High Negotiations Committee.

"We want to see a result as soon as possible and we hope that there will be efforts and pressures to mobilise this process," Muslat told al-Arabiya al-Hadath news channel.