Death toll rises to 33, including women and children, as regime hits east of Damascus 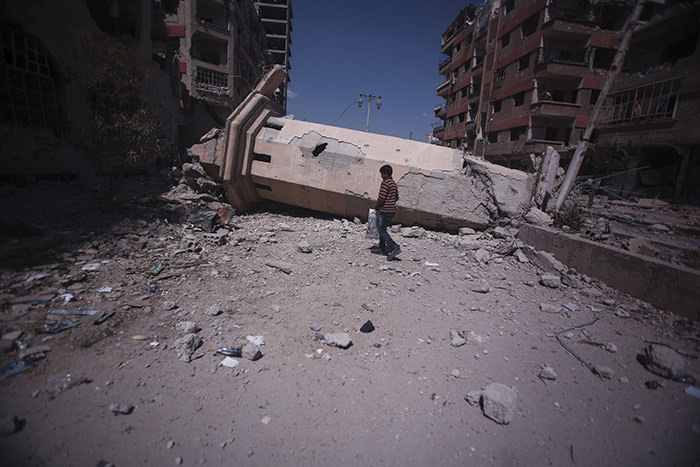 The death toll from airstrikes in the Deir al-Asafir district southeast of Damascus has risen to 33, mostly women and children, the Syrian Observatory for Human Rights monitoring group said.

The strikes on Thursday, which the human rights group said were launched by Syrian aircraft, came despite a month-long "cessation of hostilities" in Syria between government forces and their opponents, excluding DAESH and the al-Qaida-linked Nusra Front. The United States State Department said it was appalled by the reported airstrikes. "We condemn in the strongest terms any such attacks directed at civilians," spokesman John Kirby said.

Parts of the Eastern Ghouta region east of Damascus, where Deir al-Asafir is situated, have been outside the control of the Bashar Assad regime since almost the start of the uprising, which erupted five years ago and descended into civil war. The area is controlled by different factions, including rebel forces covered by the truce as well as Nusra Front.

In an update late on Thursday, the observatory said 12 children, nine women, a teacher and an emergency response worker were among the dead in Deir al-Asafir. The "White Helmet" volunteer rescue organization said emergency worker Walid Ghourani was killed when one of its ambulances was hit.

It released video footage of an ambulance arriving at Deir al-Asafir and a white-helmeted rescue worker, carrying a stretcher over his shoulder, rushing through a rubble-strewn alleyway toward what appeared to be the site of an explosion. It also published pictures it said showed the destruction of the White Helmet base in Deir al-Asafir, including a fuel depot. Fire hoses and gas canisters could be seen among the mounds of collapsed concrete.

The observatory said Syrian government forces have been trying to surround Deir al-Asafir, which it said is still home to 2,700 families.

The Syrian civil war has now entered its fifth year and has caused the deaths of more than 250,000 people with at least 60,000 missing. The war has also displaced nearly 10 million people. While international and regional powers continue endless discussions, it has been reported that the Syrian regime continues to use chemical weapons.