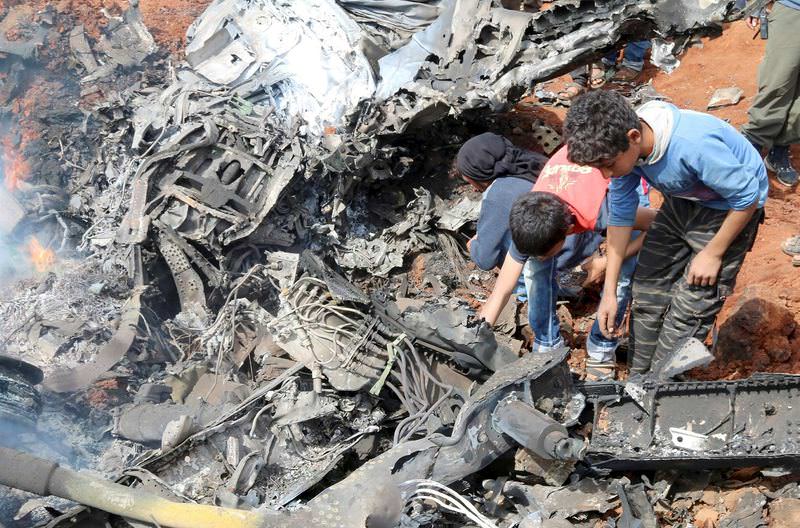 by Daily Sabah with Wires Apr 06, 2016 12:00 am
Rebels shot down a Syrian warplane and captured its pilot on Tuesday in an area south of Aleppo where insurgents are battling the Syrian army and allied militias, a monitoring group said. Syria's military confirmed that a plane on a reconnaissance mission had been shot down and said it was hit by a surface-to-air missile. The pilot had bailed out and efforts were underway to rescue him, it said. The Syrian Observatory for Human Rights said fighters from al-Qaida's Nusra Front group captured the pilot and took him to one of their headquarters in the area. There was no immediate rebel comment on the use of an anti-aircraft missile. The Observatory said a plume of smoke was seen as the plane caught fire before it fell in the Talat al-Iss highland, where al Qaeda-affiliated rebels have come under heavy bombardment by Syrian and Russian planes since they captured the area this week. Videos on social media also showed footage of an aircraft and pictures of the wreckage of a burnt plane surrounded by rebels. An amateur video posted online showed a man who appeared to be a pilot as he was being captured by militants in the area. "Shame on you, you filthy pig," some of the fighters said as they surrounded the man. A fighter could be also heard shouting "take away his gun."

In response to the claims that the plane belonged to Russia, Russia's Defense Ministry said on Tuesday its war planes did not carry out any tasks near the Syrian city of Aleppo on Tuesday, RIA news agency reported. Aerial supremacy has been a major advantage for the Syrian army that has been battling insurgents seeking to overthrow Bashar Assad. Foreign-backed rebels have long demanded anti-aircraft weapons to offset the impact of devastating aerial raids by Syrian forces and, since September, also by Russian planes. But their backers have been wary of delivering weapons that could fall into the hands of hardline groups.

Meanwhile, U.N. Special Envoy Staffan de Mistura, the mediator of Syrian peace talks, is travelling to Moscow on Tuesday to discuss preparations for the next round of talks with Russian Foreign Minister Sergei Lavrov, de Mistura's office said. Russia and the United States are the main co-sponsors of the peace talks, which are expected to resume with the opposition delegation on April 11, a U.N. spokesman said on Tuesday, missing de Mistura's "target date" of April 9. Syria's government delegation is expected to arrive on April 14. The Moscow meeting was arranged at de Mistura's initiative, his office said.
RELATED TOPICS