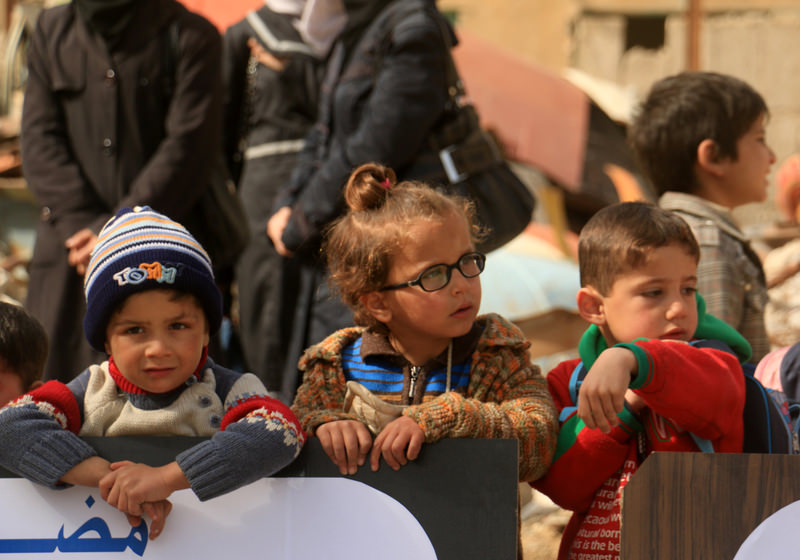 by Associated Press Apr 07, 2016 12:00 am
The United States accused the Syrian regime on Tuesday of preventing humanitarian aid deliveries to all besieged and hard-to-reach areas of the country as required in U.N. resolutions, even as a cease-fire that was meant to allow such deliveries continues.

U.S. Ambassador Samantha Power told reporters after a closed-door emergency briefing to the Security Council by the U.N. humanitarian chief that less food aid reached millions of people in besieged and hard-to-reach areas in March than in February, when the cease-fire began.

The U.N.'s humanitarian office said 21 percent of the nearly 500,000 people in besieged areas were reached in March, down from 25 percent in February. But spokeswoman Amanda Pitt said 83,000 of the 4.1 million people in hard-to-reach areas got aid in March, more than the 53,000 in February.

He said the U.N. has received reports that severe food shortages are forcing some people in Daraya to eat grass. Power said Daraya hasn't received "one crumb of U.N. food" since 2012.

The U.S. ambassador also held up a photo of a skeletal boy in Madaya, which recently received several aid deliveries. She said O'Brien described Tuesday how the U.N. tried to evacuate him for medical treatment but the Syrian regime refused and the boy, who was around 14 years old, died on Monday.

O'Brien said on March 30 that desperately needed aid has reached only 30 percent of Syrians living in besieged areas and less than 10 percent in hard-to-reach areas this year, even with the cease-fire. He said many of the 4.6 million Syrians in need in these areas can't be reached because of insecurity and obstruction by combatants.

Pitt said the U.N. has requested access to 11 priority areas in April, but the government has so far only approved six locations, leaving out areas including Daraya, Duma and East Harasta. She said the World Food Program is trying to air drop food to 200,000 people besieged in parts of Deir el-Zour city.

Power said the United States and other Security Council members are appealing to those with influence on the Syrian regime to ensure that every area is reached.

"It's going to take a very, very, very large push to change the trajectory for people who are this malnourished," she said.

Her appeal was clearly aimed at Russia, Syria's closest ally.

Russia's deputy U.N. ambassador Vladimir Safronkov told reporters that under the cessation of hostilities agreement a humanitarian working group was created in Geneva, "and this is where we are working" on implementation of U.N. resolutions adopted in December and February calling for humanitarian access to all besieged and hard-to-reach areas.

"It's a better way to work together," Safronkov said.

The blockade of Madaya, near the border with Lebanon some 50 kilometers east of Beirut and 20 kilometers northwest of Damascus, had become a focal issue for Syrian opposition early January.

Many people died of starvation in Madaya previously, the Syrian Observatory for Human Rights had said. Opposition activists also said the number of dead was in the dozens.
Last Update: Apr 07, 2016 1:02 am
RELATED TOPICS