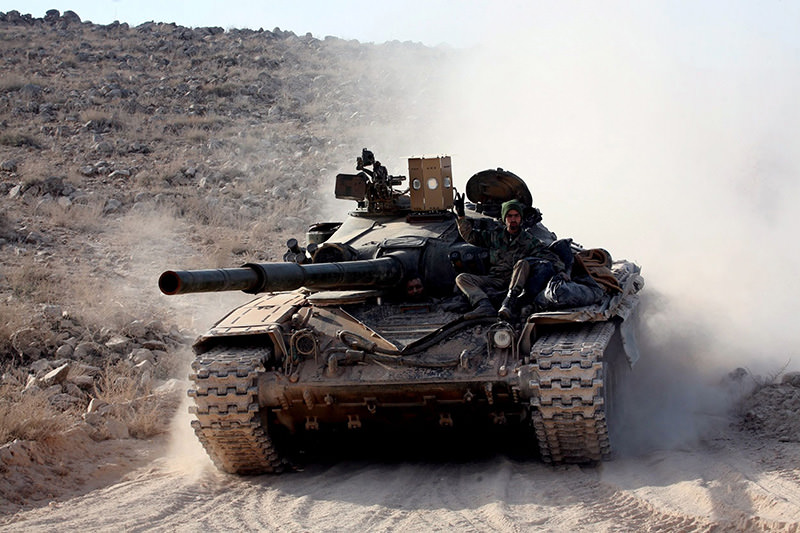 The Russian air force and Syrian regime forces are preparing a joint operation to take Aleppo from rebels, the Syrian prime minister was quoted saying on Sunday, and an opposition official said a ceasefire was on the verge of collapse.

With a U.N. envoy due in Damascus to try to advance struggling diplomatic efforts, the "cessation of hostilities agreement" brokered by Russia and the United States came under new strain as government and rebel forces fought near Aleppo.

The ceasefire came into effect in February with the aim of paving the way for a resumption of talks to end the five-year-long war. But it has been widely violated and each side has blamed the other for breaches.

An upsurge in fighting south of Aleppo this month, in which rebel groups have gained some ground, marks the most significant challenge yet to the deal.

Diplomacy has meanwhile made little progress with no compromise over the future of President Bashar al-Assad, his position strengthened by Iranian and Russian military support. Talks are due to resume in Geneva this week.

A top Iranian official, in comments to Iran TV, rejected what he described as a U.S. request for Tehran's help to make Assad leave power, saying he should serve out his term and be allowed to run in a presidential election "as any Syrian".

Syrian Prime Minister Wael al-Halaki told a delegation of visiting Russian lawmakers of preparations to "liberate" Aleppo, Syria's biggest city and commercial hub before the conflict that erupted in 2011 and now divided between government and opposition.

"We, together with our Russian partners, are preparing for an operation to liberate Aleppo and to block all illegal armed groups which have not joined or have broken the ceasefire deal," he was quoted as saying by TASS news agency.

Dmitry Sablin, a member of Russia's upper house of parliament and a member of the delegation, told RIA news agency "Russian aviation will help the Syrian army's ground offensive operation".

The government and its allies have mounted major operations against insurgents to the north and south of Aleppo in the six months since Russia began air strikes in support of Assad and cut the most direct supply route to Turkey earlier this year. But rebels still hold territory in and around the city, including its western approaches.

Syrian Information Minister Omran al-Zoubi told al-Mayadeen TV the Aleppo operation would be "large-scale and continuous", saying there was no truce in the area because the al Qaeda-linked Nusra Front and groups linked to it were operating there.

The deployment of the Russian air force helped tip the war Assad's way as it bombed rebels supported by his enemies including Saudi Arabia, Turkey and the United States. President Vladimir Putin last month withdrew some of the Russian forces, but maintained an air base in Latakia, and kept up strikes on the Daesh group.

Neither the al Qaeda-linked Nusra Front or Islamic State are included in the partial ceasefire.

Rebels have reported the resumption of heavy Russian air strikes south of Aleppo, an important theatre where Iranian forces and Lebanon's Hezbollah are fighting in support of the army and the Nusra Front is deployed in close proximity to rebels.

"At night the Russian planes enter the battlefield and start bombing us heavily," said Abu Omar, a rebel from a coalition of hardline rebel groups called Jaish al Fateh, referring to an area near the strategic town of Khan Touman which the rebels are trying to regain to stop the army cutting the main Aleppo-Damascus highway.

The Syrian Observatory for Human Rights said a total of 35 combatants had been killed on both sides in a 24 hour period in the area, where fighting has been raging for some 10 days.

TRUCE ABOUT TO COLLAPSE

A member of the main opposition council said the last 10 days had "witnessed a serious deterioration, to the point where the ceasefire is about to collapse". Bassma Kodmani of the High Negotiations Committee also told Journal du Dimanche that a U.S.-Russian ceasefire monitoring mission was "powerless".

The war has killed more than 250,000 people, created the world's worst refugee crisis, and allowed for the rise of Daesh.

Rami Abdulrahman, director of the Syrian Observatory for Human Rights, said "in Aleppo there is a real collapse of the truce".

The army says groups that had agreed to the cessation of hostilities had taken part in Nusra Front attacks on government-held positions south of Aleppo. Free Syrian Army groups meanwhile blame the fighting on government violations.

"The air strikes are now roughly back to what they were," said Mohamed Rasheed, head of the media office with the Jaysh al-Nasr rebel group. A Syrian military source said: "The battles are raging because ... armed groups that were part of the (truce) joined Nusra in the attack."

The Observatory also reported fighting on Sunday between government and rebel forces near the opposition-held town of Douma outside Damascus, and said government helicopters had dropped barrel bombs on rebel-held areas north of Homs.

Barrel bombs are oil drums filled with explosives. While the government denies dropping them, their use has been widely recorded, including by a U.N. Commission of Inquiry on Syria.

U.N. envoy Staffan de Mistura is due to arrive in Damascus on Sunday evening, and is expected to meet Syrian officials on Monday. He said last week he would go to Damascus and Tehran to sound out their position on a political transition before beginning a new round of peace talks on Wednesday.

De Mistura has said the next round of talks needs to "be quite concrete in the direction of a political process leading to a real beginning of a political transition".

"We should ask them: "What does this have to do with you? Shouldn't the Syrian people decide?'"

"From Iran's point of view Bashar Assad and his government should remain as a legal government and legal president until the end of his term. And Bashar Assad shall be able to take part in a presidential election as any Syrian citizen. And their precondition that Bashar Assad should go is a red line for us."

In a sign of Assad's confidence, the Syrian regime plans to hold parliamentary elections on Wednesday. Salim al-Muslat, opposition spokesman, said the vote was illegitimate.

"I don't know how they can really announce an election in Syria. In Idlib or in Aleppo or in Deir al-Zor or in Homs, can people go there and vote?" he said.