Areas controlled by Syria's Assad hold elections amid criticism from opposition, the West 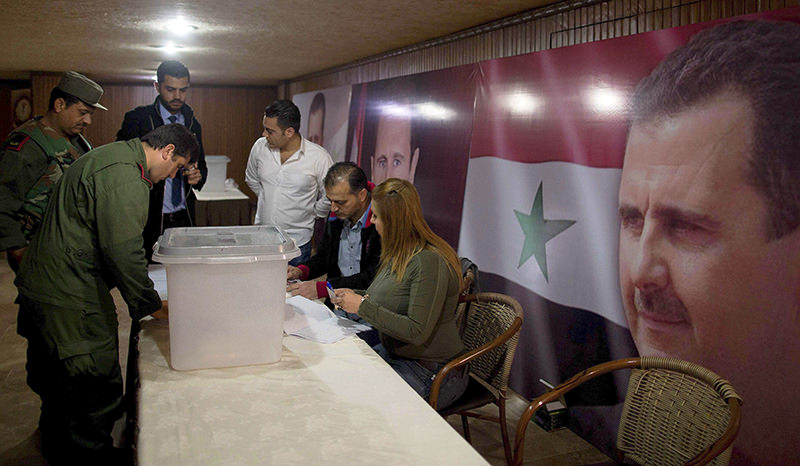 Syrian policemen cast their votes at a polling station during the parliamentary election in Damascus, Syria, Wednesday, April 13, 2016 (AP Photo)
by Compiled from Wire Services Apr 13, 2016 12:00 am

Polls opened in areas of war-torn Syria controlled by the Assad Regime on Wednesday, for a parliamentary vote dismissed by regime opponents as illegitimate.

Polling stations opened at 7:00 am (0400 GMT) in areas under Assad control -- about a third of the country's territory where about 60 percent of the population lives -- and will remain open for 12 hours unless the electoral commission decides to extend the deadline "because of crowds."

The vote coincides with the beginning of a second round of UN-brokered peace talks in Geneva aimed at ending the five-year conflict, with the future of Assad's rule a key sticking point.

The opposition says it contributes to an unfavorable climate for negotiations amid fierce fighting that threatens an increasingly tenuous cease-fire engineered by the United States and Russia.

Western leaders and members of the opposition have denounced the process as a sham and a provocation that undermines the Geneva peace talks.

Syria's parliamentary elections on Wednesday are a "sham" organized by "an oppressive regime," France's foreign ministry said, adding that viable elections could only take place after a political transition and new constitution.

"France denounces this shame of an election organized by the regime," Foreign ministry spokesman Romain Nadal said in a daily briefing on Wednesday. "They are being held without campaigning, under the auspices of an oppressive regime and without international observation."

Nadal said only elections as part of a UN resolution that paves the way for a transition in the country would be valid.

The election is expected to see his Baath party maintain control over parliament, although several parties are participating.

The controversial polls come at a tense time as violence has surged in recent days, threatening a fragile six-week ceasefire, and as UN Syria envoy Staffan de Mistura tries again to reach a consensus on ending the war in Geneva.

The talks are aimed at agreeing a roadmap to peace, including forming a transitional government followed by general elections, to end a conflict that has killed more than 270,000 people and displaced half of the country's population.

The vote is the second ballot since the beginning of the war in 2011, and 11,341 candidates initially submitted papers to run for the 250 seats in parliament.

Some 3,500 candidates remain in the race, after the rest withdrew "saying they had no chance of winning", Hisham al-Shaar, the head of the Supreme Judicial Elections Committee, told reporters.

Walls across the capital Damascus were covered with candidate posters, and from the top of one of the city's tallest buildings a banner of the Baath party -- which has controlled the country for more than half a century -- proclaimed: "The elections of resistance."