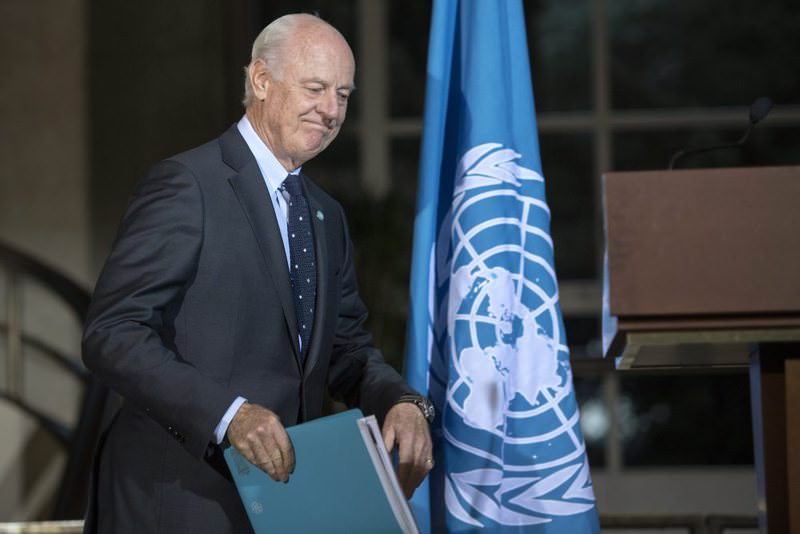 by Associated Press Apr 15, 2016 12:00 am
Syrian regime troops exchanged fire with opposition in the contested northern city of Aleppo on Thursday in a renewed bout of fighting that could further mar peace talks underway in Geneva.

Government warplanes, helicopter gunships and artillery were bombarding rebel-held parts of the city and its suburbs, according to the Britain-based Syrian Observatory for Human Rights and Aleppo-based activist Bahaa al-Halaby.

The fighting came a day after Syrians in regime-held parts of the country voted for a new parliament balloting that the opposition has dismissed as a sham and that could further undermine the peace talks. Those negotiations resumed Wednesday in Geneva, with U.N. envoy Staffan de Mistura meeting Syrian opposition representatives. The regime is expected to join the talks on Friday, a delay that was explained by the elections.

Aleppo has seen sporadic clashes despite a U.S.-Russia-engineered truce that went into effect in late February. Regime forces and their allies have opposition-held parts of Aleppo almost surrounded from all sides, except for a corridor from the northwestern edge of the city.

"Areas close to the front lines are tense," said al-Halaby, the activist, speaking via Skype as explosions were heard in the background. He said several shells are falling every minute on the city and its suburbs.

The Observatory and the Local Coordination Committees, another opposition monitoring group, reported violence in other parts of the country, including the central province of Homs and the northwestern region of Idlib.

Meanwhile, the U.S.-led coalition struck areas controlled by the DAESH near Syria's border with Turkey. DAESH and al-Qaida's Syria branch known as Nusra Front are not part of the cease-fire in Syria.

Coalition jets struck DAESH militants in the villages of Souran, Hawar Kilis and Kafra.. The reports said smoke rose from the strikes and that sounds of explosion and gunfire were heard from across the border.

The Observatory also reported the airstrikes, saying they came amid clashes between IS fighters and rival groups in the area. It said IS fighters captured on Thursday the village of Hawar Kilis and the area around it.

The villages in northern Syria lie across the border from the Turkish town of Kilis, which has been the scene of near-daily rockets and shelling from DAESH-controlled territory in Syria. One person was killed and several people were wounded from such rocket fire on Wednesday.

Also Thursday, Russian President Vladimir Putin one Bashar al-Assad's staunchest allies said Moscow has shored up the Syrian regime to the point where it can conduct offensive operations largely on its own following a Russian military drawdown.

As an illustration of the Syrian regime's success, Putin, who spoke in a marathon call-in TV show, said that after Russia withdrew some warplanes from Syria, the Syrian army was able to recapture the ancient town of Palmyra from the DAESH militants. Putin also expressed hope the truce will help Syrian peace talks in Geneva and pave the way for a new constitution and an early election.
RELATED TOPICS