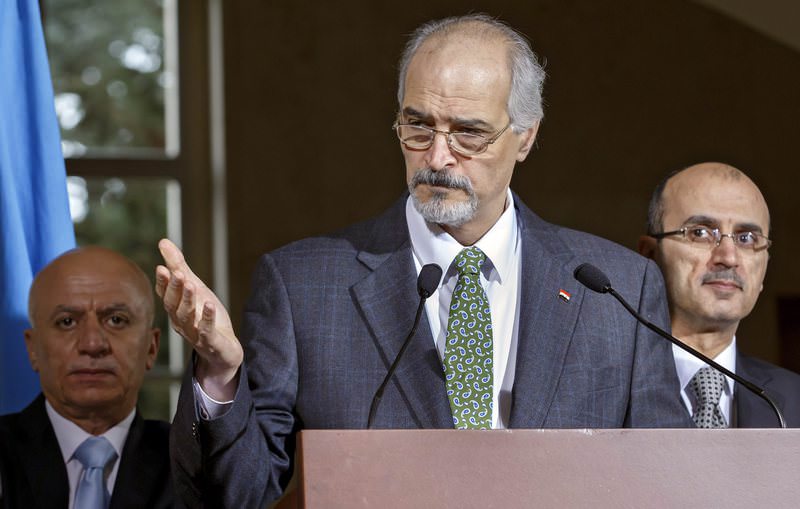 The delegation of Bashar al-Assad regime involved in peace talks in Geneva has proposed amendments to the UN document outlining steps to achieve an elusive political solution in the war-ravaged Syria.

The regime delegation leader and its envoy to the U.N. Bashar Ja'afari said he had "constructive and fruitful" discussions with Special Envoy Staffan de Mistura and said his delegation proposed "amendments" to the de Mistura's blueprint for negotiations.

Ja'afari's brief comments to reporters suggested the government is still focusing on the basic principles toward a political solution in Syria, and not yet willing to consider what de Mistura calls the "mother of all issues" — political transition away from Assad's rule.

De Mistura met with delegates from the High Negotiations Committee, an umbrella opposition coalition backed by the U.S., Saudi Arabia, and other Western powers, later in the day.

The committee said it was distrustful of the government's intentions.

HNC representative Asaad al-Zoubi blasted the government for "sending a strong message that it doesn't want a political solution but it's seeking a military solution that will bring destruction to the whole country."

Al-Zoabi said the Syrian regime had allegedly forced the displacement of more than 30,000 civilians from Aleppo towards Turkish borders.

He called for pressure on the regime to stop it from violating the cessation-of-hostilities agreement in Syria.

"The base of this problem is Assad and his ruling group and a transitional governing body will not include Assad and ruling group," he added.

The opposition also spoke with de Mistura about the release of all detainees in Syria, he said.

In March, at the end of last round of talks, de Mistura handed a document to the Syrian regime and opposition in Geneva, outlining 12 basic principles for achieving a political solution to the Syria crisis. He said back then that neither the regime delegation nor the opposition delegation had rejected this document.

No official meetings of the intra-Syrian talks are scheduled to take place over this weekend in Geneva, which are planned to resume Monday.

The latest round of peace talks to resolve the ongoing Syria conflict began in Geneva Wednesday, with the UN envoy still unable to give a date for a face-to-face meeting between the warring opposition and regime delegations.

On Wednesday, de Mistura had met the opposition delegation.