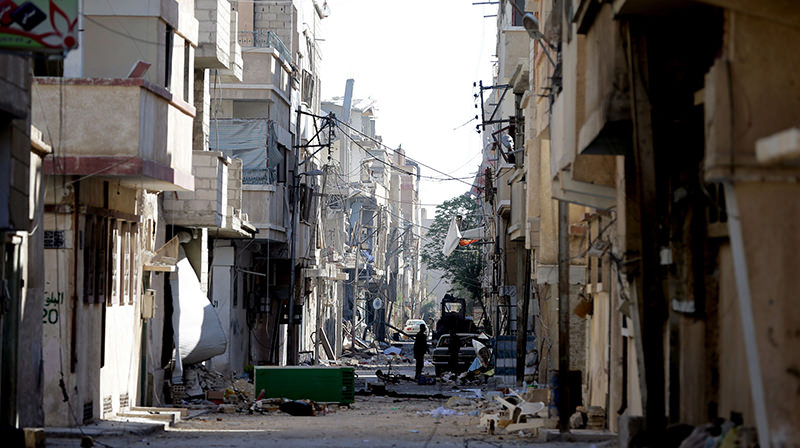 The head of a Syrian rescue organization was denied entry to the U.S. where he was to receive an award for humanitarian relief efforts in the war-torn country, American media reported.

Raed Saleh, who chairs the Syria Civil Defense, arrived in the U.S. on Tuesday to be awarded the 2016 Humanitarian Award by InterAction, an umbrella organization for international aid agencies.

Saleh's organization has rescued more than 40,000 civilians from the rubble of war.

Upon arrival Monday at Dulles International Airport in Washington DC, Saleh was informed that his visa had been canceled and he was denied entrance, according to U.S. media.

Saleh's visa was valid through September and he also reportedly had a letter from the U.S. Agency for International Development to facilitate his entry with U.S. customs.

"I am shocked and saddened to learn that Raed would be turned away by U.S. officials on the eve of being recognized by his peers in the international humanitarian community for his heroic work in Syria to help bring life-saving assistance to communities under fire in Syria," InterAction CEO Sam Worthington said in a statement.

"If the U.S. government won't allow Raed to be honored in person by the humanitarian community in Washington then InterAction leaders will travel to Raed, on the border of Syria, to ensure his work is appropriately and personally acknowledged," he added.

It is not yet clear whether Saleh's name was on a security list collected by interagency intelligence and checked against terror suspects but a State Department spokesman said the U.S. government's vetting system is screened against updated available information.

"While we can't confirm any possible specific actions in this case, we do have the ability to immediately coordinate with our interagency partners when new information becomes available," he added.

Saleh was reportedly deported to Turkey on the next flight to Istanbul where he originally departed.

He once sold electronics but became a search-and-rescue volunteer after the Syrian civil war began in 2011.

Saleh had previously visited the U.S. and attended the UN General Assembly's annual meeting in September 2014.

He also briefed the UN Security Council last June about the Assad regime's use of barrel bombs.