US split deepens over Putin's intentions in Syrian civil war 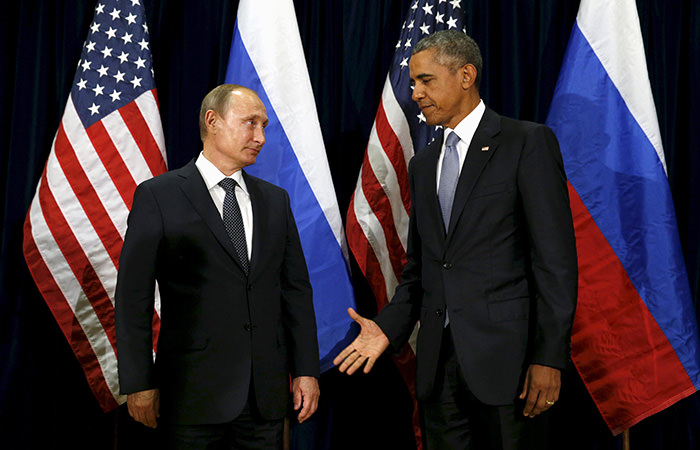 Reports say Russia has been repositioning artillery in northern Syria to bolster Assad, prompting concerns as the truce breaks down and peace talks are in meltdown

Russia's latest military moves in Syria have sharpened divisions within the U.S. administration over whether Russian President Vladimir Putin genuinely backs a U.N.-led initiative to end the civil war or is using the negotiations to mask renewed military support for Syria's Bashar Assad.

Russia has repositioned artillery near the disputed city of Aleppo, several U.S. officials told Reuters. Despite withdrawing some fixed-wing aircraft in March, Russia has also bolstered its forces in Syria with advanced helicopter gunships, and renewed airstrikes against moderate opposition groups, U.S. officials speaking on condition of anonymity said.

A Pentagon spokesman, Captain Jeff Davis, said the Pentagon has concerns about Russian activities in support of the Syrian regime, but declined to get into specifics.

"We've been concerned about reports of Russia moving materiel into Syria," Ben Rhodes, deputy national security adviser to U.S. President Barack Obama, said at a briefing earlier in the day in Riyadh where Obama was at a summit with Gulf leaders. "We think it would be negative for Russia to move additional military equipment or personnel into Syria. We believe that our efforts are best focused on supporting the diplomatic process," Rhodes added.

The Syrian opposition has accused the Assad regime of violating a cessation of hostilities agreement crafted in Geneva in February, to capture Aleppo, which is already divided between the regime and opposition forces.

The White House declined to comment on any internal debate on Syria or Putin's intentions. The current debate on how to respond to Russia's military moves partly reflects a difference of opinion in Washington over whether Putin has been sincere in his backing for the U.N. peace process which is now struggling for survival.

Some U.S. officials and experts think Putin has never been sincere about diplomacy, and that Obama and U.S. Secretary of State John Kerry were naive to believe Russian statements of support.

Putin remains wedded to keeping Assad in power and ensuring that Russia retains a naval port on the Mediterranean coast and an airfield in northern Syria, the only major military bases it has outside the former Soviet Union, they said.

While U.S. officials gave conflicting assessments on whether Russia had sent additional artillery to Syria, the Obama administration on Thursday openly expressed concern about reports that Russia has shipped more materiel into the country. The Pentagon has declined to speculate on Russian motives.

"I don't know what their intentions are. What I do know is that we have seen regime forces, with some Russian support as well, begin to mass and concentrate combat power around Aleppo," U.S. Army Colonel Steve Warren, the Baghdad-based spokesman for the U.S.-led coalition fighting DAESH, said on Wednesday. "So this is something that we're concerned about and something we're keeping an eye on."

Since last September, ongoing Russian airstrikes have forced more than 500,000 Syrians to flee their homes in the war-torn country, with many seeking shelter in Turkey or other neighboring states. Since the truce went into effect, the Assad regime, which along with Russia is also supported by Lebanon's Hezbollah, has also continued to carry out attacks, both from the air and on the ground. These have occurred in the Homs, Aleppo, Hama and Damascus provinces, as well as the Turkmen Mountain region in the province of Latakia.

Last month, Mohamed Alloush, chief negotiator for the Syrian opposition, told Anadolu Agency (AA) that Russian airstrikes killed only civilians, especially in the cities of Palmyra and Raqqa, whereas DAESH headquarters have not been touched.

World and regional powers sponsor the fragile cessation of hostilities that went into effect on Feb. 27, but has been left in tatters by fighting in several hotspots.