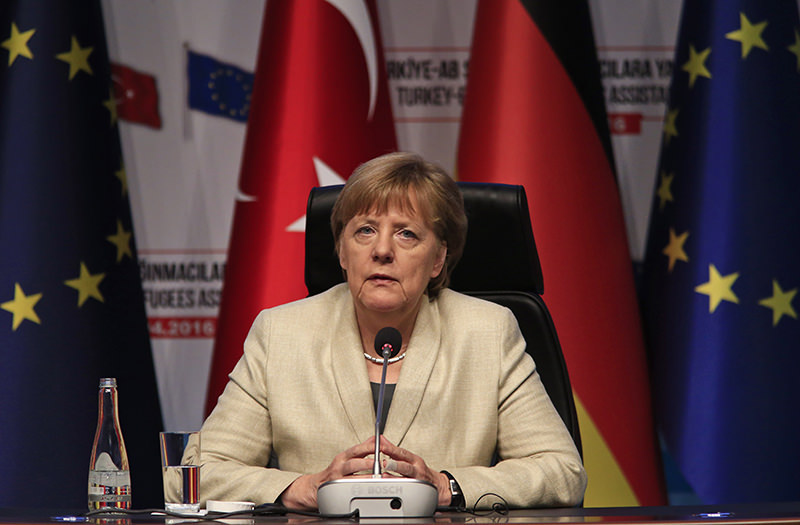 German Chancellor Merkel is seeking the establishment of safe zones in northern Syria, a proposal Ankara has long advocated, protecting civilians fleeing the civil war. However, some say her statement comes too late

German Chancellor Angela Merkel said on Saturday she wants to establish safe zones in northern Syria near the Turkish border to resettle refugees.

"I have ... again demanded that we have zones where the ceasefire is particularly enforced and where a significant level of security can be guaranteed," Merkel said in southeastern Gaziantep province at a joint news conference with Prime Minister Ahmet Davutoğlu, European Council President Donald Tusk and European Commission Vice President Frans Timmermans.

"We saw that Syrians have been embraced [here] as a society," she said. Turkey is the country that has accepted the highest number of refugees. The EU needs to take responsibility as well."

She added that 120,000 refugee children live in Gaziantep and that all are expected to go to school thanks to EU funds.

Along with praise for taking in Syrian refugees, which has reached nearly 3 million, Turkey has long advocated the establishment of a safe zone for refugees across its southern border between Jarablous on the western bank of the Euphrates River and Azaz after DAESH is removed from the area to protect displaced civilians without bringing them over the border into the country.

Merkel made similar statements in February, saying an area in Syria where no party to the conflict launches aerial attacks would be helpful for a solution.

"We can't negotiate with the terrorists of DAESH, but if we were able to reach an agreement between anti- and pro-Assad forces on a kind of no-fly zone, in the sense of a sanctuary for the many refugees, then this would save many lives and aid the political process about Syria's future," she said.

Enes Bayraklı, a foreign affairs specialist at the Political, Economic and Social Research Foundation (SETA), said Merkel's statement does not make sense unless a tangible step is taken for the proposal.

"It can be only regarded as political support for Turkey. However, the thing that is necessary to realize such a project is military power, and rather than Germany, the U.S.'s attitude is much more significant."

He also said that this statement was merely made due to Merkel's need for Turkey concerning the refugee issue. "It is support that has come too late."