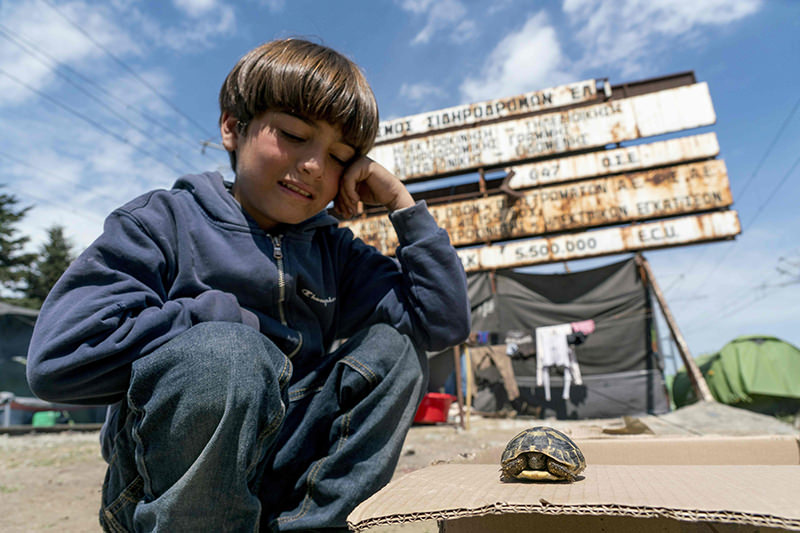 A child refugee plays with a tortoise at a makeshift camp for migrants and refugees at the Greek-Macedonian border near the village of Idomeni on April 23, 2016. (AFP Photo)
by Apr 24, 2016 12:00 am

After weeks stranded at a closed border in northern Greece, migrants and refugees are seeking out new, irregular routes to get into Macedonia, clambering through forests and over hills under the cover of darkness.

As dusk fell on Saturday evening, a Reuters witness saw a group of up to 70 people crossing into Macedonia from Greece, at a point where there is no razor wire fence between the two countries. They darted in and out of a forest, hiding from authorities.

It was roughly a 20 km (12 mile), or four hour walk from Idomeni, a sprawling tent city hosting thousands of refugees and migrants stranded by a cascade of border shutdowns throughout the Balkans in February.

Others at the campsite were also mulling their options to leave Idomeni and find vulnerable points along the border to cross into the Balkans, the preferred route to western Europe.

"There is no other solution," said Moutaz, a Syrian from Aleppo.

"Let him (others) put himself in my position, what would he do with this life we are living? Will he be ok with it, what is happening and what he is seeing?"

Fellow Syrian Eyas from Damascus said he would attempt to cross the Albanian border further west. "There is a chance you will get there through the Macedonia route but the Macedonian military will send you back," he told Reuters.

Some people chance the trek on their own. Others use traffickers, who charge anything between $350 and $600 per person to smuggle people across the border.

A million refugees, many fleeing Syria, Iraq, Afghanistan and other countries in conflict in the Middle East, Asia and Africa have poured into Europe through Greece since last year.

There are more than 10,200 people camped out in tents in the fields of Idomeni. Greek authorities have repeatedly urged refugees and migrants to move to organized reception centers elsewhere in the country.

Last month, Turkey and the EU sealed a controversial deal intended to halt the flow of illegal refugees into Greece from Turkey in return for financial and political rewards for Ankara.

There is now growing concern that refugees will increasingly use Italy as their conduit into Europe after the EU-Turkey pact, with more boats coming from North Africa - or even across the Adriatic Sea from the Balkans after the border closures there.