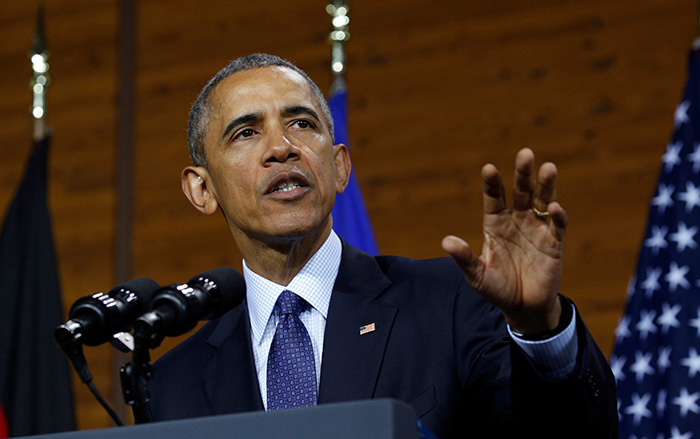 U.S. President Barack Obama announced on Monday that he has approved the deployment of an additional 250 troops to Syria to support local forces in the fight against Daesh terror organization.

"They are not going to lead the fight on the ground but help in assisting local forces in pushing Islamic State [Daesh] back," Obama said in Hanover, Germany.

He said the newest insertion of U.S. forces will not be in combat roles.

"They're not going to be leading the fight on the ground, but they will be essential in providing the training and assisting local forces," Obama said during a speech in Hannover, Germany, that capped a weeklong trip that also took him to Saudi Arabia and Great Britain.

The president's announcement brings to 300 the number of U.S. forces battling extremists in war-torn Syria.

He said the political initiative for peace was also needed "to end the suffering in Syria."

The president called on U.S. allies to contribute more military trainers and to boost economic support for Syria and Iraq.

A contingent of about 50 U.S. special forces was sent to Syria late last year to assist Kurdish-led forces in their ground offensive against Daesh in northern Syria.

The U.S. has reportedly provided limited covert support to Syrian opposition. But Obama has consistently been sceptical about the merits of intervention in Syria's five-year-long civil war, despite calls from Turkey and Gulf allies for more support for opposition fighting Syria's Bashar Assad and Daesh.

Pressure on Obama to end the bloodshed is increasing in the United States, which in is the throes of a fiercely fought presidential election race, and from European allies who want to halt the massive influx of refugees.

Many of Obama's critics have called for a safe zone to be established. But he has insisted that his refusal "is not a matter of an ideological objection on my part". "As a practical matter, sadly, it is very difficult to see how it would operate short of us essentially being willing to militarily take over a big chunk of that country," Obama said.

Obama has come under criticism for his handling of Syria's war, with opponents saying he could have done more to stem the bloodshed.

But the US president -- who came to power vowing to withdraw US troops from Iraq and Afghanistan -- has stood fast in his opposition to plunging the United States into another ground war in the Muslim world.

In an interview with the BBC aired Sunday, Obama said that "it would be a mistake for the United States, or Great Britain, or a combination of Western states to send in ground troops and overthrow the Assad regime." He urged all parties "to sit down at the table and try to broker a transition".

"I have ... again demanded that we have zones where the ceasefire is particularly enforced and where a significant level of security can be guaranteed," Merkel said in southeastern Gaziantep province at a joint news conference with Prime Minister Ahmet Davutoğlu, European Council President Donald Tusk and European Commission Vice President Frans Timmermans.

Turkey has long advocated the establishment of a safe zone for refugees across its southern border between Jarablous on the western bank of the Euphrates River and Azaz after Daesh is removed from the area to protect displaced civilians without bringing them over the border into the country.

Merkel made similar statements in February, saying an area in Syria where no party to the conflict launches aerial attacks would be helpful for a solution.

Syria's civil war, which started in 2011 after al-Assad's regime forces launched a brutal crackdown against protests, has cost a quarter of a million lives and displaced half the country's population, according to United Nations estimates.