Scarred 9-year-old Yazidi boy who escaped Daesh tells it all: 'I hesitated' 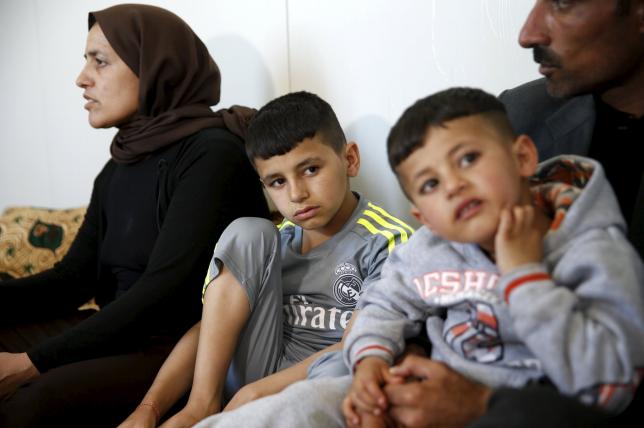 When nine-year-old Murad got the chance to flee from Daesh- the group that repeatedly raped his mother and slaughtered or enslaved thousands from his Yazidi minority - he hesitated.

So powerful was the indoctrination during his 20-month captivity in Iraq and Syria that the boy told his mother he wanted to stay at the camp where Daesh had trained him to kill "infidels", including his own people.

Now in the relative safety of Kurdish-controlled territory, Murad's mother told Reuters how she had struggled to persuade her son - like other Yazidi boys being prepared for battle - to escape earlier this month with her and his little brother.

"My son's brain was changed and most of the kids were saying to their families 'Go, we will stay'," she said, declining to give her name. "Until the last moment before we left, my son was saying 'I will not come with you'."

Yazidi boys appear to be part of broader efforts by Daesh to create a new generation of fighters loyal to the group's ideology and inured to its extreme violence. The training often leaves them scarred, even after returning home.

Daesh captured Murad, his mother and brother in August 2014 at their village near the Iraqi town of Sinjar. During that offensive, the terrorist group massacred, enslaved and raped thousands of Yazidis.

The United States launched air strikes against the militants partly to save the survivors and last month said the attacks on Yazidis, whose syncretic faith combines elements of Christianity, Zoroastrianism and Islam, and other groups amounted to genocide.

More than a third of the 5,000 Yazidis captured in 2014 have escaped or been smuggled out, but activists say hundreds of boys are still held.

Dressed in a long brown skirt and matching headscarf, the mother described how Murad had finally agreed to escape, allowing people smugglers to spirit the family by a convoluted route to a refugee camp near the northern Iraqi city of Duhok where they are living now.

Murad, wearing a jersey of the Spanish football club Real Madrid, sat with his mother on the floor of a spartan trailer in al-Qadiya camp, twiddling his thumbs and resisting answering questions.

Most of the time Murad's mother managed to stay with her two sons as Daesh shuffled them around cities and towns in its so-called "caliphate" spanning the borders of Iraq and Syria. These included its de-facto capitals Mosul and Raqqa, as well as the ancient city of Palmyra which has since fallen to Syrian regime forces.

"They were teaching the children how to fight and go to war to battle the infidels," the mother said, adding that those to be killed included Shi'ite Muslims, the peshmerga forces of Iraqi Kurdistan and the Syrian Kurdish YPG militia.

Daesh dressed the boys in the same long robes they wore, and trained them how to use guns and knives. "They were assessing them for how well they had learned to fight. Daesh then showed the families videos of killing. Among them they saw their sons also taking part."

Daesh also forced Murad to sit through extremist lessons, according to his mother, who said she had been beaten as well as raped by at least 14 men.

A 16-year-old boy taken from the same village south of Sinjar recounted similar treatment. He spent two months in a religious school where Daesh taught its perverted, ultra-hardline ideology which labels most outsiders as 'infidels' and has been denounced by senior Muslim authorities.

"They told us, 'You are Yazidis and you are infidels," said the teenager, who withheld his name and wrapped his head in a scarf, fearing retribution against his brother and father still under Daesh rule.

The teenager said he was made to work in a sweatshop with other boys, sewing military clothes for the fighters.

Around 750 other children have escaped in recent months but a few thousand more remain missing, according to Yazidi activists Khairy Ali Ibrahim and Fasel Kate Hasoo, who document crimes against their community.

Twenty-five children who escaped from Daesh training camps have since passed through Qadiya, 10 km (6 miles) south of the Turkish border, but only six remain, they said. The rest have sought refuge in Europe, joining the wave of migrants fleeing conflict across the region.

Murad's family escaped when the fighter who had "purchased" his mother left the house where she and the boys were staying to get food. Put in contact with the people smugglers by a friend, they spent the night at a safe house before a nine-hour journey by motorbike to territory held by Syrian Kurds.

After three nights in the town of Kobani on the Turkish border, they made their way to Iraqi Kurdistan.

For boys who have reached relative safety, new burdens await them and their families. Most Yazidis have had to spend small fortunes on smugglers' costs to rescue loved ones - Murad's family raised $24,000 to get the three home.

Many families take small loans from relatives and neighbors, who later demand repayment. Promises from charities and government agencies to help cover those costs have fallen through, they say.

There are also psychological costs.

Murad's mother said she could tell her boys had been traumatized by the ordeal.

Her younger son, five-year-old Emad, speaks little but plays peek-a-boo and trots in and out of the room. Murad is clearly more affected: he rarely smiles, struggles to maintain eye contact, and fidgets constantly.

The teenager who was put to work in the sweatshop says he was mature enough to brush off Daesh's brutality.

"I was dealing with them only because I was afraid, but now that I'm back, I'm just like I was before," he said. A cousin, though, later admitted his reintegration had not been easy, declining to go into details.

Children introduced to Daesh's ideology are likely to consider it normal and defend its practices, according to Quilliam, a London-based anti-extremism think tank.

"They are unable to contribute constructively to their societies because they do not develop the ability to socialize," it said in a report last month.

The Yazidi children at Qadiya need regular psychological treatment which remains out of reach, said the activist Hasoo.

"Most of the boys after fleeing tried to implement Daesh's ideas," he said. "There were cases of children wanting to kill one of their friends in the camp. Others would play out the actions they had been trained on."