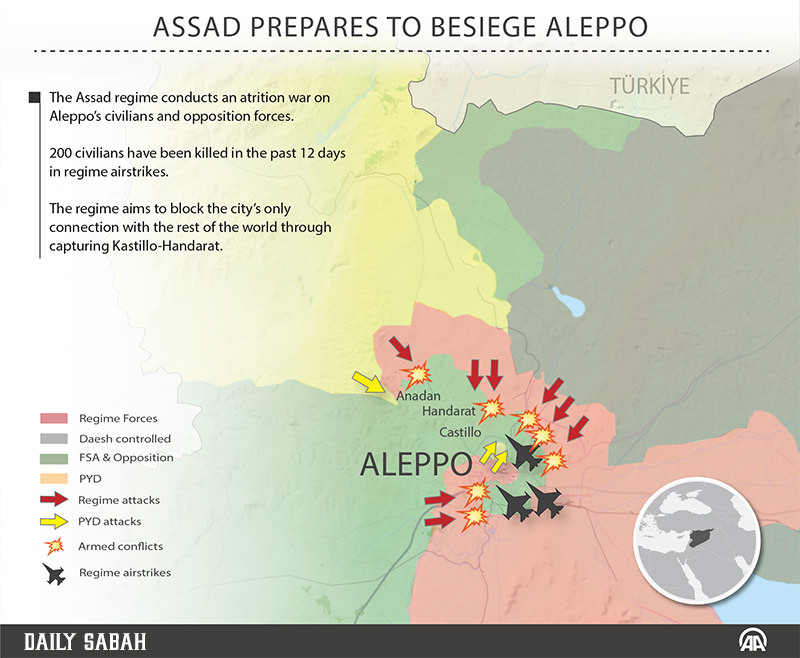 Aiming to besiege the only major Syrian city where the opposition is still in control, Assad regime forces have increased the pace of their attacks against northwestern areas connecting the city with the rest of the world, whereas U.S. efforts to convince Russia to renew the truce have been unfruitful so far.

As part of conducting a war of attrition against the residents of Aleppo already suffering from shortages of basic government services, more than 200 civilians have been killed in regime airstrikes conducted in the past 12 days.

Following the Russia-backed attack on February that cut off the main humanitarian supply route between the Turkish border and Aleppo, the regime now aims to capture the area between Kastillo and Handarat on the northwestern outskirts of the city, which is the only connection between Aleppo's opposition held areas and the rest of the world.

The opposition-held towns of Anadan and Hraytan, located further west of the narrow strip, are also being attacked by regime forces.

Meanwhile the regime and the PYD, which cooperated in closing the route between Aleppo and Turkey, continue their cooperation in the area. Holding the Sheikh Maqsoud neighborhood located just south of the Kastillo road, a PYD attack against the area was repelled by opposition forces three weeks ago. PYD also frequently clashes with the opposition in Ashrafiyye district. The regime conducts airstrikes in coordination with the PYD when its militia is under pressure in the frontline.

Despite the U.N. brokered ceasefire still in effect in theory, the Assad regime conducts air strikes,artillery and rocket attacks to the city's northwestern outskirts as well as the city center that houses thousands of civilians. The agreement the U.S. and Russia reached three days ago does not include Aleppo and only effects the region north of the coastal city of Latakia and East Ghouta district in Damascus.

On April 27, the Al-Quds hospital located in the war-ravaged Sukari neighborhood of Aleppo was destroyed in a regime airstrike, killing the city's only pediatrician, five health workers and 30 civilians. A mosque in the neighborhood was also bombed on Friday without casualties, as Aleppo residents were warned not to attend Friday prayers en masse.

Russian Defense Ministry officials state that even if a ceasefire had been reached, it would exclude several groups, including the Al-Qaeda affiliated Nusra Front. The U.S. State Department had earlier warned that Russia is targeting civilians by using the excuse of striking the Nusra Front.

Local sources speaking to Anadolu Agency (AA) say that the civilian areas targeted in airstrikes are not controlled by the Nusra Front, while its presence in the city center is only symbolic.

Supported by the Iran-backed Shiite militia, the regime forces shell the villages in Hani Touman district in the southwest, while the Al-Eis town in the further south of the city, which was captured by opposition forces in April in response to attacks in East Ghouta, is also under regime attacks to recapture the town.