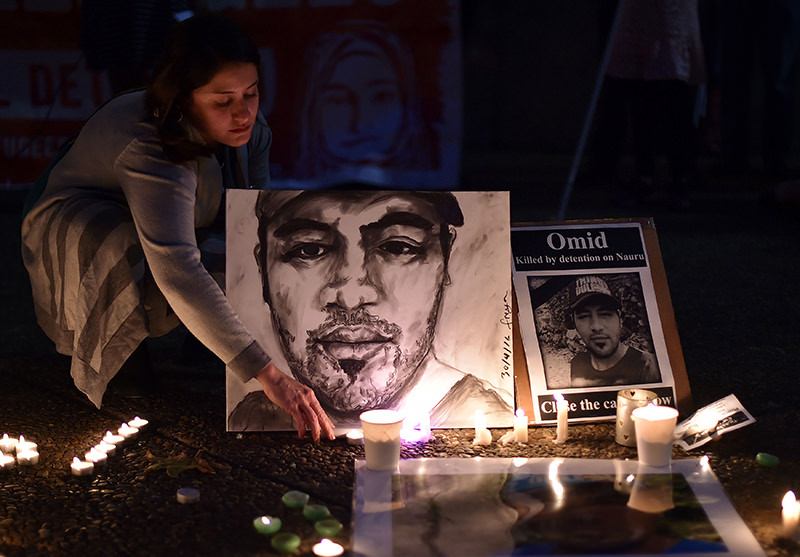 Participants arrange candles next to the portriat of an Iranian refugee, who died after setting himself on fire, in Sydney on April 30, 2016. (AFP Photo)
by Anadolu Agency May 02, 2016 12:00 am

A 21-year-old Somali woman has become the second refugee to set herself on fire at an offshore Australian detention center on the Pacific island nation of Nauru in less than a week.

Nauru's government said Monday that the woman was critically injured and that authorities had requested an emergency evacuation while Australian doctors treated her on the island.

"These actions are purely and simply being taken because they believe that political protests will influence the Australian Government and possibly help them gain entry to Australia," said the statement, cited by news broadcaster ABC.

"Refugee advocates must stop giving refugees and asylum seekers on Nauru false hope and stirring up these protests," it added. "They are making the situation worse and must take responsibility for their actions and words."

The victim had been among three refugees sent back to Nauru last week after receiving medical treatment in Australia, the Sydney Morning Herald cited refugee advocates as saying.

Last Wednesday, a 23-year-old Iranian poured petrol on himself and ignited it in front of United Nations representatives visiting the center. He died at a Brisbane hospital two days later.

On Monday, the ABC reported that his wife had told an official from Doctors for Refugees that he had suffered without morphine for 10 hours and waited 24 hours for a medical airlift to Australia's mainland.

Under its immigration policy, Australia detains asylum seekers who arrive by boat at offshore detention centers including Nauru, where conditions have been described as appalling by rights advocates.