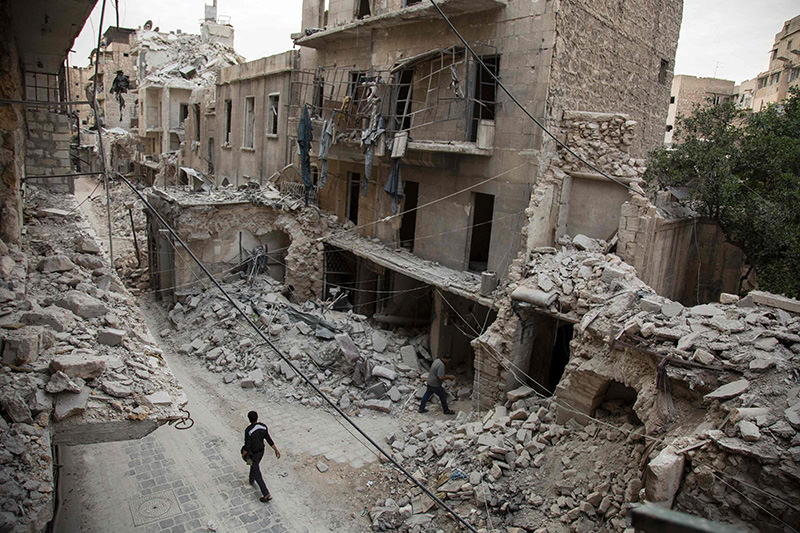 Syrian opposition fighters on Tuesday shelled government-held parts of Aleppo, killing at least 12 people, as the regime forces claimed they were repelling a wide offensive by the rebels in the country's largest city. Activists, meanwhile, said government forces were also shelling rebel-held parts of the city, killing two people and wounding several.

The escalation came as the diplomatic focus moved to Moscow where the U.N. envoy for Syria started talks in efforts to restore a piecemeal cease-fire that would also include the contested northern city.

Staffan de Mistura is expected to push that the truce also cover Aleppo, which has seen an escalation in violence in recent weeks. De Mistura's meeting with Foreign Minister Sergey Lavrov came a day after he met with U.S. Secretary of State John Kerry in Geneva.

In opening remarks in Moscow, de Mistura said "we need to make sure the cessation of hostilities is brought back on track."

Aleppo has been the center of violence over the past 12 days that left more than 250 civilians dead in the contested city. The city was excluded from a truce declared unilaterally by the Syrian military last week for the capital, Damascus, and its suburbs and the coastal province of Latakia.

The TV said one of the rockets hit the Dubeet hospital in the central neighborhood of Muhafaza.

"Shells and mortar rounds are raining down on every neighborhood Aleppo," said Aleppo-based health official Mohammad Hazouri, speaking from Al-Razi hospital. He said four people were killed and more than 30 wounded in Dubeet hospital alone, adding that half the casualties at the hospital were women and children.

He said the rebel bombardment of government-held parts of Aleppo on Tuesday killed a total of 12 people and wounded more than 70.

Syrian state agency SANA reported that in addition to the hospital, several other regime-held neighborhoods were targeted by rocket shells, killing at least 14 civilians and injuring dozens.

The Lebanon-based Al Mayadeen TV that has reporters in the government-held parts of Aleppo showed damage on both sides of the street in front of the hospital, which also appeared heavily damaged.

Cars in the street were scorched and some were turned over. The shops on the other side of the street showed moderate damage as smoke still climbed out of the wreckage.

The Syrian military said in a statement it is repelling a wide scale attack on Aleppo launched by "terrorists" — a government term that includes all armed groups fighting Bashar Assad's forces.

Tuesday's statement said the attack was preceded by heavy shelling of residential areas of the city, which caused civilian casualties, including at a hospital that was hit. The regime forces said the multi-pronged attack on Aleppo was launched by armed terrorist groups, including al-Qaida's branch in Syria, the Nusra Front, Ahrar al-Sham and the Army of Islam.

The statement issued by the army command said the attack was at "a time when international and local efforts are being made to shore-up the (cessation of hostilities agreement) and to implement...calm in Aleppo".

"Our armed forces are currently working on repelling the attack and appropriately returning fire," it said.

Information Minister Omran al-Zoubi warned militants they will face harsh retaliation for the shelling of civilian areas, saying the government's "patience is running out and if they don't stop targeting civilians in the coming hours ... they will pay a high price."

The activist Britain-based Syrian Observatory for Human Rights confirmed the shelling of government-held parts of the city, and also said that seven were killed, including a child. The Observatory said more than 50 were wounded, including some who were in critical condition, which could raise the death toll.

Also in northern Syria, warplanes carried out intense airstrikes on the city of Raqqa, the de facto capital of the Daesh terrorist group, in the early hours Tuesday. Activist groups said it was not clear if the warplanes were Russian or those of the U.S.-led coalition.

The Observatory, which has a network of activists around the country, said there were more than 35 air raids and that 18 people were killed, including five members of the Daesh group. It said dozens were wounded.

The anti-Daesh group "Raqqa is being Slaughtered Silently" said the airstrikes killed 10 and wounded dozens — but different casualty figures are common in the chaos of Syria's civil war. The group said there were calls from mosque loudspeakers for the residents to donate blood.

Daesh suffered major setbacks over the past months in Syria against regime forces and U.S.-backed PYD militia, including the loss of the central historic city of Palmyra.