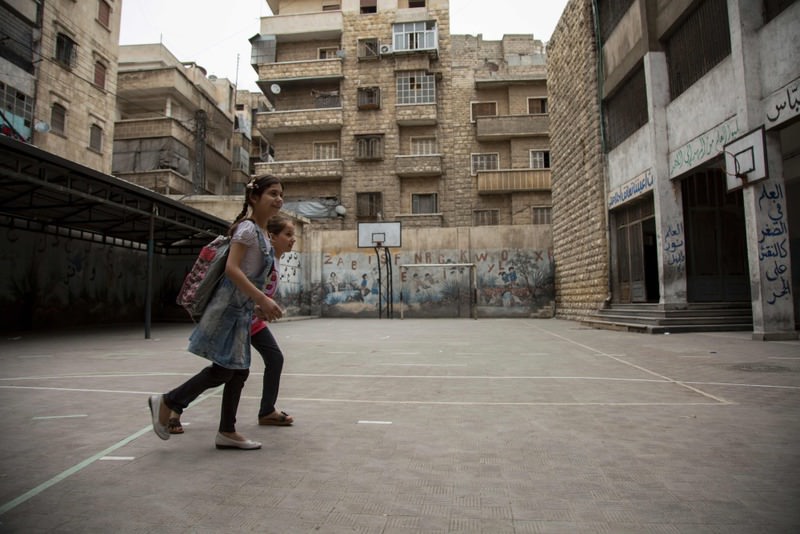 Syrian girls arrive at school in Aleppo's opposition-held eastern district of Shaar on May 7.
by Daily Sabah with Wires May 09, 2016 12:00 am

A truce was extended by 72 hours and desperate residents started to return home after days of violence in Aleppo, where Syrian regime forces hit opposition-held areas of the city, killing and wounding dozens of civilians

Displaced families returned home and schools reopened in opposition-held districts of Aleppo on Saturday after a truce was extended for 72 hours in the battleground northern Syrian city.

More than 300 civilians were killed in two weeks of fighting in the divided city before the truce took hold on Thursday, with regime airstrikes on the opposition-held east.

Residents trickled back into eastern areas of Aleppo, encouraged by a halt in the deadly violence, an Agence France-Presse (AFP) reporter said. "I decided to come home after relatives told me it was calm," Abu Mohammed, a father of six, said. "We left because it was carnage here. The airstrikes were incredible," he said of the opposition-held Kalasseh district.

The international community hopes that a drop in fighting can revive faltering peace talks to end the five-year war that has killed more than 270,000 people and displaced millions. Schools in eastern Aleppo reopened Saturday after staying closed for more than two weeks. "There were many bombings, so our parents got scared and stopped sending us to school," one schoolboy told AFP.

Russia's Defense Ministry said the truce had been extended "in order to prevent the situation from worsening," just minutes before an initial 48-hour truce was due to expire.

"The regime of silence in the province of Latakia and in the city of Aleppo has been extended from 00:01 [local time] on May 7 [2101 GMT Friday] for 72 hours," a ministry statement said.

Violence in Aleppo last month severely threatened a nationwide cease-fire between Bashar Assad's regime and opposition factions. Washington has been working with Moscow to pressure the regime to stop the violence and revive the Feb. 27 truce. "While we welcome this recent extension, our goal is to get to a point where we no longer have to count the hours and that the cessation of hostilities is fully respected across Syria," U.S. State Department spokesman John Kirby said. But fighting raged elsewhere, the Britain-based Syrian Observatory for Human Rights said.

In the central city of Hama, a raid by Syrian security forces on a prison failed to end a mutiny involving around 800 mostly political detainees sparked by an attempt to transfer inmates to another jail near Damascus where executions have been reported.

The head of Syria's main opposition group, Riad Hijab, on Saturday called for "intervention from the U.N. Security Council to guarantee the safety of detainees in the Hama prison."

An international outcry has grown over airstrikes on Thursday on a camp for the displaced near the closed Turkish border that killed at least 28 people, including women and children. Anti-regime activists have blamed the regime, but the Syrian military has denied the accusation.

In Madrid, meanwhile, the Spanish Press Federation (FAPE) announced late Saturday that three Spanish journalists kidnapped in Syria about 10 months ago had been freed. FAPE's president, Elsa Gonzalez, told AFP the journalists were "in a safe place" and would be landing at an air base on the outskirts of Madrid on Sunday. Antonio Pampliega, Jose Manuel Lopez and Angel Sastre had last been seen in July 2015 in Aleppo, from where they were reporting on fighting.

The Arab uprisings that euphorically swept across the Middle East and North Africa several years ago appealed to Syrians who had lived under the dictatorship of the Assad family since 1970, when Bashar's father Hafez Assad seized power. Since then, the majority Sunni population, as well as the rest of the country, was forced to live in a police state that tried to control every movement, organization and business through the use of a wide-ranging intelligence service. In March 2011, Syrians were emboldened enough to raise their voices against the dictatorship. However, the regime's response was not as peaceful as the protests and the country was subsequently dragged into a deadly civil war after opposition groups took up arms against the government. The Syrian civil war is now in its fifth year and has caused the deaths of more than 200,000 people and at least 60,000 are missing. The war has also displaced nearly 10 million people.
RELATED TOPICS