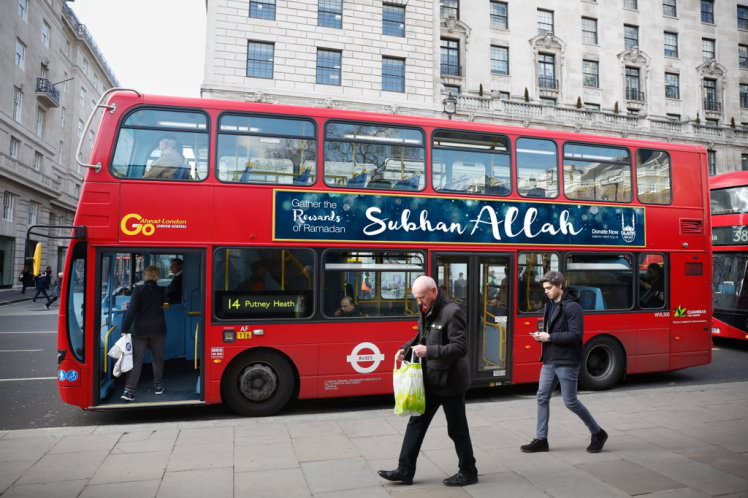 A Muslim charity will use advertisements on public buses across Britain to portray Islam in a positive light ahead of the Islamic holy month of Ramadan, the charity group announced Monday.

London's iconic double-decker red buses will use banners with messages "Subhan Allah", an Arabic phrase meaning "Glory be to Allah", in Latin script.

The campaign will appear on buses in other British towns with significant Muslim populations, including Birmingham, Manchester, Leicester and Bradford.

Islamic Relief, an international humanitarian organization, is behind the campaign from which it hopes to raise £11 million ($15.8 million).

It said the advertisements were designed not only to promote Islam's message of peace but to encourage Muslims to make charitable donations ahead of the holy month.

"In a sense, this could be called a climate change campaign because we want to change the negative climate around international aid and around the Muslim community in this country," Islamic Relief's U.K. Director, Imran Madden, said in a statement.

"International aid has helped halve the number of people living in extreme poverty in the past 15 years, and British Muslims are an incredibly generous community who give over £100 million to international aid charities in Ramadan," Madden said.

London is home to around three million Muslims. The city elected its first Muslim Mayor Sadiq Khan for a four year-term in office last week.

Ramadan is the ninth month of the Islamic calendar and observed by Muslims worldwide with a month of fasting. It is due to begin on June 6 this year.