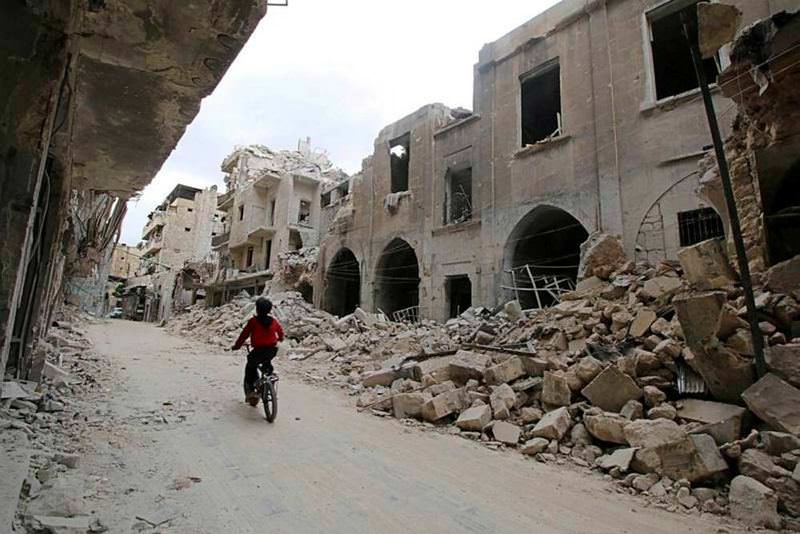 Activists and experts say there could be a new influx of refugees from Aleppo to Turkey following recent violence despite the extension of the truce. Aleppo residents are worried as Russia and the Syrian regime frequently violate the truce and restrict access to water and food

Government forces and opposition groups in the Syrian battleground city of Aleppo agreed on Monday to extend the truce a second time, the Syrian military said, as the United States and Russia vowed to redouble efforts to end the war. The cessation of hostilities was initially to last for two days but was later extended for another two days. However, residents of the city are worried that the fight could restart any time. Since people have limited access to food, clean water and medical equipment, more refugees coming to Turkey could be possible.

The announcement came as Russia and the United States agreed to boost efforts to find a political solution to the five-year war which has killed more than 270,000 people and displaced millions. "The Russian Federation and United States are determined to redouble efforts to reach a political settlement of the Syrian conflict," a joint U.S.-Russian statement published by the Russian foreign ministry said. The two powers also agreed to try extend a February 27 ceasefire across the whole of the country. The cease-fire, which was brokered by Washington and Moscow and excluded militant groups, including Jabhat al-Nusra and DAESH was greatly strained by the upsurge in violence in Aleppo. Washington and Moscow on Monday hailed some "progress" in reducing the fighting but admitted to ongoing "difficulties" in achieving a de-escalation in some areas as well as in ensuring humanitarian access to besieged areas. The opposition groups who accuse the regime and its main ally Russia of violating truce, had yet to confirm the extension of the truce, which was decided after nearly 300 people were killed in an uptick in fighting in Syria's largest city since late April.


Despite the truce that is expected to be in force across the country, the Britain-based monitor also reported 10 civilians killed on Monday by regime bombardments in the northwestern province of Idlib which is controlled by Al-Nusra Front. The airborne raids, by either Syrian or Russian warplanes, struck the town of Binnish, 6 km from the provincial capital Idlib. They wounded a number of others, the Observatory said. It said a local insurgent commander was among those killed.

In the statement from Moscow, Russia and the U.S. restated their commitment to the ceasefire and vowed "to intensify efforts to ensure its nationwide implementation." "We also intend to enhance efforts to promote humanitarian assistance to all people in need," they said. To this end, Russia "will work with the Syrian authorities to minimize aviation operations over areas that are predominantly inhabited by civilians or parties" to the ceasefire, they added. Washington meanwhile said it would step up assistance to its allies in the region "to help them prevent the flow of fighters, weapons or financial support to terrorist organizations across their borders." U.N.-brokered talks on the conflict held in Geneva fell apart three weeks ago when Syria's main opposition High Negotiations Committee (HNC) suspended its formal participation. In telephone talks Monday US Secretary of State John Kerry and Russian Foreign Minister Sergei Lavrov stressed "the need to pursue negotiations between Syrian authorities and all the opposition under U.N. mediation," according to the Russian foreign ministry statement.

The fate of Bashar Assad is a major stumbling block in efforts to end a half-decade of war. In Paris, France called for the Syrian government and rebel forces to return to the negotiating table in Geneva "as soon as possible". Speaking after a meeting with several Arab and Western backers of the Syrian opposition, French Foreign Minister Jean-Marc Ayrault also called for "concrete guarantees on the maintenance of the ceasefire" and access for humanitarian aid on the ground. Ayrault met with his Saudi, Qatari, Turkish and UAE counterparts in Paris. Kerry attended the talks but sources said he played a low-key role in a sign that Washington still believes the best hope for progress is to work most closely with Moscow. Arriving for talks with Ayrault, Kerry held up the joint U.S.-Russian statement as "a commitment by Russia" to try rein in Assad's bombardments. "But again, the proof will be in the eating of the pudding, not the making, and we'll have to see what happens," he said. Ayrault accused the regime of not putting forth any concrete proposals in Geneva and of undermining the principles of the revived peace process launched in Vienna last year. He described Monday's meeting as a mobilization of the international community but said it was not meant to replace the meetings of the International Syria Support Group, which brings together outside backers of both the Syrian government and the opposition, including the US, Russia, Iran and Saudi Arabia.A diplomatic source said it had taken a great deal of effort to persuade Kerry to attend because he did not want to upset the Russians who were strongly opposed to the meeting. The United Nations has sought in vain for months to find a diplomatic solution to the conflict, which has also forced millions to flee.

In February, almost 110,000 refugees headed toward the Turkish-Syrian border following offensives by the regime forces of Syria's Bashar Assad against western Aleppo, which has continued for the last week with the support of Russian airstrikes. Aleppo was once again the target of the regime last summer, and thousands of refugees fled toward the border following the regime's violence. The International Committee of the Red Cross (ICRC) warned that the intensification of fighting threatens to cause a humanitarian disaster for millions of people. The overall level of violence in Syria was significantly reduced in the days following the declaration of a partial nationwide truce in February. But the latest round of Syrian peace talks, which ended in Geneva last month having made little progress, were marred by the drastic escalation of fighting in Aleppo and elsewhere.
RELATED TOPICS