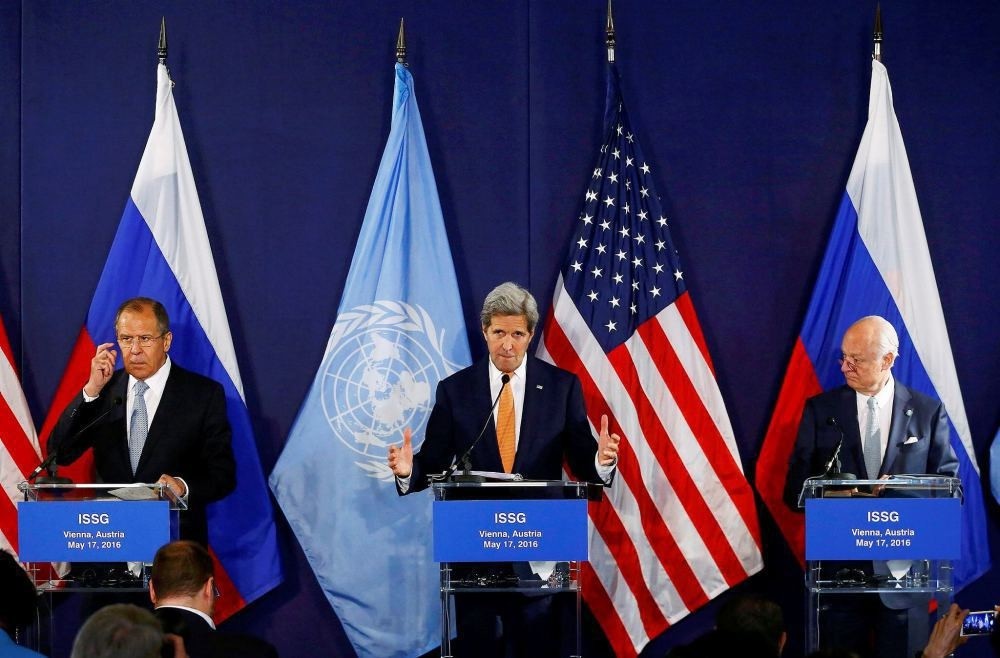 Russia, the U.S. and the U.N. have failed to reach a concrete agreement on the Syrian civil war and the future of Assad. While the need for humanitarian aid was emphasized at the talks, there was no solution given prevent the regime from besieging cities

Major powers sought at talks on Tuesday to re-impose a ceasefire in Syria and ensure aid reaches besieged areas, with Moscow and Washington deeply divided over the fate of Bashar Assad and violence rumbling around the country. The talks have failed again and a new date for next peace talks has not been arranged. "We have agreed consequences for any side's actions that have an agenda other than that of trying to reach an agreement and trying to reach peace," said U.S. Secretary of State John Kerry at the end of the talks in Vienna while Russian Foreign Minister Sergei Lavrov repeated Russia's insistence on supporting the regime. U.N. special envoy for Staffan De Mistura said the parties will focus on humanitarian issues and maintenance of shaky ceasefire. "The issue is still waiting for some type of concrete outcome of this meeting but we cannot wait too long, we want to keep the momentum," he said. The aim of the conference, which brings together 17 countries backing the two warring sides, is to convince armed factions and opposition leaders to restart negotiations with the government.

Officials and diplomats said the talks, including the United States, Russia, Iran, European and Middle East powers, were unlikely to lead to major decisions that could change the course of the five-year war that has killed more than 250,000 people. A surge in bloodshed in Aleppo, Syria's largest city before the war, wrecked a partial "cessation of hostilities" sponsored by Washington and Moscow from February, which had allowed U.N.-brokered indirect talks that included the warring sides to take place in Geneva. Those talks collapsed last month after the opposition walked out due to a surge in bloodshed. Staffan de Mistura hopes to launch a new round of peace talks between the two sides by the end of May. "We'll need to see the guarantors of the ceasefire - Russia and the U.S. - putting something down that will really convince the opposition that this process is worthwhile," a senior Western diplomat involved in the talks said. "Sadly, I don't sense that and fear the U.S. will try to impose a text that is excessively optimistic, but for which its implementation will not be possible." The Geneva talks aim to end a war that has created the world's worst refugee crisis, allowed for the rise of DAESH and drawn in regional and global powers.

Lavrov claimed that Russia does not support Assad himself but the regime. However, it is reported that Moscow has started constructing a new army base in Syria's Palmyra. The Russian military is constructing a new army base in the central Syrian town of Palmyra, within the protected zone that holds the archaeological site listed by UNESCO as a world heritage site and without asking for permission from relevant authorities, an American heritage organization and a top Syrian archaeologist said Tuesday. The American School of Oriental Research's Cultural Heritage Initiative posted pictures from the satellite imagery and analytics company DigitalGlobe that show the construction on the edge of the ancient site that was damaged by DAESH, which held Palmyra for 10 months. Syrian troops backed by Russian airstrikes captured Palmyra in March and fighting continues miles away until this day. Russian demining experts have detonated hundreds of bombs left behind by the extremists at and near the site since the town was captured. A top Syrian archaeologist said the presence of Syrian and Russian troops in Palmyra is important to prevent DAESH from coming back. Maamoun Abdulkarim, head of the Antiquities and Museums Department in Damascus, told The Associated Press that the Russians are building small barracks that includes offices and clinics. Abdulkarim said his organization was not asked for permission but added that DAESH is close to the town and the presence of Russian and Syrian troops is important to ensure that the site remains in government hands. "We refuse to give permission even if it was for a small room to be built inside the site whether it is for the Syrian army, Russian army or anyone else," Abudlkarim said by telephone from Damascus. "We will never give such permission because this will be in violation of the archaeology law."

Moreover, the parties' emphasis on humanitarian aid to besieged areas seem unclear and any way, accounting for stopping the regime from besieging new areas has not been expressed. Opposition fighters and officials in a besieged Syrian town on the outskirts of Damascus believe government forces are preparing an assault after they turned back an aid convoy last week. Daraya, situated close to a large air base and just a few kilometers Assad's palace, had seen little violence since a broader cessation of hostilities agreement came into effect at the end of February. But, with the truce rapidly unravelling across Syria, government forces began shelling the town on Thursday after refusing entry to the first aid convoy it would have ever received. Known for its peaceful protests in the early days of the uprising against Assad, Daraya has been besieged and regularly bombed since 2012. "Large convoys of (government) troops are moving from the airport and from Ashrafiyat Sahnaya (the next town south)," said Abu Samer, spokesman for the Liwa Shuhada al-Islam opposition group. "We are prepared to repel their assault but our main fear is for the civilians besieged in the town who face severe shortages of food."
RELATED TOPICS