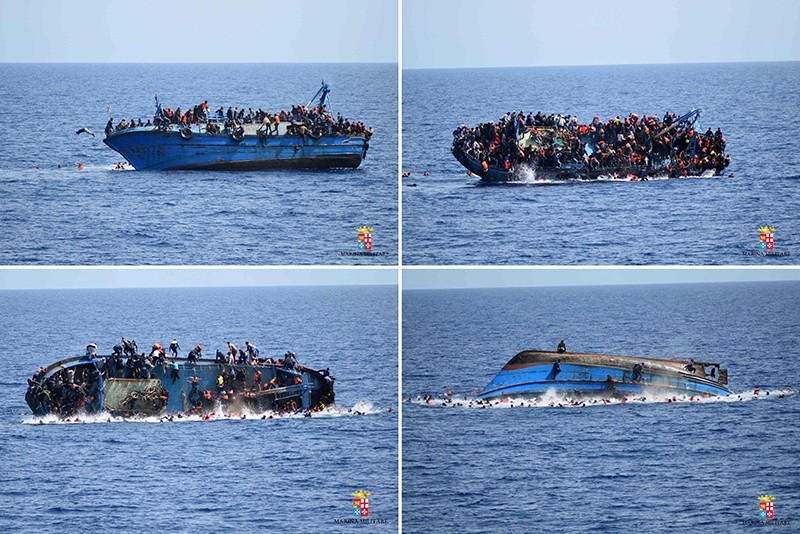 This combination of handout pictures released on May 25, 2016 by the Italian Navy (Marina Militare) shows the shipwreck of an overcrowded boat of migrants off the Libyan coast today. (AFP Photo)
by May 25, 2016 12:00 am

Dramatic images released by the Italian navy Wednesday captured the moment a heavily overcrowded refugee boat overturned in a shipwreck off Libya which left at least five people dead.

The blue fishing vessel, its deck heaving with people, tipped over after the refugees rushed to one side on spotting a rescue ship -- an all too frequent mistake which has led to many disasters in the Mediterranean.

The refugees, many of them men, some already wearing orange lifejackets as a precaution, were captured in rare photographs as they clung to the boat's rails or each other, or dropped like stones into the sea.

Some are seen hanging on to the starboard edge by their fingertips as the trawler rolls, while others try to balance on the rim.

Pictures taken seconds later show the churning waters around the boat peppered with people trying to get away from the vessel which, now overturned, begins to sink, with four people still perched on its upturned hull.

The navy said its Bettica patrol boat had spotted "a boat in precarious conditions off the coast of Libya with numerous migrants aboard" but the trawler overturned shortly afterwards "due to overcrowding".

The Bettica threw life-rafts and jackets to those in the water, while another navy ship in the area sent a helicopter and rescue boats.

Survivors can be seen in the photographs wearing life-rings, some swimming towards the Bettica as the helicopter whirrs overhead. The navy said 562 people had been pulled to safety.

The operation wound up late Wednesday without finding any further survivors or victims.

The migrants had sounded the alarm by calling for help using a satellite phone some 18 nautical miles off Libya.

The Bettica went on to pluck another 108 migrants from their dilapidated vessel in a second rescue operation on Wednesday.

It is not the first time a boat making the perilous journey across the Mediterranean has overturned because of sudden movement onboard when help is in sight.

In August last year, a Palestinian survivor of just such a shipwreck described the moment the boat rolled as "like being flung from a catapult. I could only see heads, all around, amid the waves, everyone pushing down on everyone else to try and stay afloat".

According to the International Organization for Migration, over 1,370 migrants have lost their lives so far this year as they attempt the perilous crossing to Europe.

The latest arrivals bring the number of people rescued and transferred to Italy since the start of the year to nearly 40,000 following the rescue of more than 6,000 since Monday, according to figures collated by the UN's refugee agency (UNHCR) and the coastguard.

The overwhelming majority of those arriving in Italy so far this year have been from sub-Saharan Africa.

Italian media reports warned the number of minors arriving was on the rise. A nine-month old baby girl whose mother died during a crossing this week was being looked after by cultural mediators in the reception centre on Lampedusa island, La Repubblica said.

The UNHCR, aid organisations and the Italian government say there is no sign yet of Middle Eastern refugees switching to the Libyan route to Europe following moves to restrict access from Turkey via the Greek islands.