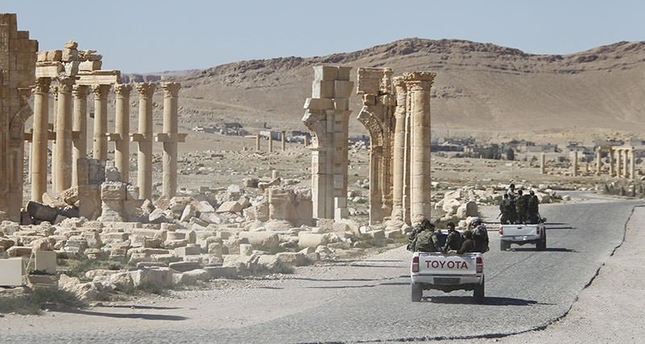 Syrian army soldiers drive past the Arch of Triumph in the historic city of Palmyra, in Homs Governorate of Syria, April 1, 2016 (Reuters Photo)
by Daily Sabah with AFP Jun 01, 2016 12:00 am

A leading German cultural heritage expert on Wednesday said that Assad regime troops are looting the ancient city of Palmyra like the Daesh terrorists who controlled it until March.

Archaeologist Hermann Parzinger, head of the Prussian Cultural Heritage Foundation, was speaking on the eve of a two-day Berlin conference on ways to protect heritage sites in war-torn Syria.

Speaking to media, Parzinger said that Syrian regime soldiers, when they are off-duty, "are conducting illegal excavations" and "have looted" at the UNESCO World Heritage site.

Assad regime troops backed by Russian air strikes and special forces recaptured Palmyra from the Daesh terrorist organization in March, delivering a major propaganda coup for both Damascus and Moscow.

Daesh militants staged mass executions in the Roman amphitheatre, blown up ancient temples and looted relics in the one-time trade hub in central Syria, a major tourist site before the war.

Despite the liberation, "we shouldn't act like everything is alright now," said Parzinger, the former head of the German Archaeological Institute.

He said retaking Palmyra was "an important victory for culture," writing earlier in the Frankfurter Allgemeine Zeitung daily.

"But this victory has not made Assad and his backers the saviours of cultural heritage," he added.

"Assad's soldiers also plundered the ruins of Palmyra before the Daesh takeover, and their rockets and grenades indiscriminately pounded the antique columns and walls when this promised even the slightest military advantage."

Beginning on Thursday, the German government and UNESCO will host over 170 scientists, archaeologists, architects and planners to discuss how to preserve Syria's heritage despite the five-year war that has killed more than 270,000 people.

UNESCO chief Irina Bokova, writing in the Tagesspiegel daily, wrote that "two-thirds of the old town of Aleppo have been bombed and burned" and at other sites, gangs have looted on an "industrial scale."

"Archaeological sites are in the crossfire ... and being misused as military bases," she wrote, while "Palmyra, which had long been insufficiently protected, has experienced indescribable horror and destruction" under Daesh control.

As Syrians mark the fifth anniversary of the anti-regime protests, which started peacefully, hundreds of thousands of people have died while the war has changed the regional and international balances of power due to the involvement of Russia and Iran. In March of 2011, Syrians were emboldened enough to raise their voices against the dictatorship. However, the regime's response was not as peaceful as the protests, and the country was subsequently dragged into a devastating civil war after opposition groups took up arms against the government. The emergence of terrorist groups such as Daesh and the al-Nusra Front has also changed the color of the war, so that the U.S. expanded its so-called war on terror to Syria. The war also caused an unprecedented migration crisis as millions of Syrians, fleeing from the war, are attempting to flee to Europe.