15 killed, 20 injured in airstrike on area near hospital, marketplace in Syria's Aleppo 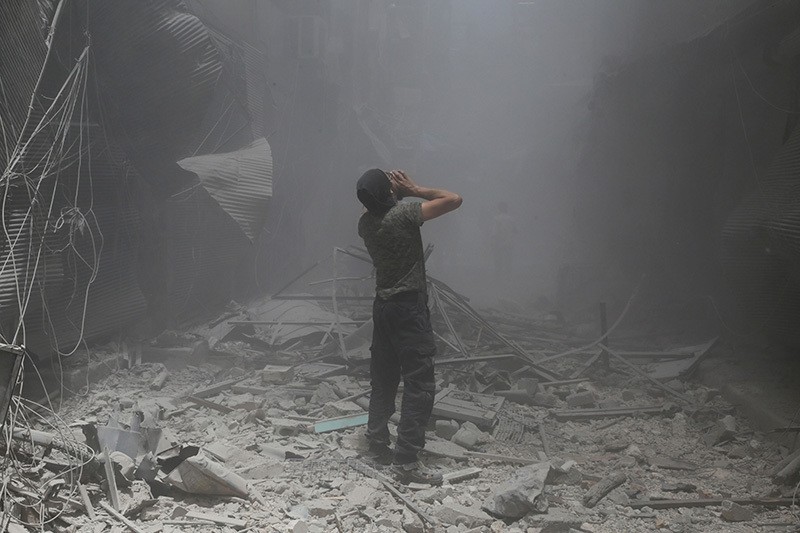 A Syrian man reacts following a reported air strike by Assad forces in the opposition-held neighbourhood of Bustan al-Qasr on June 5, 2016. (AFP)
by Compiled from Wire Services Jun 08, 2016 12:00 am

Syrian government air strikes on opposition-held neighborhoods of the divided second city of Aleppo killed at least 15 civilians and injured 20 on Wednesday, a monitor said.

The Syrian Observatory for Human Rights said at least 10 of the dead (including children) came in strikes just outside the Al-Bayan hospital in the Shaar neighbourhood.

Rescue workers responding to the attacks gave a higher toll of 23 dead.

The northern city of Aleppo has seen an uptick in violence in the last 48 hours. Assad forces are pounding opposition-held eastern parts of the city with strikes from the air.

Ensari said regime helicopters had dropped three barrel bombs in an area that contains a hospital and a marketplace.

Ensari added that women and children were among the casualties and that the hospital had been rendered inoperable by the attack.

He added that rescue workers were now in the process of searching for survivors buried under the rubble of destroyed buildings.

Barrel bombs are improvised containers packed with shrapnel and explosive material. Usually dropped from army helicopters, the low-cost munitions are believed to have killed thousands of people since the Syria conflict began in 2011.