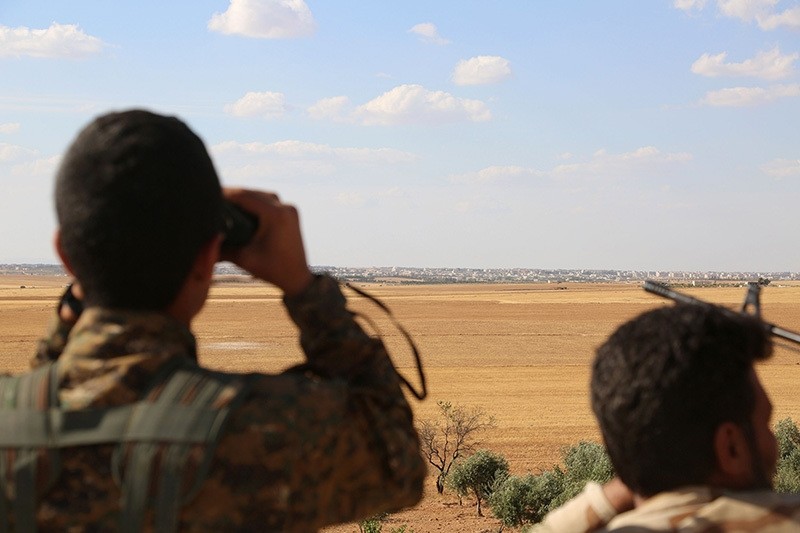 Fighters from the Syrian Democratic Forces (SDF) use binoculars from a view point overlooking the northern Syrian town of Manbij held by Daesh terrorists. (AFP Photo)
by Jun 12, 2016 12:00 am

Hundreds of civilians escaped a besieged terrorist bastion in north Syria on Sunday helped by a US-backed Kurdish-Arab alliance surrounding the town, a monitor said.

Tens of thousands had been trapped inside Manbij after the alliance encircled the transit town on Friday in a major blow to the Daesh terror group controlling it.

"Around 600 civilians fled on foot towards areas held by the Syrian Democratic Forces (SDF) alliance south of the town," said the Syrian Observatory for Human Rights.

Those remaining inside the town were terrified by heavy air strikes in the area, Abdel Rahman said, with food becoming scarce as the alliance has blocked all roads in and out.

At least 223 Daesh terrorists and 28 SDF troops had been killed -- as well as 41 civilians in coalition air raids -- since the alliance offensive against Manbij began on May 31, according to the Observatory.

To the west and northwest of the town, heavy fighting was ongoing as Daesh terrorists launched a counteroffensive against the SDF in a bid to regain control of the road west out of town.

The Britain-based Observatory relies on a network of sources on the ground in war-torn Syria for its information.

Manbij lies at the heart of the last stretch of Daesh-controlled territory near Turkey's border.

Its siege has severed a key supply route for Daesh fighters' money and weapons to the group's de facto Syrian capital of Raqa city.

Syria's war has killed 280,000 people and displaced millions since it erupted with the Assad regime's brutal repression of anti-government protests in 2011.

Daesh has come under attack on several fronts since declaring a cross-border "state" in Syria and Iraq in 2014.