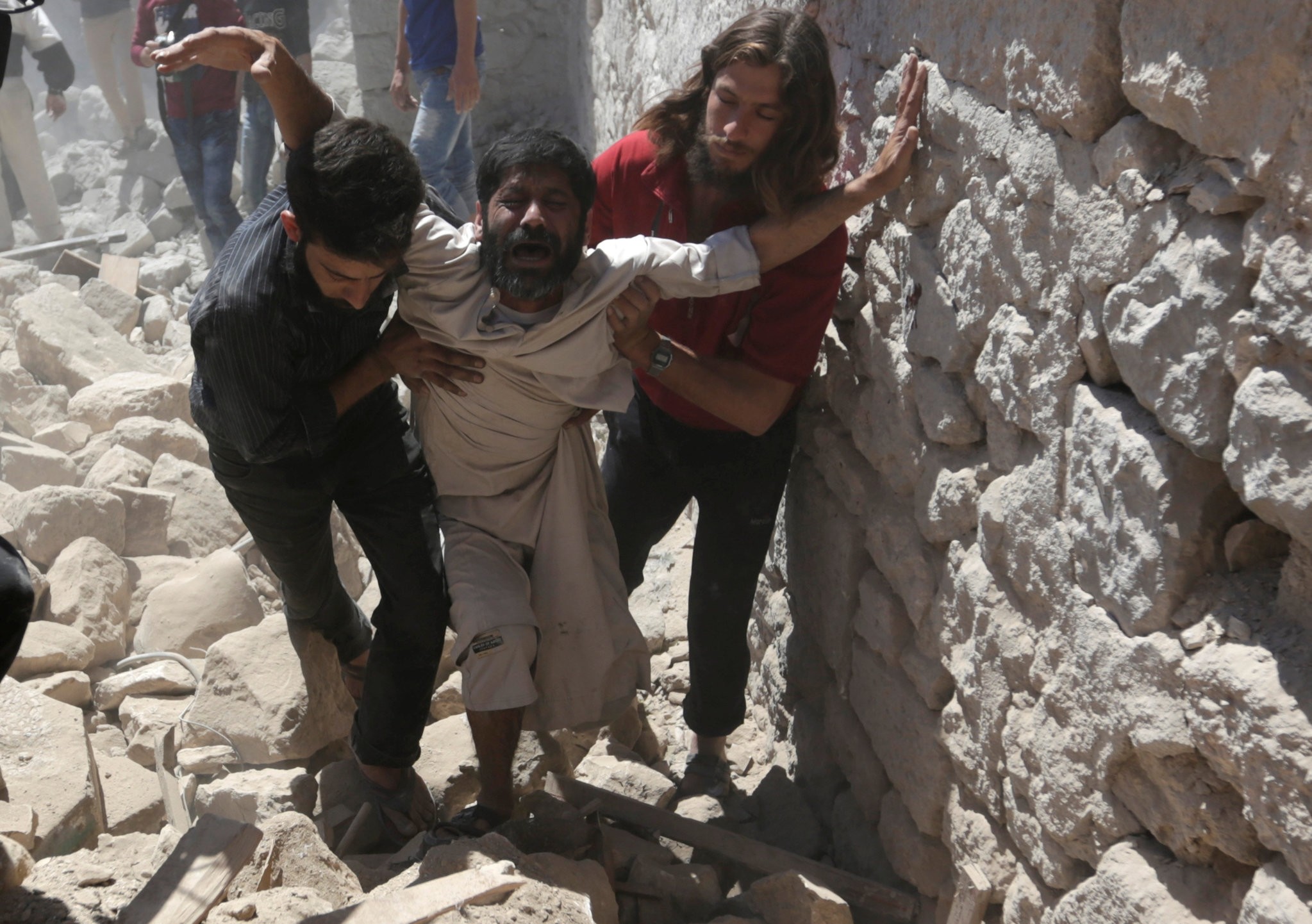 A man whose son was killed reacts at a site hit by airstrike in the rebel-controlled area of Maaret al-Numan town in Idlib province, Syria, June 12, 2016. (REUTERS Photo)
by Compiled from Wire Services Jun 12, 2016 12:00 am

At least 39 people were killed and dozens were injured in airstrikes launched by the Syrian regime and Russian warplanes in Syria's western province of Idlib on Sunday.

"At least 36 people were killed and 50 others injured in the attack," he said.

Al-Faris described the attack as a "massacre" committed by the Bashar Assad regime during the fasting month of Ramadan, which began in Syria last week.

He said rescuers were struggling to extract people from under the rubble of destroyed buildings.

Meanwhile, three people were killed in a Russian airstrike on a residential area in the city of Maaret al-Numan in Idlib.

"Rescuers are looking for survivors following the attack," al-Faris said.

Since April 21, Syrian regime forces and Russian warplanes have intensified attacks on opposition-held areas in Syria, killings scores of civilians.

This comes as the opposition-held sector of Syria's divided city of Aleppo has been cut off from the outside world in recent days by an escalation of air and artillery strikes on the only road in, putting hundreds of thousands of people under effective siege.

A regime campaign to fully capture Aleppo would most likely bury what little hope remains of reviving a diplomatic effort to end the five-year-old civil war, after talks and a ceasefire sponsored by the United States and Russia fell apart earlier this year.

Aleppo, Syria's largest city before the war when it had more than 2 million people, has been divided for years into opposition and government sectors, and capturing all of it has been one of Bashar Assad's biggest goals.

An estimated 350,000 people are still thought to live in the opposition sector, in harsh conditions made worse by the latest attempt to besiege them by cutting off the last remaining route out, the Castello Road, named for Aleppo's old castle.

"The regime was not able to cut the road by land, so it has decided to keep the planes in the sky continuously, hitting everything that passes, regardless of what it is," said Zakaria Malahifji, senior official in the Aleppo opposition group Fastaqim.

"Whoever wants to go on the Castello road is undertaking a suicide mission," he said. "It's been this way for 10 or 12 days. The situation was difficult before - it was targeted and people were crossing with difficulty - but now it is almost cut, nobody dares to use it," he said, speaking at his group's office in the Turkish city of Gaziantep near the Syrian border.

The international focus in Syria in recent weeks has partly turned towards the conflict with Islamic State fighters, as both the government and its enemies have made gains at the expense of the ultra-hardline Islamist militants on several fronts.

But the separate hope of foreign powers -- that the wider civil war could also be resolved -- has broken down, with Aleppo potentially the biggest battlefield of all. Hundreds of people have been killed there since peace talks broke off.

Assad vowed in a speech last week to recapture "every inch" of Syria. Aleppo, he said, would be a "graveyard" for the ambitions of his regional foe, Turkish President Tayyip Erdoğan, who has backed opposition groups.

A pro-Damascus source, who spoke on condition of anonymity, said the reference was a signal of his intentions: "Why this threat? Because there are preparations for something big in Aleppo."

So far, pro-regime ground forces, aided by Iranian and Lebanese Shi'ite militias, have been unable to complete the encirclement of Aleppo by capturing a narrow corridor of territory through which the Castello Road passes.

The highway had long been under sniper fire, but attacks from the air and artillery sharply increased less than two weeks ago, with more planes flying and new rockets and guns moved into range.

"Castello is the road to death to Aleppo. I did not know whether I would make it to Aleppo city alive," said Mohamad Adeeb, an opposition activist who drove the road on Friday.

"I saw death with my own eyes, with corpses lying on the way and dozens of trucks and civilian cars and bodies that none of the civil defence teams were able to recover because of the intensity of the shelling of the regime and Russian warplanes."

Inside Aleppo, the new pressure on the road has driven up prices of goods, adding to the suffering of those still there.

The Syrian Obervatory for Human Rights says more than 300 people have been killed in air strikes and government bombardment of opposition-held Aleppo since April.

Opposition sources say the toll is much higher, with dozens of people currently being killed each day in eastern Aleppo, one of the bloodiest spells it has suffered in the conflict. Civil defence emergency workers operating in opposition-held areas say more than 450 people were killed there in the last month.

"It is a difficult and dangerous period we are going through. Aleppo is almost under siege," Abu Yassine said.