At least 28 civilians killed in Russian, regime airstrikes across Syria 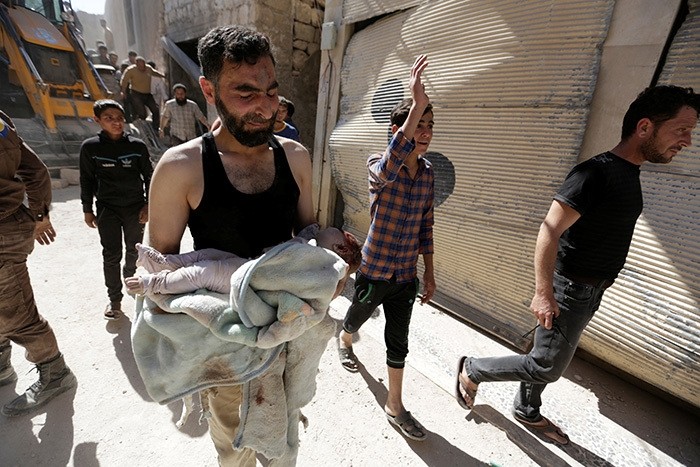 A civil defence member mourns as he carries the body of a dead child at a site hit by airstrike in the rebel-controlled area of Maaret al-Numan town in Idlib province, Syria, June 12, 2016. (Reuters Photo)
by Anadolu Agency Jun 14, 2016 12:00 am

Attacks by a regime helicopter and Russian jets on a residential area of the northwestern city of Aleppo killed 20 and wounded 40 others.

Syrian regime helicopters hit the village of al-Bara in Syria's western province of Idlib with barrel bombs, killing eight and wounding 15 others, according to the civil defense officials.

An activist in Damascus told AA that regime warplanes carried out 15 airstrikes on Tuesday in the city, wounding several people.

Syria has been locked in a vicious civil war since early 2011, when Syrian leader Bashar Assad's regime cracked down on pro-democracy protests – which erupted as part of the "Arab Spring" uprisings – with unexpected ferocity.

Since then, more than a quarter of a million people have been killed and more than 10 million displaced across the war-battered country, according to the U.N.

The Syrian Center for Policy Research has estimated the death toll from the six-year conflict at more than 470,000 people.