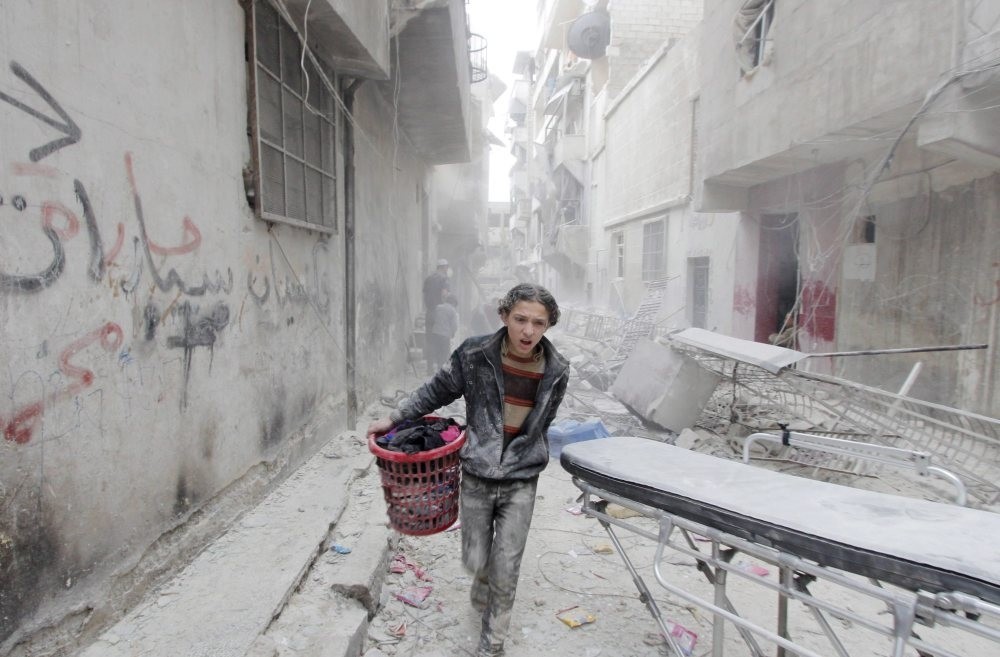 A boy carries his belongings at a site hit by a barrel bomb dropped by the Assad regime in Aleppo's al-Fardous district. (Reuters Photo)
by Daily Sabah Jun 20, 2016 12:00 am
The Syrian regime bombarded the besieged Damascus suburb of Darayya just hours after humanitarian aid was dropped to residents for the first time since 2012. Many people have already died of hunger in the city, which was hit by multiple airstrikes and 24 barrel bombs on Saturday.

Darayya was hit only hours after the food delivery was made, the first in four years. Darayya's city council said that 28 barrel bombs were dropped from helicopters, preventing aid from being delivered to residents. Overnight, trucks carrying medicine, food and flour reached the town. However, in the week that residents of Darayya received the aid, the Assad regime dropped a total of 201 barrel bombs on the town.

Meanwhile, opposition fighters have captured two villages from the Assad regime and their allies in the northern province of Aleppo after days of heavy fighting that left scores of fighters dead, Syrian activists said Saturday.

Hezbollah issued a statement in Beirut on Saturday saying it lost a number of "martyrs" in "direct and fierce confrontations with terrorist organizations." The group denied Arab media reports that said Hezbollah militants were killed in clashes with Assad's forces and struck by Syrian regime warplanes, saying its relations with the Syrian army and other allies are "strong." The number of Hezbollah fighters killed during the clashes in last five days is reportedly over 30.

Assad regime warplanes targeted the Daesh-controlled town of Tabqah with cluster munitions on Sunday, killing at least 10 civilians and injuring some 35 others.

Tabqah is a key location linking Daesh-held territories located on the west of Euphrates River up to Turkish border with the terrorist group bastion Raqqah and territories further east.

Due to the devastating effects of cluster munitions on civilians in both in combat and non-combat periods, 100 states have ratified the Convention on Cluster Munitions and banned the usage of this weapon.

Prominent weapon-exporting countries like the U.S., Russia and China, major regional powers like Brazil and India, and most countries of the Middle East and Asia have not ratified the convention so far.
RELATED TOPICS