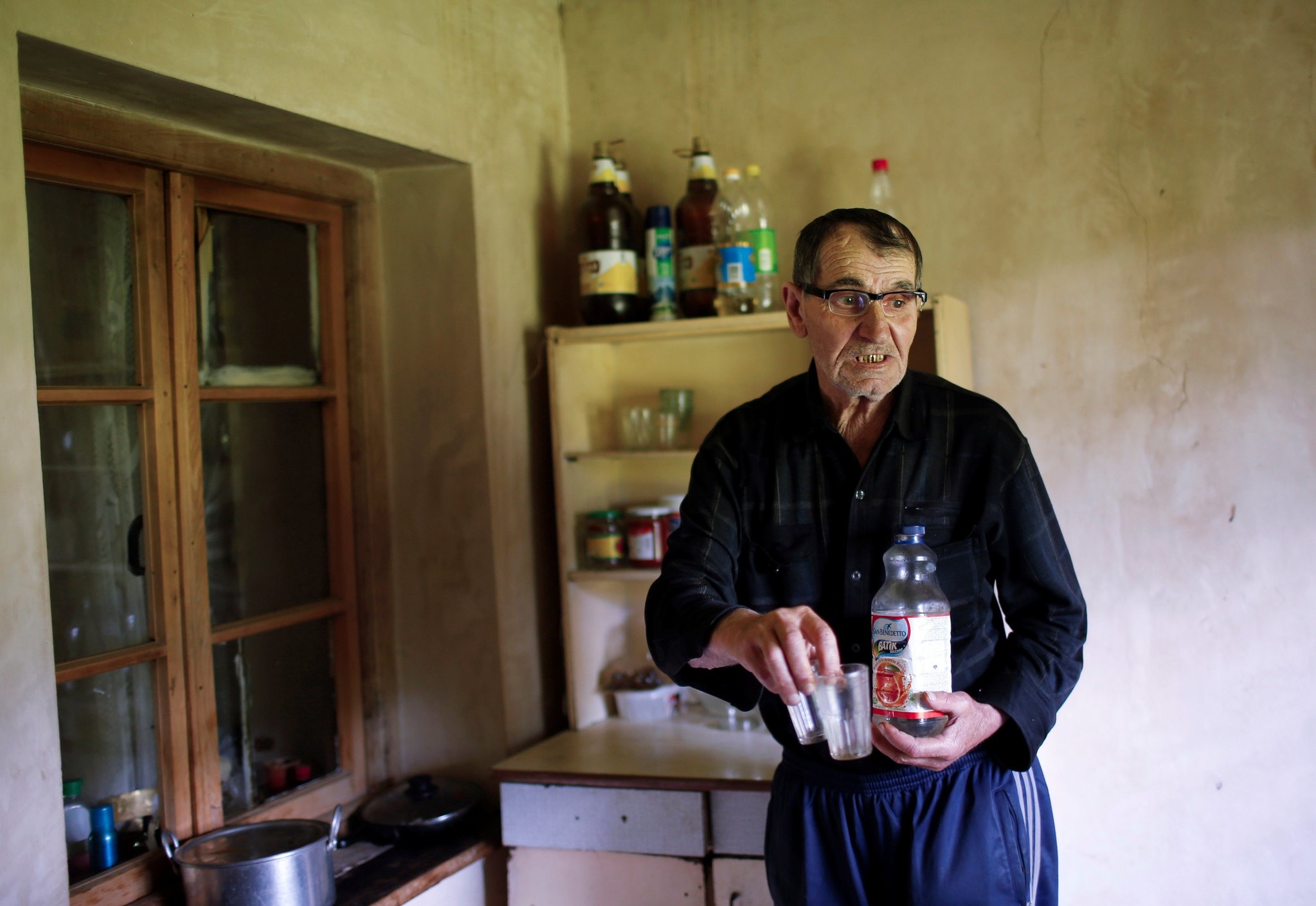 Temur Batirashvili, father of Tarkhan Batirashvili, speaks during an interview at his home in the village of Birkiani in the Pankisi Gorge, Georgia, May 19, 2016. (REUTERS Photo)
by Jul 04, 2016 12:00 am

In 2012, Tarkhan Batirashvili set off from his home in ex-Soviet Georgia on a journey that would pave the way to last week's suicide attack on Istanbul airport.

"He told me: 'Father, I should find my own way in life. This country does not need me," Batirashvili's 73-year-old father, Temur, told Reuters, recalling his son's decision to leave their ethnic Chechen village and head for Turkey, then on to Syria.

Temur said he lost touch with his son after he called once from Syria.

The younger Batirashvili went on to create a force of Russian-speaking fighters under the flag of Daesh, according to U.N. and U.S. officials. The ex-Soviet group that killed dozens of people at the airport on Tuesday is likely to be an offshoot of that force.

Turkish officials say the suspected attackers had ties to Daesh and were from Russia and the ex-Soviet central Asia states of Uzbekistan, and Kyrgyzstan. Turkish media also reported that a man of Chechen origin, Akhmed Chatayev, was the suspected organizer of the bombings.

It was the deadliest attack carried out by ex-Soviet extremists outside their own region since the Boston marathon bombing in 2013, carried out by two young ethnic Chechens whose families had emigrated to the United States.

Well before the Istanbul blasts, the influence of Batirashvili - better known by his nom de guerre Omar al-Shishani, or Omar the Chechen - and his ex-Soviet followers was being felt in areas under the control of Daesh.

Batirashvili became the no.2 in Daesh, referred to as its military commander in a U.S. wanted list which cited a 2014 Daesh video. It was not possible to reach him and not clear if he is still alive.

He gathered around him commanders from Russia's mainly Muslim North Caucasus region, and fighters from central Asia, who carry out key functions in the organization.

According to photographs circulated online, road signs erected in areas controlled by Daesh are sometimes written in three languages - Arabic, English, and Russian - testifying to the important role of Russian speakers.

In many cases these fighters have been influenced by insurgencies at home, pushed out of their own countries by security crackdowns, and won advancement in Daesh through their military skills and ruthlessness.

Batirashvili's journey to Middle Eastern extremism is significant both for the leadership role he took and because it is fairly typical of how young men from ex-Soviet countries become radicalized.

He grew up in the Pankisi gorge, a remote area of Georgia populated largely by people from the Kist community, ethnic Chechens whose ancestors had come to mainly Christian Georgia in the 1800s.

When, after the collapse of the Soviet Union, Chechnya rose up in a rebellion against Moscow's rule, the Kist community were caught up in the fight. Thousands of refugees arrived from Chechnya, and some of the insurgents used the gorge to regroup and prepare attacks.

Batirashvili was the youngest of three sons born in the village of Birkiani. His father was a practising Christian, while his mother, Keto, was from a Muslim father.

"Religion was never an issue in our family, I was always praying in Georgian churches," the father told Reuters in the village in May at the dilapidated house where he lives alone.

Batirashvili joined the Georgian army, where he served in a military intelligence unit. He fought in the August 2008 war when Russian troops attacked Georgia. But he became ill with tuberculosis, and two years after the war was dismissed from the army, his father said.

He came home to the Pankisi Gorge. "He was trying to find another job, but it was hard," said his father, who smokes cigarettes and drinks alcohol -- habits considered sacrilegious by many Muslims. "Then he was arrested."

In 2010, Georgian police raided the family home and found a box full of cartridges. Batirashvili, suspected by police of ties to terrorists active in the gorge, charged him with illegal weapons possession. He served two years in jail, and was released under amnesty.

It was when he returned home after his release that he told his family he saw no future in Georgia and was going abroad, his father said. He went to Turkey, and from there to Syria, where he joined up with extremists under the rule of Syria's Bashar Assad.

His father condemns his son's militant activity, but other family members applaud him. "We lost a big patriot. He was never a terrorist. He is a hero for many here," said his aunt, Esma Borchashvili.

Shishani came to prominence in the fight against Assad's forces for control of Menakh air base, a key military facility in the north of Syria.

One of only a few Daesh leaders with a professional military background, he had several hundred fighters, mostly from ex-Soviet states, under his command for the battle.

Shishani's group, and other rebel forces, kept attacking the base for several months and suffered severe losses, one of the Russian fighters who took part in the battle told Reuters, adding that several of his friends were killed there.

Attacks were organized randomly and there were disputes among commanders, the rebel said. In spite of that, Shishani's people with other groups eventually won the battle in mid-2013. Around that time, Shishani aligned himself to Daesh.

Seizing the base, which since has been ceded to Kurdish forces, was one of the first big victories by Russian speaking militants, helping the Daesh gain territory.

In that battle and in others that followed in Syria and Iraq, militants from Russia's North Caucasus -- a mainly Muslim region that includes Chechnya -- fought alongside people from Central Asia, several ex-terrorists from Russia told Reuters.

They communicated in Russian and normally did not speak Arabic well enough to understand local militants.

According to the former Russian rebel, in Shishani's group Chechens played leading roles. "If you are not a Chechen and you have a Chechen friend it is only until he sees another Chechen. Then he would forget about you," he said.

Shishani's group grew up to about 1,000 fighters by the end of 2013, according to a notice issued by the U.S. government, which offered up to $5 million for any information that would help to track him down.

The commander may have helped Daesh seize the Iraqi city of Mosul, the victory which established the group as the biggest security threat in the Middle East.

At the time of the battle for Mosul, Shishani ordered Daesh fighters to travel to Iraq from Syria and declared a general mobilization to support the offensive, the U.S. government notice said.

Evidence from security services and extremist fighters point to the presence of militants from ex-Soviet states in the Syrian cities of Raqqa and Tabqa, and the provinces of Aleppo and Idlib, as well as over the border in Mosul.

Fighting in Syria in Iraq is, for many ex-Soviet militants, better than staying at home. In Russia's North Caucasus, a crackdown overseen by President Vladimir Putin has pushed insurgents into hiding in mountain forests.

In one part of that region, Dagestan, local officials facilitated the departure of known terrorists, who later ended up in Syria, according to accounts gathered by Reuters.

For Russian speakers who want to join up with Daesh, Turkey is a useful staging post. It does not require people from Russia and Central Asia to have visas to enter.

Some who do not make it to Iraq or Syria, or who spend time with Daesh then quit its ranks, have settled in Turkey. Several former extremists have told Reuters that in suburbs of Istanbul there are communities of Russian-speakers forced to leave home because of their extremist sympathies.

It is not clear how many Russian speaking militants are still in Syria and Iraq but official data shows the flow of fighters from Russia and Central Asia has not stopped.

In October, Russian President Vladimir Putin said between 5,000 and 7,000 militants from ex-Soviet states were fighting in the Middle East alongside terrorist groups.

In June, Russia's Nikolai Bordyuzha, the secretary general of a military alliance of several ex-Soviet countries, raised this estimate to 10,000 militants.