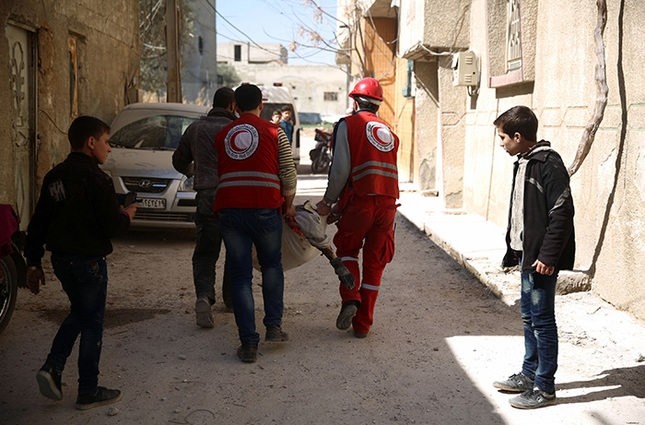 Members of the Syrian Arab Red Crescent carry a body reportedly killed following a Regime airstrike during ceasefire in the rebel-held city of Douma, on February 26, 2016 (AFP Photo)
by Daily Sabah with Wires Jul 11, 2016 12:00 am
Forces loyal to Bashar Assad said a nationwide ceasefire would be extended for another 72 hours from Tuesday, regime-linked media reported on Monday.

In the statement reported by Assad-linked media it was said that "a regime of calm will be extended for a period of 72 hours from one o'clock on July 12."

Regime army and the Russian military, which backs Bashar Assad, have periodically announced temporary local truces in areas of intense fighting, which usually end up being violated by the regime itself.

Accordingly, the Syrian Observatory for Human Rights said that forces loyal to Assad regained area from opposition forces in northern Aleppo province and were coming close to a strategic road Thursday, just a day after the previous cease-fire began.

The group said regime troops and allied paramilitary forces retook control of the area of Ketlet al-Jamae in the Mallah Farms, which overlooks the opposition-held Castello Road.

The advance puts Castello Road, the only supply route to the opposition-controlled areas in Aleppo, under regime forces' direct fire, the observatory added.

Jaish al-Islam also said four of its fighters were killed trying to stop the army from cutting off Castello Road.

Syrian regime forces have been trying for months to recapture the strategic route.

"The opposition groups are engaged in fierce battles in their attempt to take back Ketlet al-Jamae because it is an important area for them," observatory head Rami Abdel-Rahman said.

Aleppo has been divided since mid-2012 when opposition groups seized the east of the city, confining Assad's forces to the west.

Elsewhere, regime forces also attempted to advance in Eastern Ghouta and achieve a breakthrough in the countryside of Damascus amid intensive shelling and airstrikes.

The U.S. and Russia brokered a nationwide cease-fire in February, which held for a time but then collapsed under pressure of localized fighting and a failed political process to end the violence.

There have been attempts since then to reach short-term cessations of hostilities that are often region specific, but they have tended to be short lived.
Last Update: Jul 11, 2016 11:53 pm
RELATED TOPICS