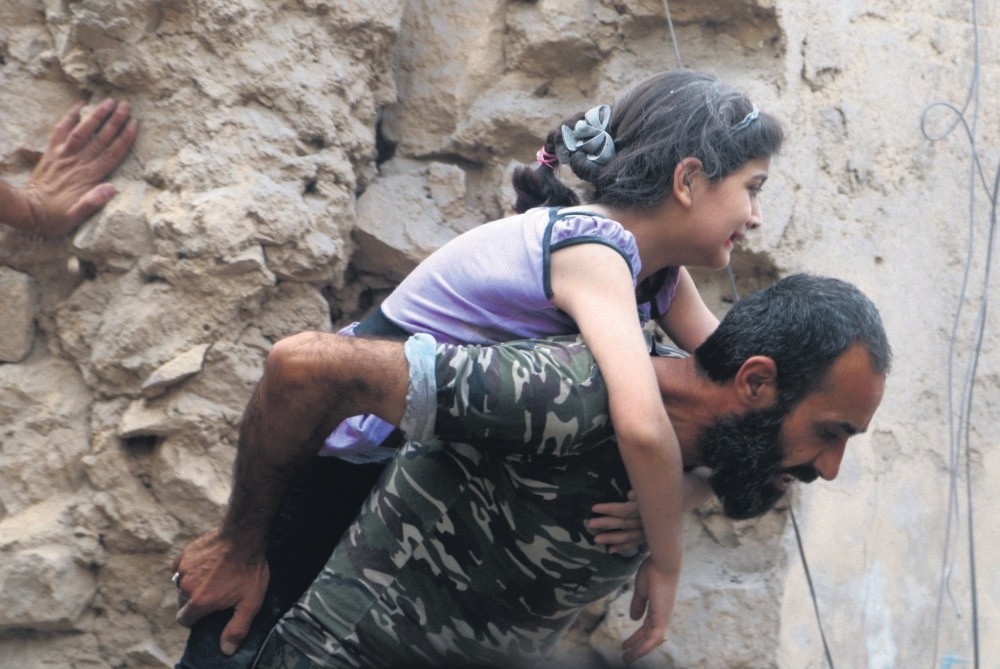 A man carries an injured girl after an airstrike on Aleppo's opposition held Kadi Askar in Aleppo.
by Daily Sabah with Wires Jul 13, 2016 12:00 am
Bashar Assad's forces, with assistance from Russian airstrikes, is continuing its siege of opposition groups in Aleppo and is attempting to cut a road leading into the opposition-held section of the city while the groups continue to wage fierce battles despite intensified airstrikes, some of which have reportedly targeted civilians.

The groups had previously launched an attack against regime positions in the historic center of Aleppo on Monday in response to an offensive on Castello Road, which is used for supplies and access, severing opposition-held areas under siege, where at least 250,000 people live.

Regime airstrikes killed 20 civilians on Monday in the Bab al-Maqam neighborhood of Aleppo, Syria Live Network (SLN) reported. One civilian was killed and many others were injured by a regime barrel bomb dropped on al-Jalloum. Many civilians were wounded in the attacks on the al-Ansari neighborhood.

Inflicting heavy casualties in the battlefield, the regime also intensified its aerial, artillery and missile bombardment on the neighborhoods of Bab Qensrin, al-Kallaseh, Bab al-Hadid and Bab al-Nasr in Aleppo's old city. Eyewitnesses said that the regime used cluster bombs and vacuum bombs in the airstrikes.

Elsewhere, jets believed to be Russian or Syrian also struck a fuel market in a town in the northwestern province of Idlib, killing 18 people and injuring scores more, according to a local rescue worker near the site.

An airstrike hit a local field hospital in the town of Ahsem in Idlib province, killing three people, including a child, an international charity and an aid worker said.

The assault was "a response to the [government] attempts to advance," Zakaria Malahifji of the Aleppo-based Fastaqim opposition group told Reuters.

He said insurgents had already made gains, and that much of the fighting was taking place in Aleppo's ancient old city, a renowned UNESCO World Heritage site now largely in ruins.

A witness reported fierce close-range clashes near the historic citadel where the opposition killed at least 20 army troops when they blew up a tunnel they dug underneath a regime post.

The city, Syria's largest before the war, has been a main battleground in the country's five-year war, and has seen an escalation of fighting after peace talks and a fragile ceasefire broke down earlier this year.

Its capture would be a strategic prize for the Assad regime, which controls the major population centers in western Syria, apart from opposition-held areas of Aleppo, and the city of Idlib. Opposition also control pockets of territory elsewhere in western Syria. Early on Monday more than 300 shells fired by opposition groups hit western, regime-held neighborhoods in Aleppo, killing five people and wounding dozens more, observers said.

A U.N. spokeswoman said that intensified fighting between Syrian government forces and rebels in contested Aleppo has completely cut off the only road allowing access for humanitarian aid deliveries into the rebel-held part of the city.

Alessandra Vellucci said on Tuesday that the Castello Road, considered the only access in and out of eastern Aleppo, has been rendered "impassable" since hostilities there worsened last week.

Vellucci said the U.N. estimates that 300,000 people depend on the road, which allows for the flow of supplies, goods and civilians into the area.

She said the U.N. continues to receive "distressing reports of aerial bombardment and shelling on civilian locations in both western and eastern Aleppo."

A reporter from Al-Jazeera was killed in a Russian airstrike in a town near the northeastern province of Idlib on Monday, the news outlet reported on Monday.

Ibrahim al-Omar, who became the sixth Al-Jazeera staff member to be killed in the Syrian civil war, was killed in a Russian airstrike in the town of Turmanin . The bombing also killed 13 people in a fuel market in the same town. Three people were also killed in another town in the Idlib countryside. Another Al-Jazeera team was targeted by Russian jets while en route to cover strikes in Huraytan and Anadan in the Aleppo countryside.

Syria has become the most dangerous area in the world for reporters. Reporters Without Borders counted 66 journalists killed in 2014, along with 119 were kidnapped and 178 were imprisoned.

According to a report by New York-based Committee to Protect Journalists, at least 84 journalists have been killed since the fighting began in 2011.
Last Update: Jul 13, 2016 12:02 pm
RELATED TOPICS