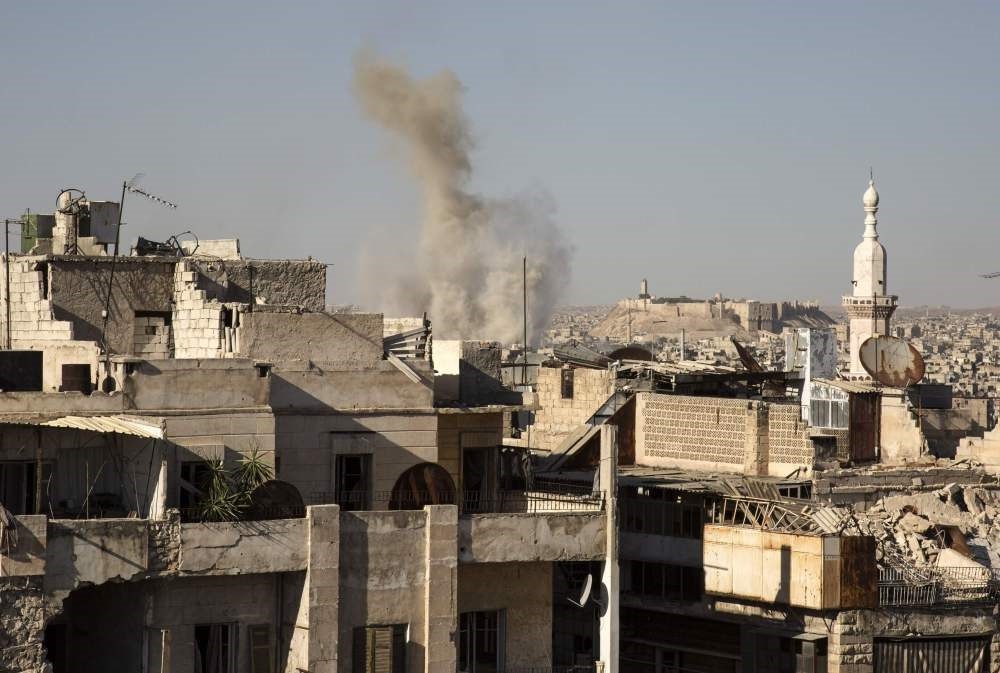 Smoke billows up following a reported strike by regime forces in an opposition-held neighborhood in the northern city of Aleppo, July 12.
by Daily Sabah with Wires Jul 14, 2016 12:00 am

Thousands of civilians in opposition-held areas of Aleppo risk starvation as regime forces continue their siege. Intensified fighting has completely cut off access to humanitarian aid deliveries in the opposition-held part of Aleppo

Bashar Assad's forces, with assistance from Russian airstrikes, are continuing their siege of opposition groups in Aleppo while the opposition continues to wage fierce battles despite intensified airstrikes, some of which have reportedly targeted civilians. Intensified fighting has completely cut off access to humanitarian aid deliveries in the opposition-held part of the contested city, a U.N. spokeswoman said Tuesday. Alessandra Vellucci told reporters that the passageway known as the Castello Road, which is considered the only access in and out of eastern Aleppo, has been rendered "impassable" since hostilities there worsened starting Thursday. The U.N. also said yesterday it was "deeply alarmed" by the situation in Aleppo.

Opposition areas of Aleppo have stockpiled enough basic supplies to survive months of siege by Syrian government forces even though some goods are running out, an opposition official said.

In the east of Aleppo, more than 100 people were lined up outside a bakery, hoping to get a daily ration of bread. "I've been standing here for about 45 minutes and there are still 40 people in front of me," said Ahmad al-Haj, in the line of around 150 people. At another nearby bakery, the line was even longer, with some 200 people gathered. With their route to the outside world cut, there is no new flour coming to the city's bakeries, and fuel to light their ovens is also now hard to find.

Opposition forces are fighting back in an attempt to reopen the Castello Road. The opposition does not expect the Syrian army and its allies to storm the populous, opposition-controlled sector of Aleppo, and is preparing for the possibility of a long siege.

Russian officials said Moscow was there to help Damascus in its fight because the road had been used to supply armed groups, but the United States urged Russia to put pressure on the Syrian government to cease its onslaught.

Prices of non-perishable staples have tripled and fresh produce has gone up by even more, if it can be found at all. A kilo of tomatoes, which are now in season, costs at least five times more than they did before the blockade.

The city council has stockpiled flour, wheat, fuel, sugar and rice, and residents were being urged to adapt to the new situation, Hassan said. "There are posters, pamphlets and there will be a press conference about this matter, so that the people are aware of the new situation, because the situation is very bad."

Amid the heavy fighting, government forces were able to effective cut off the Castello Road, raising fears of a new humanitarian crisis. The U.N. estimates that 300,000 people depend on Castello Road.

An opposition figure, Osama Taljo, warned on Tuesday at a press conference in Istanbul that the vast majority of those who are now encircled in Aleppo are civilians, mostly women and children.

"The opposition fighters have numerous ways of getting supplies and improvising roads but those at risk are the women and children. This is why we need the international community to take action," he said, speaking on behalf of various opposition factions in Aleppo.

"Russia, as a co-sponsor of the cessation of hostilities, should use its influence on the regime to help stop these attacks," Power said, referring to a truce agreed in February that subsequently unraveled.

Early on Monday more than 300 shells fired by opposition groups hit western, regime-held neighborhoods of Aleppo. The assault was "a response to the [government] attempts to advance," Zakaria Malahifji of the Aleppo-based Fastaqim opposition group told Reuters.

The city, Syria's largest before the war, has been a main battleground in the country's five-year war, and has seen an escalation of fighting after peace talks and a fragile ceasefire broke down earlier this year. Syria has been locked in a vicious civil war since early 2011, when the Bashar al-Assad regime cracked down on pro-democracy protests, which erupted as part of the Arab Spring uprisings, with unexpected ferocity and disproportionate force. Russia first began its air campaign in Syria on Sept. 30 of last year.
RELATED TOPICS