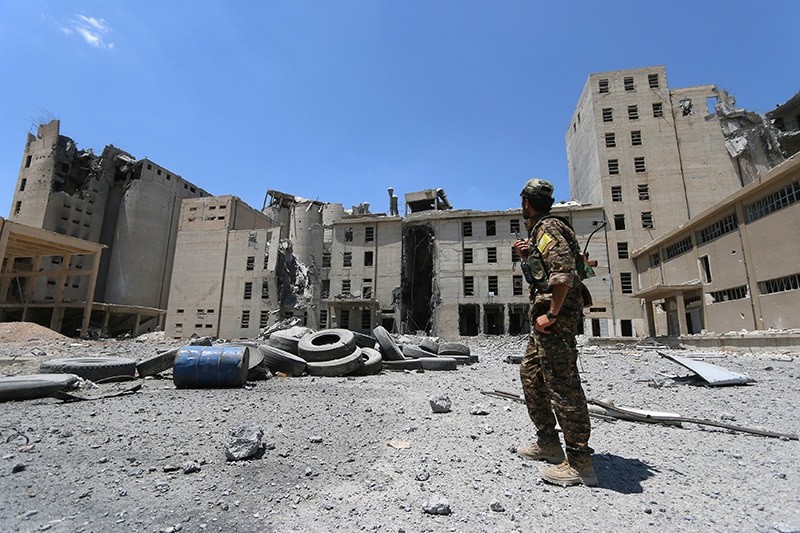 A Syria Democratic Forces (SDF) fighter walks in the silos and mills of Manbij after the SDF took control of it, in Aleppo Governorate, Syria, July 1, 2016. (Reuters Photo)
by Compiled from Wire Services Jul 19, 2016 12:00 am

Airstrikes on Daesh-held villages in northern Syria killed at least 85 civilians on Tuesday as intense fighting was underway between the militants and U.S-backed fighters, Syrian opposition activists and the extremist group said.

Residents in the area blamed the U.S.-led coalition for the strikes that targeted two villages, Tokhar and Hoshariyeh, which are controlled by IS, activists said. The villages are near the Daesh stronghold of Manbij, a town that members of the PYD-dominated U.S.-backed Syria Democratic Forces (SDF) have been trying to capture in a weeks-long offensive.

The Britain-based Syrian Observatory for Human Rights said at least 56 civilians, including 11 children, were killed in the strikes on the villages, which also wounded dozens. Another activist group, the Local Coordination Committees, said dozens of civilians, mostly families, were killed.

Turkey's official Anadolu Agency put the death toll at least at 85, adding that 50 civilians were also wounded in airstrikes.

The Daesh-linked Aamaq news agency claimed 160 civilians — mostly women and children — were killed in Tokhar alone, in a series of purportedly American airstrikes around dawn Tuesday.

Postings on a Facebook page show images of people, including children, as they were being put in collective grave, purportedly in the village of Tokhar. One photograph shows a man carrying the lifeless body of a child covered with dust while another shows a child, partly covered by a blanket, lying in a grave.

Tuesday's casualties come on the heels of similar airstrikes on the Daesh-held town of Manbij on Monday, when at least 15 civilians were reportedly killed.

Meanwhile, the headquarters of Daesh militants inside Manbij was captured as SDF forces pushed into the western part of the town over the weekend, the U.S. military said in a statement on Tuesday.

The headquarters, which was located in a hospital, was being used as a command center and logistics hub. The U.S.-backed Syrian rebels also took control of part of the town, enabling civilians in the area to flee the fighting, the statement said.

The rebels were continuing to battle Daesh on four fronts for control of Manbij, clearing territory as they pushed toward the center of the city, the statement said.

Daesh militants have staged counterattacks, but the Syrian rebels have maintained momentum with the help of air strikes by the U.S.-led coalition, the statement said. It said the coalition has carried out more than 450 air strikes around Manbij since the operation to take the town began.

The Manbij area has seen intense battles between Daesh extremists and the Kurdish-led fighters who have been advancing under the cover of intense airstrikes by the U.S.-led coalition.

If Manbij is captured by the U.S.-backed fighters, it will be the biggest strategic defeat for Daesh in Syria since July 2015, when the extremist group lost the border town of Tal Abyad. In neighboring Iraq, meanwhile, Daesh has been beaten back on several fronts, with Iraqi forces, aided by U.S.-led coalition airstrikes, having retaken the cities of Ramadi and Fallujah in western Anbar province.